Researchers Continue Development on a Method for Obtaining Lithium from Seawater

Researchers Continue Development on a Method for Obtaining Lithium from Seawater

At the University of Chicago, researchers continue to develop a new electrode that could one day be used on a larger scale to extract lithium more sustainably.

Researchers from the University of Chicago are developing a new kind of electrode that uses a process known as electrochemical intercalation to extract valuable elements (such as lithium) from seawater. The goal is to come up with a more accessible method of obtaining lithium for battery manufacturing that ensures a reliable supply and reduces environmental impact.

With the number of EVs on the market expected to increase, the demand for lithium is also expected to rise. Not only is the material used in EV components but in other electronics such as mobile phones, laptops, thermometers, hearing aids, MP3 players, and more. Lithium is a finite resource, so will an increase in demand and continued exploitation of this resource lead to shortages in supply in the future? This question is one that scientists have been contemplating and responding to with potential solutions. Scientists from the University of Chicago turned to the ocean to provide an answer to the question on lithium supply.

Assistant Professor at the Pritzker School of Molecular Engineering (PME), Chong Liu, along with fellow research colleagues are developing a new type of electrode that can extract lithium from seawater using electrochemical intercalation.

Electrochemical Intercalation is a process involving the insertion of ions into a specially designed carrier with the help of a liquid electrolyte. This carrier is then inserted into a cell with active material in it. The liquid electrolyte soaks the polymer sponge in which ions are stored, and they are released in line with the electrode potentials. The liquid electrolyte also prevents the precipitation of solid compounds so that the sponge can be reused. This process is one of many advanced battery technologies being explored to improve the battery life cycle and reduce their weight, cost, and environmental footprint.

In a news release from last month, Liu commented, “Our big motivation is to create a process that’s as environmentally friendly as possible.” Liu added, “Since we are taking an electrochemical approach, we completely avoid the need for intense heat or strong acids, and we get only the element we want — that’s single ion selectivity.” 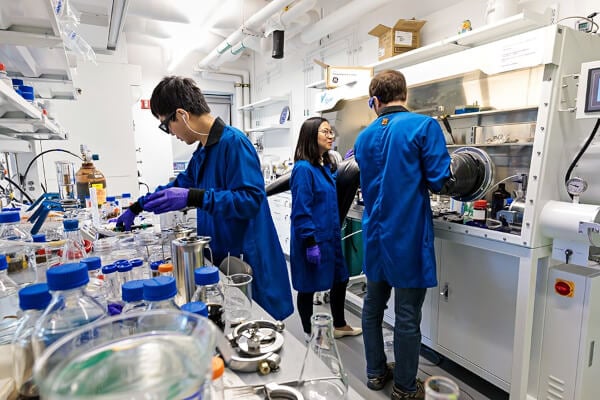 At Assistant Professor Liu’s lab materials are being explored to create a new type of electrode that can be used at an industrial scale for lithium extraction from seawater. Image used courtesy of the University of Chicago

Using highly specific electrode materials that combine the molecular processes of ion coordination and size confinement, Liu can extract and trap lithium. At present, the research team is taking time selecting a durable material for their new lithium-extracting electrodes that can be used at an industrial scale. Additionally, the material must be able to extract lithium from seawater at a reasonable rate.
On September 2, Liu was named one of 13 researchers to receive a proportion of a $30 million fund from the U.S. Department of Energy to expand the research. The fund aims to support research and technological advancements that can help secure critical materials supply for clean energy technologies.