Continuous advancements in consumer electronics and the automotive sector have led to an increase in the applications of lithium-ion batteries as they have high energy density and low self-discharge rates. Li-ion batteries are rechargeable batteries in which lithium-ion moves from the negative electrode to the positive electrode through an electrolyte during the discharge process (the process runs backward when charging). The Li-ion batteries can, however, be a safety hazard as they consist of flammable electrolytes. If damaged or incorrectly charged, it can lead to explosions.

The safety hazard is the main obstacle that hinders some commercial large-scale and small-scale applications of Li-ion batteries. One of the significant problems in battery safety is thermal runaway.

What is Thermal Runaway?

Thermal runaway is a process associated with increased current flow and power dissipation, accelerated by temperature increase. Thermal runaway can be thought of as uncontrolled positive feedback, a mechanism of chain reactions causing explosions and fires in the battery pack. 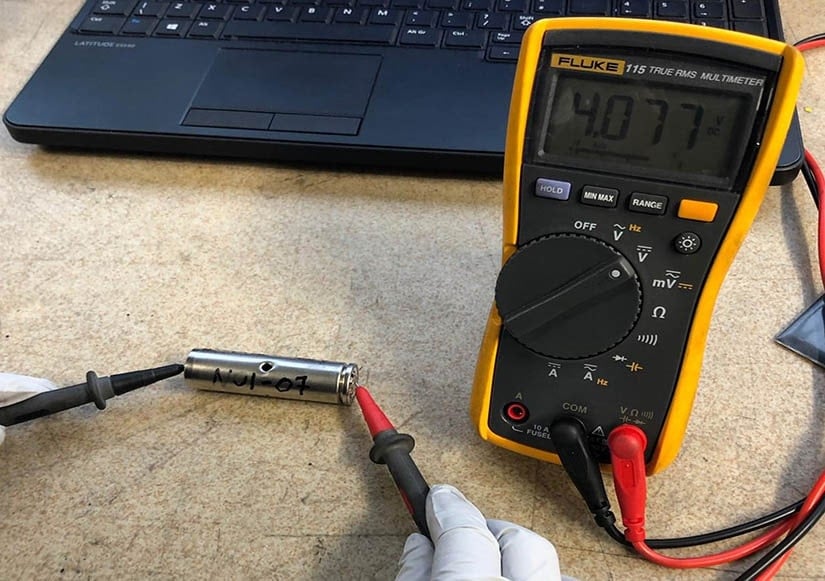 The newly developed cell holds its voltage despite having been penetrated with a nail. Image Courtesy of NREL.

Lithium-ion batteries are especially prone to thermal runaway. When a li-ion battery is overcharged or short-circuited, the overheating caused in these types of incidents cause battery currents to rise further, creating a domino effect. Eventually, the heat generated by the battery becomes significantly higher than the amount of heat that can be dissipated into the surroundings. During such events, the temperature rises exponentially, and stability is lost. This explosive process is referred to as thermal runaway.

The temperature rise, moreover, affects other batteries nearby, accelerating the "runaway" process.

To assess the li-ion battery safety, battery companies, automotive companies, and other battery users use a safety test called the nail penetration test. In this test, a metallic nail is penetrated through a charged li-ion cell at a prescribed speed to simulate an internal short circuit. A cell passes this test if there's no smoke or flame after the nail penetration.

Scientists at the NREL, along with researchers at NASA and in Europe, discovered a solution to prevent thermal runaway in li-ion batteries. In addition to NREL and NASA, the international research effort to understand what happens during a thermal runaway involved scientists from University College London, The Faraday Institution in Oxford, National Physical Laboratory in London, and The European Synchrotron in France. The work was originally published in the journal Cell Reports Physical Science.

Thermal runaway, as mentioned earlier, occurs very fast, and therefore, it is difficult to understand what exactly is the mechanism accelerating thermal runaway. Donal Finegan, a staff scientist at NREL whose work involves improving the safety and performance of lithium-ion batteries, says, "It's very fast and very difficult to understand what happens in that two seconds. But it's also very important to understand exactly what happens because it is the management of those two seconds that is important for improving the safety of batteries."

The scientists experimented on 18650 cells by driving a nail into them, triggering a short, and they captured what happened inside the batteries with great detail by high-speed X-ray imaging at 2000 frames per second.

Li-ion batteries use a current collector to conduct electricity from the negative and positive terminals. They concluded that isolating this conducting material from internal short circuits is a way to prevent thermal runaway. Here a metal-coated polymer current collector (PCC) is designed to disconnect internal short circuits by withdrawing from the high-temperature region.

Repeated experiments with nail penetration proved the addition of PCC to be very effective against thermal runaway. As the temperature increased due to an internal short circuit, PCC shrank to isolate the nail from the negative terminal and thus, shutting down the short circuit. The cells with PCC demonstrated a 100% success rate during nail penetration and retained a cell voltage of greater than 4.00V.