Researchers have developed a new machine learning-based protocol to optimize the fast-charging process for better performance without shortening the battery’s lifespan.

At the American Chemical Society’s biannual meeting last month, a team of researchers from Idaho National Laboratory presented a new machine learning-based method to power up different EV batteries to 90% in 10 minutes without wearing down the battery’s components. 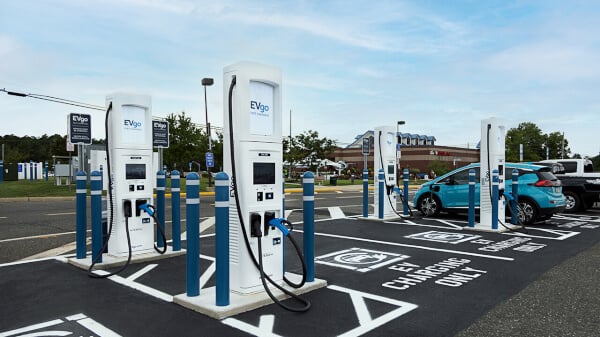 An EVgo fast-charging station along the Atlantic City Expressway in New Jersey. Image used courtesy of EVgo via Business Wire

Eric Dufek, one of the researchers and the head of Idaho National Laboratory’s Energy Storage and Electric Vehicle Department, noted in a statement that the new protocol would make the fast-charging experience comparable to filling up a regular gas-powered vehicle at a fueling station.

“We've significantly increased the amount of energy that can go into a battery cell in a short amount of time,” Dufek added. “Currently, we're seeing batteries charge to over 90% in 10 minutes without lithium plating or cathode cracking.”

The existing standard for EV fast-charging is direct-current fast charging (DCFC) equipment, capable of charging an EV up to 80% within 20 minutes to an hour. However, most plug-in hybrid (PHEV) models don’t support DCFC equipment, and fast-charging stations only account for about 15% of public supply ports in the U.S.

That leaves many electric car drivers with the slower alternatives: Level 1 and Level 2 charging. According to the Department of Transportation, Level 1 chargers take 40–50 hours to fully charge battery-electric vehicles (BEVs) and 5–6 hours to charge PHEVs from empty. Level 2 devices can charge BEVs in 4–10 hours and PHEVs in 1–2 hours.

Addressing the Limitations of Battery Design

Currently, the lithium-ion batteries used in most modern EVs degrade over time as ions move from the cathode to the anode while charging. With existing fast-charging protocols, limitations in how the ions migrate cause a build-up of lithium metal, leading to early battery failure or creating cracks in the cathode. This ultimately reduces the battery’s lifespan and, by extension, the range of the EV.

Dufek’s team used charging data to build a machine learning system to identify the potential pathways to failure and predict the battery’s lifecycle based on information about its condition while charging and discharging. This charging protocol, the researchers say, can be used to optimize speed while avoiding damage across different battery designs.

In a summary of their ACS presentation, the researchers noted that machine learning and other advanced analysis tools could help reduce the time and effort involved in predicting battery life, delineating failure modes and providing input to electrochemical models.

“Here, we discuss the use of machine learning to perform early failure mode classification on cells used for fast charge applications,” the researchers stated. “Using this information, it is then possible to feedback information for the refinement of advanced charging protocols designed to minimize specific aging pathways.”

A summary of the presentation at the Fall 2022 American Chemical Society meeting on Aug. 22. Screenshot used courtesy of ACS