"We have been successfully improving our gross and operating margins by pursuing sales growth and cost containment", said Bunsei Kure, President and CEO, Renesas Electronics Corporation. "Our second quarter semiconductor sales increased by 31.7% year on year mainly driven by strong demand for our products in the automotive and industrial markets.

"The growth is also attributed to the integration of Intersil and the dissipation of the impact from the Kumamoto earthquake that occurred in the same period a year ago. We expect to achieve traction in semiconductor sales and gross/operating margins during the coming quarter on a year-on-year basis." 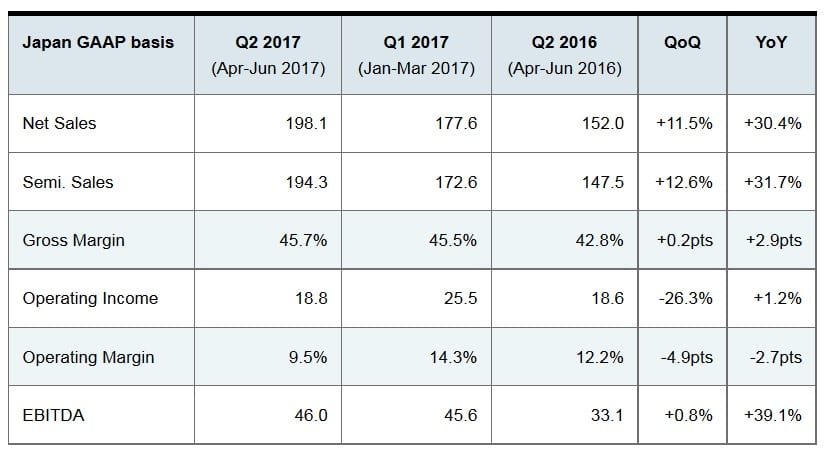 (1) Non-GAAP Basis: Results excluding non-recurring and certain other items. Non-GAAP basis excludes the impact of sales and profit/loss of Renesas SP Drivers, impact of profit/loss of LTE modem business and profit/loss from inventory buildup until the end of FY2016 ended December 2016. Starting from FY2017 ending December 2017, Non-GAAP definition was revised to exclude amortization of goodwill, amortization of purchased intangible assets, costs related to the Intersil acquisition, stock-based compensation cost and costs related to the offering. (Reference: The impact of inventory buildup in FY2017 Q2 was 0 yen in operating income.) See the separate sheet for reconciliation of Japan GAAP and Non-GAAP. (2) EBITDA: Operating income + Depreciation and amortization + Amortization of long-term prepaid expenses. Amortization of goodwill is also included for Japan GAAP-based EBITDA.

Following the completion of the acquisition of Intersil in February 2017, Renesas integrated Intersil into its operations and reformed its business organization into three business units. To align with this change, Renesas redefined its semiconductor sales breakdown to: "Automotive," "Industrial" and "Broad-based," the three application categories that constitute the main business of the Group, and "Other semiconductors," that constitute the businesses that do not belong to the above three application categories. 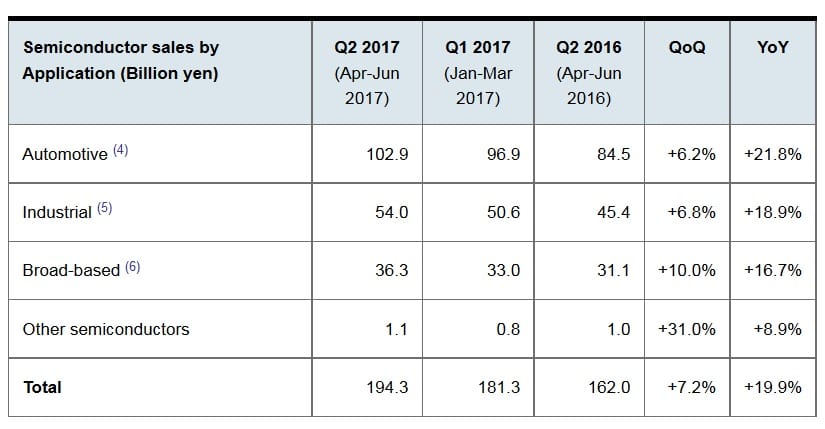 Second quarter consolidated net sales were 198.1 billion yen, up 11.5% quarter-on-quarter and up 30.4% year-on-year. Second quarter semiconductor sales were 194.3 billion yen, up 12.6% quarter-on-quarter. On a year-on-year basis, semiconductor sales increased by 31.7%, which can be attributed to the solid growth of the Renesas standalone sales, which excludes the sales of Intersil from the entire Renesas Group sales.

The growth is also attributed to the integration of Intersil and the dissipation of the impact from the Kumamoto earthquake that occurred in the same period a year ago. Automotive sales increased by 21.8% year-on-year on a pro-forma basis, driven by strong demand for Automotive Control and for Automotive Information products. Industrial and Broad-based sales increased year-on-year on a pro-forma basis by 18.9% and 16.7%, respectively, mainly due to the strong demand for factory automation, home appliance and analog semiconductors.

Non-GAAP gross margin was 45.7%, 1.8 points above the Company's guidance. On a sequential basis, gross margin increased by 0.2 points and improved by 1.4 points year-on-year, benefiting from the significant increase in sales and integration of Intersil.

Excluding seasonal headwinds, half-yearly OPEX (Operating expenses such as R&D and SG&A) was kept under control within the range of long-term financial targets.

Non-GAAP net income attributable to shareholders of parent company was 37.3 billion yen, due to special income of 14.4 billion yen, which can mainly be attributed to the insurance income related to last year's Kumamoto earthquake.

Capital expenditures for property, plant, equipment (manufacturing equipment) and intangible assets, were 24.2 billion yen in the second quarter. These expenditures are based on the amount of investment decisions made during the period and does not refer to the cash outlays in the cash flow statement.

Capital expenditures are based on the amount of investment decisions made for property, plant and equipment (manufacturing equipment) and intangible assets during the third quarter, and are expected to be 18.7% of net revenue