Nikola Labs has completed a key milestone toward bringing wirelessly powered products into the market, qualification of the INDRA wireless power receiving chip, which features best in class sensitivity and high efficiency, effective for Internet of things (IoT) applications, including sensors and low power edge devices.

The tiny INDRA chip, which measures 5.6mm x 3mm x 0.8mm – less than 1/16 the size of a penny – is a miniaturized version of Nikola Labs’ highly efficient radio frequency to direct current (RF to DC) energy harvesting circuitry, which is at the heart of Nikola Labs’ wireless power solutions. The INDRA chip was developed in collaboration with Texas Instruments and Skyworks Solutions, and includes technology from both companies.

The collaboration with Texas Instruments and Skyworks Solutions, respected leaders in the technology industry, enables Nikola Labs to deliver wireless power solutions at scale. INDRA was specifically designed to power Internet of things (IoT) devices, such as industrial sensors, that with the addition of wireless power can provide uninterrupted data without the need to ever change batteries. 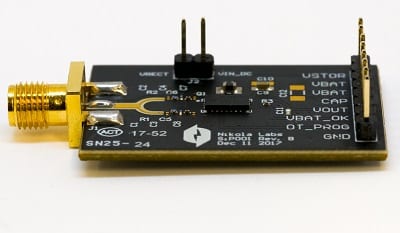 Current chips on the market require twice the input power (-12 dBm). The sample chips provided by Skyworks passed all qualifying tests and have now been approved for scale manufacturing, which will begin in May or June of this year.

“Qualifying INDRA is a watershed event because it enables us to finalize development of initial products that will start shipping later this year,” said Will Zell, CEO, Nikola Labs. “Having Skyworks and TI as collaborators has been a great experience and is critical for our goal of delivering wireless power technology and solutions to customers around the world.”

In achieving yet another goal, Nikola Labs re-launched its website. Showcasing the company, its technology, philosophy and team, the new site also features the verticals it serves – industry, smart city, smart home, health and medical, and space and military – and the ways in which it benefits each.