With the enhancement of the solar battery panel's efficiency and its expanded onboard area, Toyota achieved a rated power generation output of about 860W, which is approximately 4.8X higher compared to the commercial model Prius PHV equipped with a solar charging system.

In addition to considerably increasing its power generating output, the demo car utilizes a system that charges the driving battery both while the vehicle is parked and while it's being driven. The ability to charge while being driven is expected to result in considerable improvements in electric-powered cruising range and fuel efficiency. 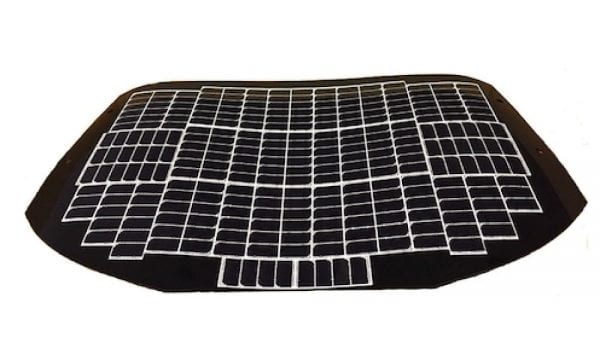 Toyota intends to conduct the trials under various driving conditions in Toyota City, Aichi Prefecture, Tokyo, and other areas.

The trials will obtain and verify various data including the power generation output of the solar battery panel and the amount the drive battery is charged. This data will then be used to develop an onboard solar recharging system.

Toyota will share a selection of trial data results with NEDO and Sharp. The PV-powered Vehicle Strategy Committee, sponsored by NEDO and other entities, will evaluate the benefits of the solar system based on improvements in CO2 emissions reductions and convenience, including the number of times a vehicle requires recharging.

The goal is to contribute to the creation of a new solar battery panel market, including the transportation sector, and find solutions for energy and environmental issues.

In April 2016, NEDO, a national research and development organization, established the PV-powered Vehicle Strategy Committee, which is made up of members from academia and industry. With the goal of finding solutions for energy and environmental issues in the transportation sector, the committee's research focuses on solar power systems. Sharp and Toyota serve as active committee participants.

The achievements the committee has made so far include estimates on the potential to achieve an output of 1kW in vehicles, despite the limited space for installing power systems using a solar battery module with a conversion efficiency of 30%. NEDO found that with such solar battery modules, a vehicle could completely forgo charging for one year, depending on driving patterns and usage conditions. NEDO also estimated the  CO2 emission reductions that would result.

The demo car features a solar battery panel that utilizes several solar battery cells with a conversion efficiency of 34%+. The shape of the module, its environmental durability, surface materials, and other characteristics are based on specifications for driving trials that Toyoda implemented.

The solar battery cell uses a thin film of about 0.03mm in thickness. This minimal thickness and its flexibility mean that the film can be made to fit the curved parts with limited space, including the vehicle hood, roof, and rear hatch door. The rated power generating output of the demo car is about 860W.