Michigan leaders hope to develop an initiative that focuses on creating a road that allows electric vehicles to charge without stopping.

Michigan Governor Gretchen Whitmer announced that the state will be building the nation’s first wireless charging infrastructure on a public road in the U.S. The project will enable electric vehicles (EVs) to charge as they drive on it. This initiative is being brought forward in an effort to combat climate change, as well as curb the use of fossil fuels. T

The wireless charging project is hoped to reduce anxiety over EV range and accelerate the transition to all-electric transit fleets in Michigan and in other areas of the U.S. For Michigan, the project will be a key step toward its goal of achieving carbon neutrality by 2050.

The Inductive Vehicle Charging Pilot is a partnership between the Michigan Department of Transportation (MDOT) and the Office of Future Mobility and Electrification.

In a recent press release, the Director of the MDOT, Paul C. Ajegba, said, “At MDOT, we know the future of mobility involves connectivity, and this initiative dovetails nicely with our other successes linking vehicles and infrastructure through technology,” said MDOT Director Paul C. Ajegba. “This is a model we will build on across the state to further promote the governor’s broad and ambitious vision.” 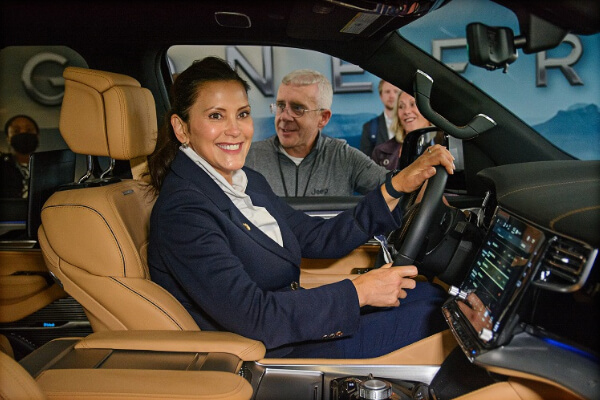 In the same press release, Governor Whitmer said, “Michigan was home to the first mile of paved road, and now we’re paving the way for the roads of tomorrow with innovative infrastructure that will support the economy and the environment, helping us achieve our goal of carbon neutrality by 2050.” Governor Whitmer added, “This project reinforces my commitment to accelerating the deployment of electric vehicle infrastructure in Michigan and will create new opportunities for businesses and high-tech jobs amidst the transition to electric vehicles.”

The Request for Proposal to design, fund, evaluate, iterate, test, and implement the Inductive Vehicle Charging Pilot was released on September 28. The Pilot is intended for a one-mile stretch of state-operated roadway in Wayne, Oakland, or Macomb counties.

In September of this year, Governor Whitmer announced the launch of two other initiatives: the Lake Michigan EV Circuit and the Michigan Revolution for the Electrification of Vehicles Academy/Academies (MiREV). The former initiative is hoped to further expand upon Michigan’s EV infrastructure by providing DC fast charging or level 2 chargers along the Lake Michigan EV Circuit. This will allow coastal and rural communities, state and national parks, and tourism attractions to interconnect within a wider EV infrastructure network. The MiREV is intended to provide the workforce of the future with the tools and resources to prime talent for current, emerging, and future jobs, as well as career pathways for automotive mobility and the electrification industry.

With these EV infrastructure projects and initiatives hitting off, Michigan appears to be setting the stage for sustainable mobility in the U.S. and is on its way toward a carbon-neutral future.