Fuel cells and water electrolyzers that are cheap and efficient will form the cornerstone of a hydrogen fuel based economy, which is one of the most promising clean and sustainable alternatives to fossil fuels. These devices rely on materials called electrocatalysts to work, so the development of efficient and low-cost catalysts is essential to make hydrogen fuel a viable alternative.  Researchers at Aalto University have developed a new catalyst material to improve these technologies. The image above shows how the plates and long tubes of the grapehene and CNTs in the catalyst look in an electron microscope (Dr. Kimmo Mustonen / University of Vienna).

The oxygen reduction reaction (ORR) and oxygen evolution reaction (OER) are the most important electrochemical reactions that limit the efficiencies of hydrogen fuel cells (for powering vehicles and power generation), water electrolyzers (for clean hydrogen production), and high-capacity metal-air batteries.

Physicists and chemists at Aalto collaborating with researchers at CNRS France, and Vienna in Austria have developed a new catalyst that drive these reactions more efficiently than other bifunctional catalysts currently available. The researchers also found that the electrocatalytic activity of their new catalyst can be significantly altered depending on choice of the material on which the catalyst was deposited. 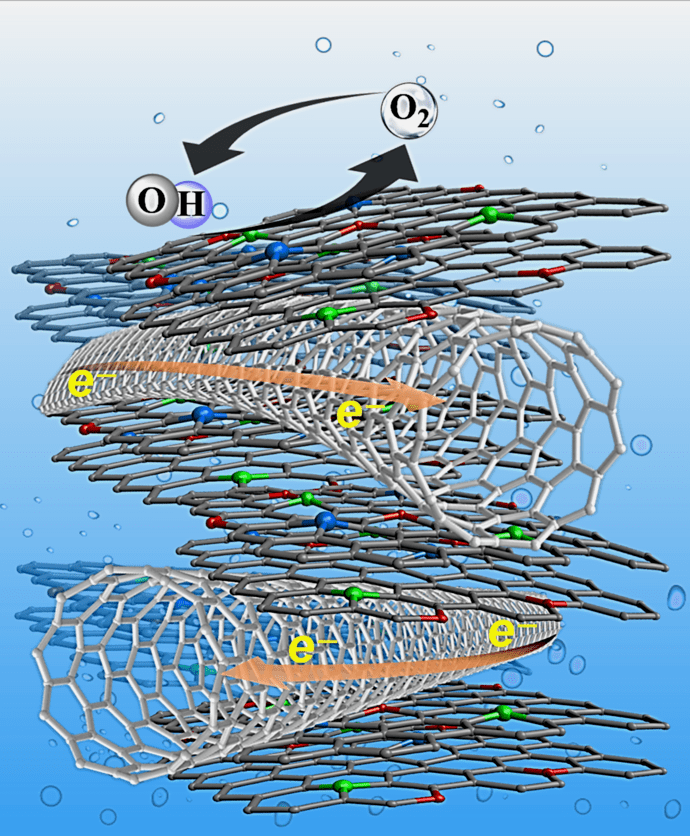 Simplified representation of the structure of the catalyst.

“We want to replace traditional expensive and scarce catalysts based on precious metals like platinum and iridium with highly active and stable alternatives composed of cheap and earth-abundant elements such as transition metals, carbon and nitrogen.” says Dr Mohammad Tavakkoli, the researcher at Aalto who led the work and wrote the paper.

In collaboration with CNRS the team produced a highly porous graphene–carbon nanotube hybrid and doped it with single atoms of other elements known to make good catalysts. Graphene and carbon nanotube (CNT) are the one‐atom‐thick two- and one‐dimensional allotropes of carbon, respectively, which have attracted tremendous interest in both academia and industry due to their outstanding properties compared more traditional materials. They developed an easy and scalable method to grow these nanomaterials at the same time, combining their properties in a single product.

“We are one of the leading teams in the world for the scalable synthesis of double-walled carbon nanotubes. The innovation here was to modify our fabrication process to prepare these unique samples,” said Dr Emmanuel Flahut, research director at CNRS.

In this one-step process, they could also dope the graphene with nitrogen and/or metallic (Cobalt and Molybdenum) single-atoms as a promising strategy to produce single-atom catalysts (SACs). In catalysis science, the new field of SACs with isolated metal atoms dispersed on solid supports has attracted wide research attention because of the maximum atom-utilization efficiency and the unique properties of SACs. Compared with rival strategies for making SACs, the method used by the Aalto & CNRS team provides an easy method which takes place in one step, keeping costs down.

Catalysts are usually deposited on an underlying substrate. The role this substrate plays on the final reactivity of the catalyst is usually neglected by researchers, however for this new catalyst, the researchers spotted the substrate played an important part in its efficiency. The team found porous structure of their material allows to access more active catalyst sites formed at its interface with the substrate, so they developed a new electrochemical microscopy analysis method to measure how this interface could contribute to catalyze the reaction and produce the most effective catalyst.

They hope their study of substrate effects on the catalytic activity of porous materials establishes a basis for the rational design of high-performance electrodes for the electrochemical energy devices and provides guidelines for future studies.