Far Resources Ltd announced that the company is acting as a principal sponsor of the Electric Blue Marine Power Project aimed at a commercial demonstration of lithium battery capabilities for solar energy-based marine propulsion. For the project, Far Resources will work alongside BattMat Technologies, Inc.

Lithium batteries are increasingly being adapted for renewable energy storage. However, promising but less developed applications for lithium batteries is for marine propulsion. More than seven years ago, lithium batteries were employed in the renowned but costly ($15 million) Planet Solar project, which circled the globe. The project drew power from intermittent solar energy. (See image above).

Far Resources points out that since then, the functionality of lithium batteries and solar panels along have improved substantially. Electric motor performance has also improved.

Electric Blue Power, LLC is implementing the Electric Blue Marine Power Project to demonstrate the use of lithium battery technologies in a sustainable, efficient, and economical marine propulsion system that can power vessels continuously on solar energy.

The MaxSolarProp© system incorporates lithium iron phosphate batteries together with fixed and flexible solar panels. The system also uses a high-efficiency electric motor and proprietary electronics to optimize the inter-operation of panels and motor along with the batteries and the battery management system.

Electric Blue has embarked on a voyage along the iconic Great Loop which includes waterways of the Eastern US from Florida along the East Coast to the Washington, D.C. area and New York City and then inland on the Erie Canal to Buffalo, New York. The Great Loop then continues on across the Great Lakes to the Midwest and down the Mississippi to the Gulf of Mexico. 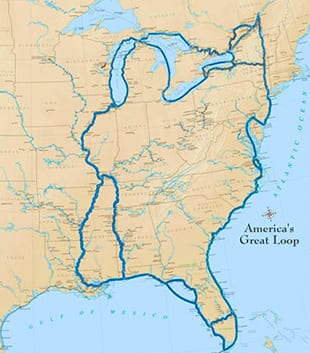 The project hopes to demonstrate that high-performance and long-life lithium iron phosphate batteries are stable and reliable for solar-only and slower speed marine uses. Such uses include automated or manned hydrological mapping of inland and coastal waterways, surveillance and patrol, and ship-to-shore supplemental power for remote islands, including during disasters or power emergencies. Other potential applications for the batteries and the technology include providing power for floating platforms for scenic viewing and film-making.

Far Resources says the system's design is ready for use to replace diesel engines in inboard sailboats and, with hybrid power back-up, larger vessels for river and inter-island barge transportation.

Far's participation in the project is pursuant to its partnership, announced in March, with technology and consulting firm BattMat, to devise an advanced strategy for marketing Far's lithium resources.

Also as part of the project, BattMat plans to identify new technology-driven trends in the battery materials sector and strengthen its strategic standing and recognition within the battery and technology industries.

"We are very excited by this opportunity to market Far in this rapidly expanding sector," stated Toby Mayo, President of Far. "Our participation in Electric Blue represents part of the company's developing strategy to incubate high-potential, proprietary battery and renewable technologies, while also positioning the company to participate in the future licensing of successful, emerging technologies as they develop towards commercialization. This is seen by management as a bona fide means of adding shareholder value through new initiatives in the battery and renewables sector while introducing potential investors and partners for financing and forging closer ties in this growth industry."

Wheelbarger recently joined Far's advisory board to bring expert knowledge in the development of new battery-related power and other technologies, including lithium-based batteries such as those used on the Electric Blue Solar Yacht.

At stops in the Washington, D.C. area, in New York City, and at certain other points along the Great Loop, Far Resources invites investors to meet Mr. Wheelbarger and members of the team where they will be available to answer questions about the battery system.