Evidence of Superconductivity at up to 260°K Observed

Evidence of Superconductivity at up to 260°K Observed

Researchers at George Washington University have found evidence of superconductivity at relatively high temperatures. They are one step closer to finding a room temperature superconductor. The quest for this so far theoretical material has tantalized material scientists around the world.

Until recent years, superconducting materials were thought to have to cool to very low temperatures (minus 180°C or -292°F), which limited their application.

"Superconductivity is perhaps one of the last great frontiers of scientific discovery that can transcend to everyday technological applications," Maddury Somayazulu, an associate research professor at the GW School of Engineering and Applied Science, said. "Room temperature superconductivity has been the proverbial 'holy grail' waiting to be found, and achieving it -- albeit at 2 million atmospheres -- is a paradigm-changing moment in the history of science."

The researchers created a metallic, hydrogen-rich compound at the very high pressure of roughly 2 million atmospheres. They used diamond anvil cell devices to produce high pressures via squeezing together tiny samples of lanthanum and hydrogen.

They then heated the samples and observed significant changes in structure. This heating produced a new structure, LaH10, which the researchers previously predicted would be a high-temperature superconductor. With the sample at high pressures, the team saw a reproducible change in electrical properties.

In one of the primary tests to help confirm superconductivity, they measured significant reductions in resistivity when the sample cooled below 260°K (minus 13°C, or 8°F) at 180-200 gigapascals of pressure, showing evidence of superconductivity at near-room temperature. In subsequent tests, the researchers saw this transition occurring at even higher temperatures of up to 280°K. 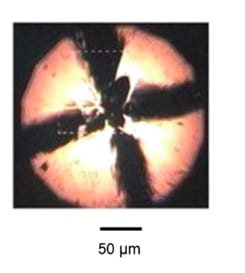 Throughout the experiments, the researchers also employed X-ray diffraction to witness the same phenomenon. These X-ray diffraction observations were performed at Argonne National Laboratory in Argonne, Illinois using a synchrotron beamline of the Advanced Photon Source. The graph above shows the normalized electrical resistance of the LaH10±x sample characterized by x-ray diffraction and radiography. (graph atop article--courtesy of Physical Review Letters -- see publication).

"We believe this is the beginning of a new era of superconductivity," Russell Hemley, a research professor at the GW School of Engineering and Applied Science, said. "We have examined just one chemical system -- the rare earth La plus hydrogen. There are additional structures in this system, but more significantly, there are many other hydrogen-rich materials like these with different chemical compositions to explore. We are confident many other hydrides -- or superhydrides -- will be found with even higher transition temperatures under pressure."

The researcher team included Dr. Somayazulu, Dr. Hemley, and Muhtar Ahart, an associate research professor at the GW School of Engineering and Applied Science. The team also included collaborators at Argonne National Laboratory and the Carnegie Institution of Washington.

The team is working to add experimental capabilities on the beamline at the Advanced Photon Source and elsewhere that would enable them to quantify the critical parameters of this class of superconductors. In the future, the team hopes to gain a deeper understanding of the underlying physics of superconductors and to also more fully understand its numerous practical applications.

The study was published in the journal Physical Review Letters.