Today’s lithium-ion battery was invented so long ago, there are not many more efficiencies to wring out of it. Now researchers at the Department of Energy’s Lawrence Berkeley National Laboratory (Berkeley Lab) report major progress in cathodes made with so-called “disordered” materials, a promising new type of lithium battery.

In a pair of papers published this month in Nature Communications and Physical Review Letters (PRL), a team of scientists led by Gerbrand Ceder has come up with a set of rules for making new disordered materials, a process that had previously been driven by trial-and-error.

They also found a way to incorporate fluorine, which makes the material both more stable and have higher capacity. 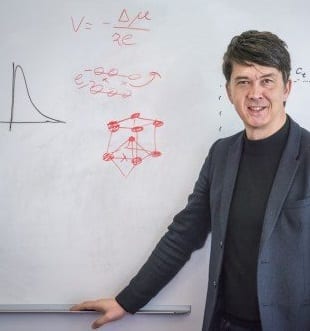 “This really seems to be an interesting new direction for making high energy density cathodes,” said Ceder, a Senior Faculty Scientist at Berkeley Lab who also has an appointment at UC Berkeley’s Department of Materials Science and Engineering.

“It’s remarkable that all the disordered rock salts people have come up with so far have very high battery capacity. In the PRL paper we give a guideline for how to more systematically make these materials," Ceder continued.

The benefits of disorder

The cathode material in lithium batteries is typically “ordered,” meaning the lithium and transition metal atoms are arranged in neat layers, allowing lithium to move in and out of the layers. A few years ago, Ceder’s group discovered that certain types of disordered material could store even more lithium, giving batteries higher capacity.

(a) TM site distortion in the LiTMO2 ground state structures (layered α−NaFeO2 structure and γ−LiFeO2 structure) and in the SQS of all first and second-row TMs except Mn and Tc. The distortions are decomposed into contributions from different normal mode symmetry groups. The first normal mode (ν1) corresponds to an isotropic scaling and is not considered. ν2 is the Jahn-Teller distortion, ν3 corresponds to bending distortions, ν4 to twisting, and ν5 describes the displacement of the TM from the center of the site. (b) Schematic of the normal modes of an octahedral TM site grouped by symmetry (rotations and translations are not shown) (click on image to enlarge)

The lead author of the PRL paper, “The electronic-structure origin of cation disorder in transition-metal oxides,” is Alexander Urban, a Berkeley Lab postdoctoral fellow.

“Despite their attractive properties, discovering new disordered materials has been mostly driven by trial-and-error and by relying on human intuition,” Urban said. “Now we have for the first time identified a simple design criterion to predict novel disordered compositions. The new understanding establishes a relationship between the chemical species, local distortions of the crystal structure, and the tendency to form disordered phases.” 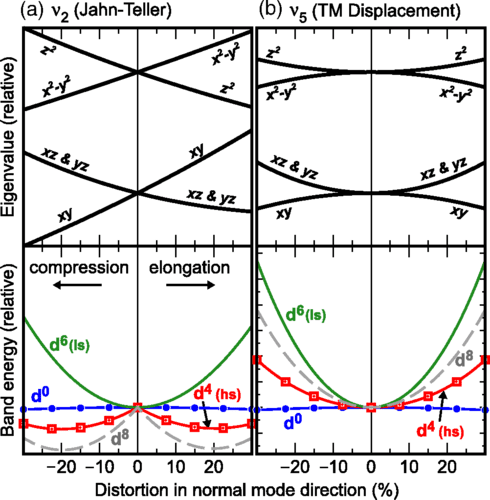 Change of the electronic states (top) and the band energy (bottom) upon distortion of an octahedral TM site in the direction of (a) the Jahn–Teller mode (ν2) and (b) the TM-displacement mode (ν5). The band energies for four electronic configurations are shown: d0 (blue circles), d4 high spin (hs, red squares), d6 low spin (ls, green line), and d8 (gray dashed line). The energies shown in panel (a) are based on the conventional Jahn–Teller mode (compression or elongation in z direction) which is a linear combination of the normal coordinates of type ν2 shown in Fig. 1. The energy and distortion scales are equal for both normal modes. The labels in the top panels indicate the TM d orbitals that contribute most for distortions along the Cartesian z direction.

The other advantage of using disordered materials is the ability to avoid the use of cobalt, a limited resource, with more than half the world’s supply existing in politically unstable countries. By moving to disordered rock salts, battery designers could be free to use a wider range of chemistries. For example, disordered materials have been made using chromium, titanium, and molybdenum.

“We want the ability to have more compositional freedom, so we can tune other parameters,” Ceder said. “There are so many properties to optimize – the voltage, the long-term stability, whether it’s easy to synthesize – there’s so much that goes into taking a battery material to a commercial stage. Now we have a recipe for how to make these materials.”

How and why to fluorinate batteries

Another major advance in lithium-ion batteries is reported in the Nature Communications paper, “Mitigating oxygen loss to improve the cycling performance of high capacity cation-disordered cathode materials,” which shows that disordered materials can be fluorinated, unlike other battery materials. Fluorination confers two advantages: it allows more capacity and makes the material more stable. In a battery, the increased stability would translate into a device with long cycle life and that is less likely to catch fire.

The lead author of the paper, Jinhyuk Lee, formerly a Berkeley Lab researcher, worked with scientists at Berkeley Lab’s Advanced Light Source (ALS), a source of X-ray beams for scientific research, to conduct in situ experiments.

“The ALS was really important to understand the mechanism by which we get higher capacity,” Ceder said. “What’s really cool is you can look at the battery while it’s operating, and look at the electronic structure of the cathodes. So you learn how it charges and discharges, where the electrons go, which is a crucial aspect of charge storage.”

ALS scientists Shawn Sallis and Wanli Yang are co-authors, as is Bryan McCloskey of Berkeley Lab. “His group was crucial in showing these materials are more stable and don’t lose oxygen,” Ceder said.

Now that they have demonstrated the concept, Ceder plans to follow up by trying to add even more fluorine to the materials.

“New cathode materials is the hottest direction in Li-ion batteries,” Ceder said. “The field is a bit stuck. To get more improvements in energy storage there are only a few directions to go. One is solid-state batteries, and the other is to keep improving the energy density of electrode materials. The two are not mutually exclusive. This research line is definitely not exhausted yet.”

The research was supported in part by DOE’s Office of Energy Efficiency and Renewable Energy’s Vehicle Technologies Office. The Molecular Foundry and the National Energy Research Scientific Computing Center (NERSC), both at Berkeley Lab, were used in the research. The ALS, Molecular Foundry, and NERSC are DOE Office of Science User Facilities.