Companies Look Toward Sustainability When it Comes to EV Batteries

Companies Look Toward Sustainability When it Comes to EV Batteries

With the growth of the EV market, manufacturers and research groups hope to mitigate the waste associated with batteries.

As the Electric Vehicle (EV) market continues to grow, demand for materials and an abundance of batteries that have reached End of Life (EOL) will both skyrocket. Luckily, both of these problems go hand in hand with one another, and many companies are looking into that symbiotic relationship.

First, German power electronics company, Elektro-Automatik, has created a product to help ready EOL EV batteries for their next phase of life. Their bidirectional power supply, the EA-PSB 10000, and their regenerative load, the EA-ELR 10000 are both used hand in hand to prepare discarded batteries for use, according to a press release. 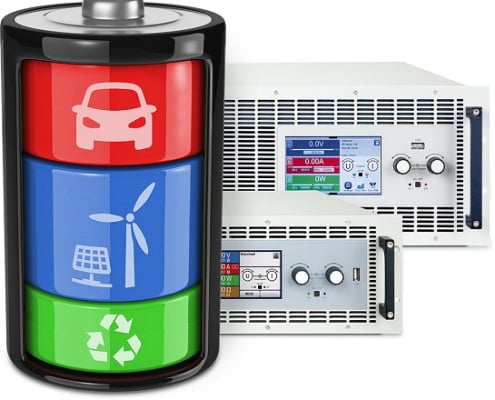 Once EV batteries have had their storage capacity degraded to the point that they cannot be used within their original application, it still has a lot of capacity left over, retaining about two-thirds of its storage capacity, according to the Union of Concerned Scientists. For this reason, batteries can find themselves within solar and wind energy storage systems. However, prior to this, they must be tested, and that is the need in which the EA-PSB 10000 fulfills. This unit is able to both charge them to near 100% to measure remaining capacity and fully discharge them as well. It has the highest power density on the market with 30kW in 4U, and 1.92MW possible in a rack. This can allow it to perform mass testing without an issue. Furthermore, it can easily switch between acting as a source and sink, offering time savings.

While the EA-PSB 10000 allows batteries that still have some juice, all batteries will inevitably reach a point that they can no longer be used. When this occurs, their materials can be recycled, requiring disassembly. This can be quite dangerous in terms of batteries, because if they are not properly prepared prior to dismantling, due to the hazardous materials within them, and the tendency for these batteries to explode during dismantling.

The EA-ELR 10000 helps the preparation of recyclable batteries by completely discharging them. The EA-ELR 10000 has the same power density characteristics as the EA-PSB 10000 and can extract residual charges from the battery and feedback into the grid with an efficiency of 96%. This not only will discharge the batteries to allow safe disassembly, but the grid regeneration aspect will reduce operating costs, heat generation, and environmental impact. The EA-ELR 10000 also can be equipped with a sealed enclosure with 90% efficient water cooling for more taxing applications.

While Elektro Automatik is creating products to aid in battery redeployment and recycling, there is still much to be done on an infrastructure level to support this budding industry. In Europe alone, projections predict there will be 30 million electric cars. This will greatly increase the amount of lithium-ion batteries that need to be produced, and then eventually recycled. However, the current market for recycled batteries on a global scale is hypothesized by many to be around only 5% according to Dr. Anderson, the co-director of the Birmingham Centre for Strategic Elements and Critical Materials.

Many companies however are working to help fix this issue. Nissan sold batteries from its Leaf vehicle to power automated guided vehicles in its factories. Furthermore, Volkswagen has opened its first recycling plant with the expected capability to recycle 3,600 battery systems per year. Renault has even started recycling all lithium-ion batteries of theirs, but that only results in a couple hundred a year. While these are all great movements in ideology, the results are still quite small in terms of the projected demand we face.

For this reason, the Faraday Institute, through the ReLiB project, aims to optimize the recycling method for Li-Ion batteries, making it more streamlined. One of the current aspects the project looks to change is the making of a “black mass”, a mixture of lithium, manganese, cobalt, and nickel, which from this point requires excessive work to recover any materials in a usable form.

On top of the motivation of supply as well as recycling efficiency, battery manufacturing itself is looking to adapt. As demand continues to increase, the availability of materials is a real bottleneck according to The Union of Concerned Scientists. Specifically, high cobalt-concentration cathode chemistries are being replaced by reduced cobalt configurations such as Nickel-Manganese-Cobalt (NMC), Nickel-Cobalt-Aluminum oxide (NCA), along with a cobalt-free Lithium-Iron-Phosphate (LFP) chemistry. Not only do these chemistries address the critical material in cobalt, but they also have shown increased energy densities.

Overall, the EV battery industry will need to find some innovative solutions in terms of supply chain and material usage to meet the inevitably rising global demand of the future. Streamlined testing, reusing EOL batteries, recycling depleted ones, and finding alternative chemistries to allow flexibility in material usage are all solutions to these issues. Not only will the EV market aim to help lower global carbon emissions, but the foundation is being laid for this industry to power itself.