$60M From DOE to go Toward Clean Hydrogen Tech

$60M From DOE to go Toward Clean Hydrogen Tech

Last week, the U.S. Department of Energy (DOE) announced $40 million in funding for advancing the development and distribution of clean hydrogen technologies as well as $20 million to create a North American university consortium, according to a DOE news release.

Investments to Advance Tech, Empower States, and Decarbonize the Grid 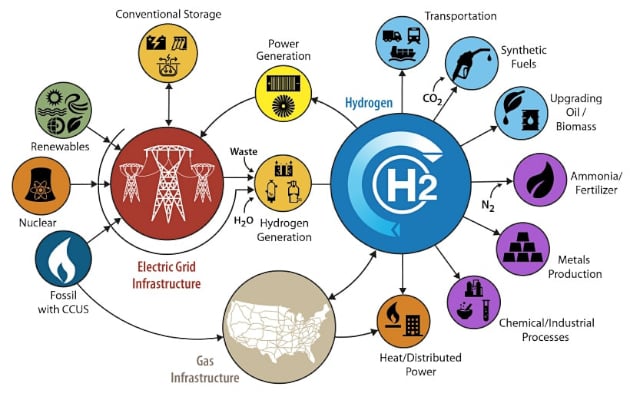 Technology advancements like harvesting sunlight to create solar fuels, improvements in the detection of hydrogen emissions, building high-density, low-pressure hydrogen storage units, and lowering the cost of hydrogen fuel cells for medium and heavy-duty transportation uses are all among areas the funding will support, according to the DOE’s news release.

More than 10 million tons of the most prevalent element on earth are produced in the U.S. yearly through processes like steam reforming natural gas or electrolysis. Most commercial hydrogen, around 95%, is produced through the fossil fuel industry, according to the DOE.

Steam reforming natural gas, partial oxidation of heavier hydrocarbons or coal gasification are all carbon-intensive ways of making grey hydrogen, according to a recent article from EE Power. Harvesting grey hydrogen contributes to climate change because carbon dioxide is released into the atmosphere.

The production of blue hydrogen uses the same methods as grey hydrogen, but the caveat is the carbon dioxide emissions are captured and placed in storage. This method has the backing of the fossil fuel industry.

Green hydrogen is produced through carbon-free processes like electrolysis, where electricity is used to separate the hydrogen molecules from oxygen in the water. The electricity also needs to be “green,” sourced from renewable energy sources like solar, wind or hydroelectric, for this process to truly be considered clean. 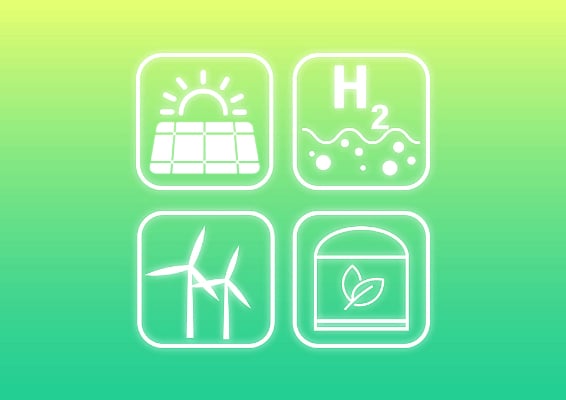 Hydrogen has the ability to become one of the most versatile fuels in the U.S., and the DOE is rounding up stakeholders to support the expansion of the hydrogen energy infrastructure across the nation.

By encouraging stakeholders like power generators and technology developers to respond to requests for information, leverage early-stage research and development resources, and provide data from industry-led demonstrations, the DOE will be able to integrate new technologies into the existing systems through the [email protected] initiative.

Hydrogen is an important fuel in the chemicals industry, including liquid chemicals. Other industries are also revealing their compatibility with hydrogen as fuel, like steel manufacturing and transportation. Where lithium batteries that have taken the electric vehicle industry by storm cannot be used for heavy-duty vehicles, marine, data center and rail applications, hydrogen can.

The expanded use of hydrogen as an energy source will allow zero emissions in transportation and stationary, remote and portable power applications. The expanding applications of the developing energy source would allow for more flexible grid support and storage by being used as a responsive load.

Through the Hydrogen Shot and University Research Consortium on Grid Resilience funding opportunity announcement, three years of funds will be used to create a university consortium with members across North America.

The consortium will focus on developing a more resilient, decarbonized grid in collaboration with universities from Mexico and Canada while addressing issues around cross-border grid sharing and electrical interconnections.

“DOE is laser-focused on building a future with cleaner manufacturing, transportation, and electricity—all of which can be achieved with clean hydrogen technology,” Jennifer M. Granholm, U.S. Secretary of Energy, said in the news release. “These investments will advance cutting-edge technologies and empower state, territory, and tribal leaders to make the best, informed decisions about improving and decarbonizing the electric power grid.”

The funding will help the DOE leverage industry investments in clean technologies to reach President Joe Biden’s goal of a net-zero carbon economy by 2050. The DOE is looking for cooperative agreements lasting two to four years and is encouraging stakeholders involved in various industries representing diverse, minority-serving institutions to apply.

The application for both funding opportunities is a two-part process that includes a concept paper, due by Sept. 23, and a full application, due on Dec. 1.