Batteries might seem like they come in every shape and size that you can imagine. But as electronic devices become tinier and skinnier without reducing their power and energy demands, they challenge engineers to design batteries that can fit into smaller and smaller spaces without compromising on performance.

Researchers at the University of California, Los Angeles (UCLA) have used non-traditional techniques to fashion one possible solution - a powerful 3D lithium ion battery with a footprint on the order of one hundred grains of salt. Their work appeared May 3 in the journal Joule.

"For small sensors, you need to re-design the battery to be like a skyscraper in New York instead of a ranch house in California," says senior author Bruce Dunn, a professor of materials science and engineering at UCLA. "That's what a 3D battery does, and we can use semiconductor processing and a conformal electrolyte to make one that is compatible with the demands of small internet-connected devices."

Even the most innovative two-dimensional batteries are limited in the shapes they can take - the basic battery takes a slice of anode and a slice of cathode and packs an ion-conducting electrolyte between the two to complete the circuit.

On the other hand, there are in principle innumerable ways to craft a 3D anode and a 3D cathode that snap together like puzzle pieces (still necessarily separated by a small amount of electrolyte).

The setup chosen by Dunn's group is called a "concentric-tube" design, where an array of evenly spaced anode posts are covered uniformly by a thin layer of a photo-patternable polymer electrolyte and the region between the posts is filled with the cathode material.

Despite this apparent simplicity, many researchers have only been able to build half of a 3D battery, creating anodes and cathodes that are stable on their own, but fail when trying to assemble these electrodes into one functional battery.

Meanwhile, nearly all of the 3D batteries which have been assembled have not been significantly better than ordinary two-dimensional versions. Dunn and postdoctoral scholars, Janet Hur and Leland Smith, overcame these hurdles by taking methods normally used to make semiconductors and modifying them to carve silicon into a grid of precisely-spaced cylinders that they wanted for the anode.

"That's something the battery world just does not do," Dunn says.

To complete the battery, they applied thin layers of electrolyte to the silicon structure and poured in a standard lithium-ion cathode material, using the anode as a mold to ensure that the two halves would fit together just right.

The resulting battery achieved an energy density of 5.2milli-watt-hours per square centimeter, among the highest reported for a 3D battery, while occupying a miniscule 0.09 square centimeter footprint and withstanding 100 cycles of charging and discharging. 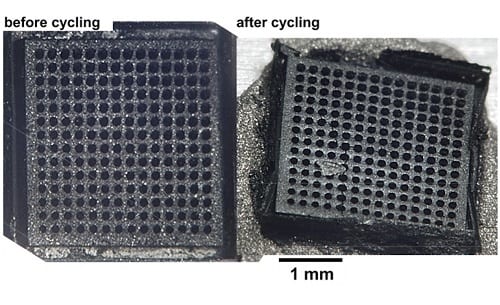 Optical micrographs of 3D microstructured cathode before and after cycling.

Dunn cautions that this particular 3D battery has not yet reached its full potential, as he hopes that he and his team can boost its energy density with further tuning of battery components and assembly.

"Another challenge with batteries is always the packaging," Dunn adds. "You need to seal them up, keep them small, and make sure they function just as well in the real world as in the glovebox."

“Tested independently, the 3D anode of an Si post array exhibits a reversible lithium capacity of 14mAh cm−2 over 20 cycles, the SU-8 electrolyte gives lithium ionic conductivity of 2.8 × 10−7 S cm−1, and the vacuum-infiltrated 3D cathode delivers 4.4mAh cm−2. Full 3D batteries based on a 3 mm × 3 mm platform and just 6μL of total volume are, to the best of our knowledge, the first 3D batteries to operate with a conformal solid electrolyte.

“The full batteries deliver discharge capacities up to 1.8mAh cm−2 (5.2mWh cm−2), more than twice the highest values reported for thin-film batteries. The batteries operate at currents up to 0.66 mA cm−2 and survived 100 cycles at 0.5mAh cm−2 (1.6mWh cm−2). These results are among the highest energy densities reported in the literature.

This work was supported by the Office of Naval Research.