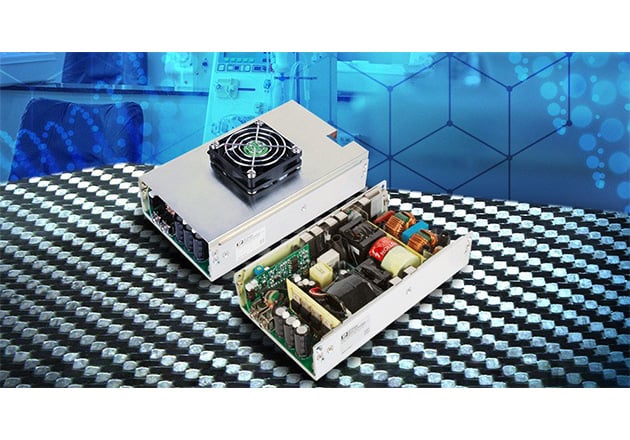 What are Class II Power Supplies and BF Class Insulation?

As described by Digikey, Body Floating (BF) Class Insulation is relevant to devices that make direct electrical contact with a patient, but not to their hearts. These types of units do not connect to external ground and are thus considered to be “floating.”

The governing standards are defined by IEC 60601-1. They are both complex and specific, and OEMs would do well to give this standard their upmost consideration. There are strict requirements both for current leakage and for creepage distances.

Basic requirements include input to output isolation of 4000 VAC or better. Additionally, there must be at least 1500 VAC isolation for both input to ground and output to ground.

The Top Fan Cover Version, depicted in the top left corner of the illustration, includes a built-in, low noise variable speed cooling fan. These series members will provide 450 to 500 watts of output power

The U-Channel Version, depicted on the illustration’s lower right, will also offer 450 to 500 watts output when provided with external forced air cooling. With convection cooling, output is 250 watts.

Specific Safety and EMI Concerns and Precautions for the PBL500 series

Because device served by medical power supplies make direct and intimate contact with human being, safety is the number one concern

Typical efficiency of the series is 90%. This is specified at full output load and with 230 VAC input.

The maximum switching frequency is 300 kHz.

All members of the series offer:

Additionally, the U Channel devices feature a 12 volt, 0.3 amp output aimed at powering the cooling fan.

Members of the series are compliant with:

Conducted and radiated emissions are both class B.