Energy harvesting is the technology that derives small amounts of energy directly from the environment and converts it into electric power. Efficient power management is a key component for energy harvesting.

One of the biggest issues is that consumption from the power management function is greater than the energy supply from the environment. Therefore, there are so many energy sources that have never been used in our environment.

sensingnet Inc. has been developing Regenerative Sensing System using the AP4470 for sustainable power sources. Microbial fuel cells (MFC) utilize the electric power that is generated by microorganisms present in soil, wastewater, and other environments.

This is a significant technology that can secure a permanent supply of power from almost any place that microbial activity exists. 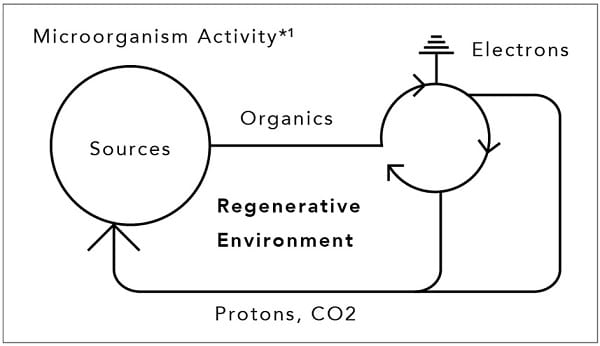 *1 An anode and a cathode is installed in order to collect the electrical energy that is generated by geo bacteria living both in the ground and in water. (source, sensingnet, Inc.)

By employing a booster chip such as the AP4470 that independently augments the micro-electricity that is produced by these microorganisms, the MFC system produces continuous power resources that support such edge computing as sensing and communication.

Features of the AP4470 include:

The AP4470 requires only 0.2V input to start boosting without the need for an external transformer. This helps minimize energy harvesting materials size and simplify the structure. The AP4470 enables new ways to provide power to drive sensors, displays and wireless modules.

The AP4470 converts dc inputs up to 3.55V and monitors external storage. When the external storage's voltage reaches 3.3V, the AP4470 automatically starts supplying to target devices. If the voltage drops down to 2.6V, the AK4470 stops supplying voltage and current via on-chip switch function.