Mitsubishi Electric Corporation announced the launch of three new Large DIPIPM+TM transfer-mold intelligent power modules featuring loading-converter circuits that realize simpler and more compact designs for use in air-conditioner and industrial inverters. Of special note, one of the new modules achieves a world's first high-density output of 100A/1200V in its transfer-mold package.

Sales of the new DIPIPM+ series will begin on May 29. The modules were first put on public display this week at Power Conversion Intelligent Motion (PCIM) Europe 2019 in Nuremberg, Germany from May 7 to 9

Mitsubishi Electric has been contributing to the miniaturization and energy-efficiency of inverter systems since commercializing its first DIPIPMTM series in 1997. The more compact and simpler-design DIPIPM+ series, which places the inverter and converter into one package, was introduced in 2015. In response to increasing demands for high-power compressors in package air conditioners, the company is now adding models of up to 100A/1200V for package (heat & cooling) air conditioners in the 56kW class. 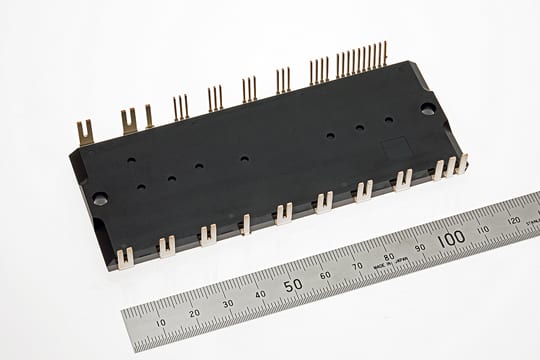