The company’s latest three-path diode power sensors feature a dynamic range of from -70 dBm to 20 dBm.

The R&S NRP67S and R&S NRP67SN power sensors can take 10,000 measurements per second over a range of 50 MHz to 67 GHz, with what Rohde & Schwarz (R&S) describes as accuracy not previously possible over this dynamic range or at such high frequency. 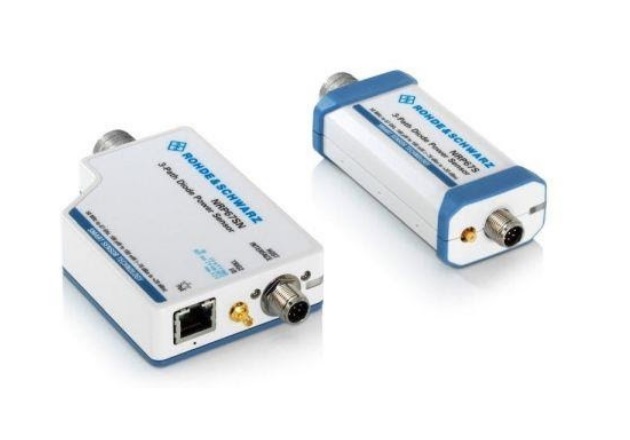 Image courtesy of Rohde and Schwartz

Put in its simplest terms, diodes react to AC power differently over different power ranges. Measurements are most simply and accurately made over power levels contained within what is described as the “square law region”. The signal to be measured can be modified and presented to each of the three diodes in an alternative manner, in three different “paths”. Within each of the paths, the detector can operate within the square-law region, with more reliable results made possible.

For the new NPR67S and the NPR67S(N), the three power paths are:

The Need for High-Frequency Measurement

The world of electronics is expanding into ever-higher frequency realms. The latest supported WiFi and WirelessHD (high-frequency video transmission) standards operate at frequencies north of 57 GHz. And indeed, most other wireless communication protocols are following suit. Because of this undeniable trend, R&S envisions the new devices as “a near-universal tool for wireless infrastructure power measurements.”

The two new devices and all members of the extended NRPxxS power sensor family, with their portable format, will serve for a range of local or remote applications in installation, monitoring and maintenance.

The user can choose to mate them to an R&S NRX power meter. They also work well with certain Rohde & Schwarz signal generators and analyzers. Another possibility would be a PC that has the R&S NRPV virtual power meter software installed.

Additionally, the NRP67SN model includes an Ethernet interface, facilitating remote LAN-based operation. The ubiquitous USBTMC protocol is supported, allowing easy integration into a variety of test systems. When referring to both models, the term NRP67S(N) is used in R&S literature.

These figures are for temperatures ranging from +20 to +25 ℃.