The non-isolated IBC offers over 98% efficiency at half load and can deliver a continuous 860 watts of output power. 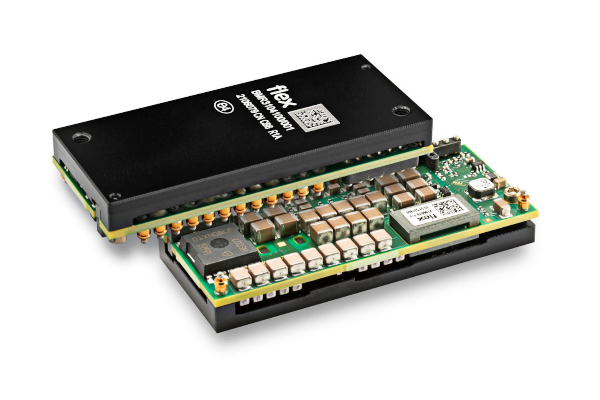 Data centers, as well as other high-performance computing (HPC) applications, are moving from 12V to 48V power to reduce I2R power losses. This creates a need to efficiently convert 48V down to 12V, to enable an easy migration path for legacy 12V systems that otherwise still suit their purpose.

To meet the need, Flex’s BMR310 employs Infineon’s zero voltage switching switched-capacitor converter (ZSC) technology. Through the use of capacitive energy transfer with soft switching of the power MOSFETs, the unit can supply 860W on a continuous basis and up to 1060W peak (1s) in a power-dense (2.3 x 0.98 x 0.41 inch)  package.

Switched charged capacitor transfer technology is described in a short Infineon video and is compared to standard switched capacitor technology. The latter depends on the resonant frequency of the LC tanks being the same as the converter’s switching frequency, which requires expensive precision capacitors.

ZVS’ switched charged capacitor transfer technology avoids this issue through the utilization of what is described as a ZVS inductor. This inductor serves to discharge the output capacitance of the power MOSFET during dead time. Then, upon switching on, there is no voltage and thus no loss. In this manner, the switching frequency is higher than the resonant frequency, rendering the tolerance of the tank capacitor irrelevant.

As described by Mikael Appelberg as Chief Technology Officer at Flex Power Modules “Infineon’s ZSC topology is a meaningful change in power distribution and enables us to deliver the high efficiency and power density that’s needed for data centers, today and tomorrow.”

Features for the BMR310

Protections are included for:

For higher power, paralleling of multiple BMR310’s is supported through the employment of passive droop load sharing (DLS).

To enable digital control, the unit features a PMBus interface.

The unit is supported by Flex’s Flex Power Designer tool.

Specifications for the BMR310

Maximum output current is 65A.

Input turn on and turn of voltages (typ) are: