Titanium efficiency standards are outlined by CLEAResult. The TET3200-12-069RA is spec'd in the datasheet as having achieved the “80 PLUS” Titanium standard. What that means is that a power supply such as this one achieves:

In order to reduce component stress and to increase reliability, the unit employs soft-switching resonant techniques in conjunction with synchronous rectification. Active OR-ing on the output not only ensures that there will be no reverse load current, but it also allows the power supply to be hot-swapped. It can also be deployed in parallel for increased power and it suits the unit for deployment in those redundant power supply situations now typical in modern usage. 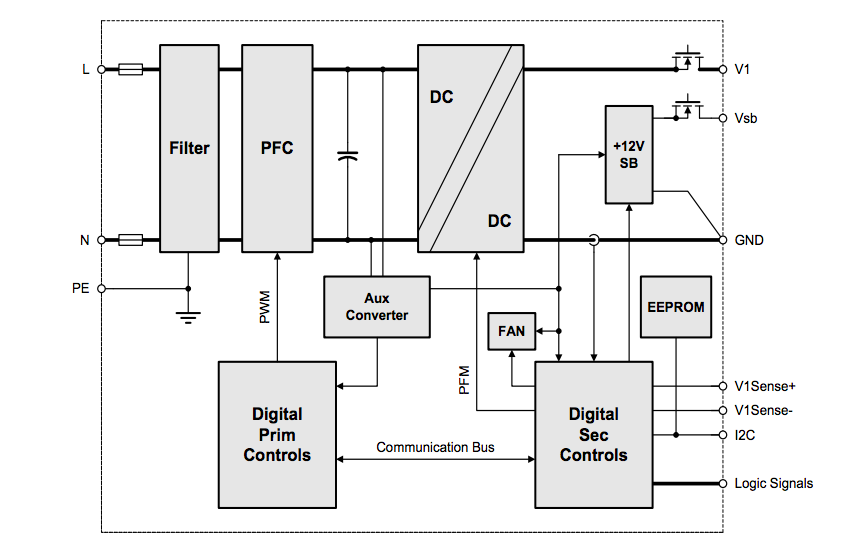 The TET3200-12-069RA  exhibits a low input capacitance of 4.3μF. Thus, when power from the mains is first applied to the unit, a low and short peak current results. The internal bulk capacitor will be charged through an NTC, further limiting the inrush current.

The other member of the series, not as yet in production, is the TET3200-12-069NA. A primary difference is that this device is cooled by reverse airflow, rather than the front-to-back airflow as is the case for the TET3200-12-069RA. It should be noted that the power supply is designed for horizontal operation.

The TET3200-12-069RA communications via I2C. The power management bus protocol allowing the device to be monitored and controlled in real-time. Voltage, current, power, and temperature are always available. Protections against overtemperature, overcurrent, and overvoltage are included as standard

The  I2C bus supports the bootloader. This allows field updates to the digital signal processor’s (DSP) firmware. The power supply’s cooling fan is also controlled by the DSP controller. The fan’s speed is automatically adjusted in accordance with the load's power demand and the unit’s temperature. Fan speed can be overridden through commands issued through the I2C buses.

As is the case for any power supply, there are far too many important safety and regulatory conditions for them to all be listed here. Extensive details are supplied in the datasheet.