To allay any unfounded concerns of electric vehicle operators, here is an examination of how commonplace EV fires are versus gas-fueled vehicle blazes, and what factors cause EVs to go up in smoke.

The wrath of Hurricane Ian pummeled the western coast of Florida in late September, taking 118 lives in that state and compiling a tally of destruction amounting to more than $50 billion in damages.

Widespread flooding from Ian in Florida also contributed to at least 11 electric vehicle fires. On the heels of California, Florida ranks second in the nation in its total number of EVs. 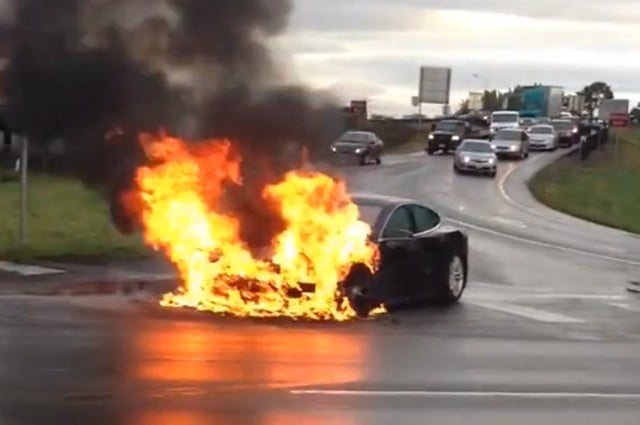 A Tesla Model S is on fire after a roadway collision. Image used courtesy of Flickr

All 11 confirmed fire incidents reportedly happened because of either EV battery packs short-circuiting out from being immersed in saltwater or batteries being damaged during the hurricane. Mercifully, these fires didn’t trigger any electrocutions or deaths, though one EV fire on Sanibel Island destroyed the home the car had been parked at, as well as the dwelling next door.

These tragic incidents, though directly attributed to flooding from a powerful storm, still underscore the dubious reputation EVs have attained. Scary misconceptions abound about EVs bursting into flames seemingly without cause and EV owners sleeping with one eye open as their green mode of transport sits quietly parked—for the moment.

To dispel some of the trepidation, perhaps some statistics can supply reassurance. First, despite their surging popularity, the sale of EVs amounted to less than 2 percent of all U.S. vehicle sales in 2020. According to recent figures from the Bureau of Transportation Statistics and the National Transportation Safety Board (NTSB), per 100,000 vehicles sold, hybrid vehicles caught fire the most, with 3,474.5 incidents. Internal combustion engine (ICE) vehicles came in second with 1,529.9, and EVs trailed the pack with only 25.1 fires.

The sheer novelty of EVs might be detrimental to their reputation. When an EV is blazing, it makes the news and lends a sensational quality to even an isolated incident.

When EV fires do erupt, emergency personnel are often hard-pressed to put out such fires, which burn hotter and longer than ICE fires and can flare up again without warning. The National Fire Protection Association mentions a crash-related EV fire in Texas that took more than 30,000 gallons of water to extinguish. Since fire engines generally carry about 500 gallons of water, EV fires that happen away from municipal water supplies (hydrants) can drain resources quickly.

Li-ion Batteries Are the Bugaboo in Combatting EV Blazes

What makes these fires so intense and challenging to confront? The culprit: lithium-ion (Li-ion) batteries. As in the Hurricane Ian scenario, water from a flood can intrude into the battery, forming a short circuit, which makes battery cells emit energy and heat. This can trigger “thermal runaway,” with heat spreading from cell to cell and burning in a chain reaction process. “Shorting out” can also happen from contaminants or salt from invasive water, particularly after the water has drained out of the battery. To exacerbate the situation, as with any size Li-ion battery, explosions are an alarming possibility.

In most EVs, the battery is contained in a watertight, fireproof box. Though this reduces the likelihood of batteries bursting into flames, when a fire actually develops, dousing it can be extremely challenging. Fire departments have even had to jack up EVs to access the burning battery underneath.

Pouring on lots of water so far is the usual method to put out EV fires. A mixture of foam concentrate and water can be applied, though it only retards the fire somewhat and does not put it out. Since they don’t need oxygen to burn, Li-ion batteries will keep burning as part of the battery reaction. 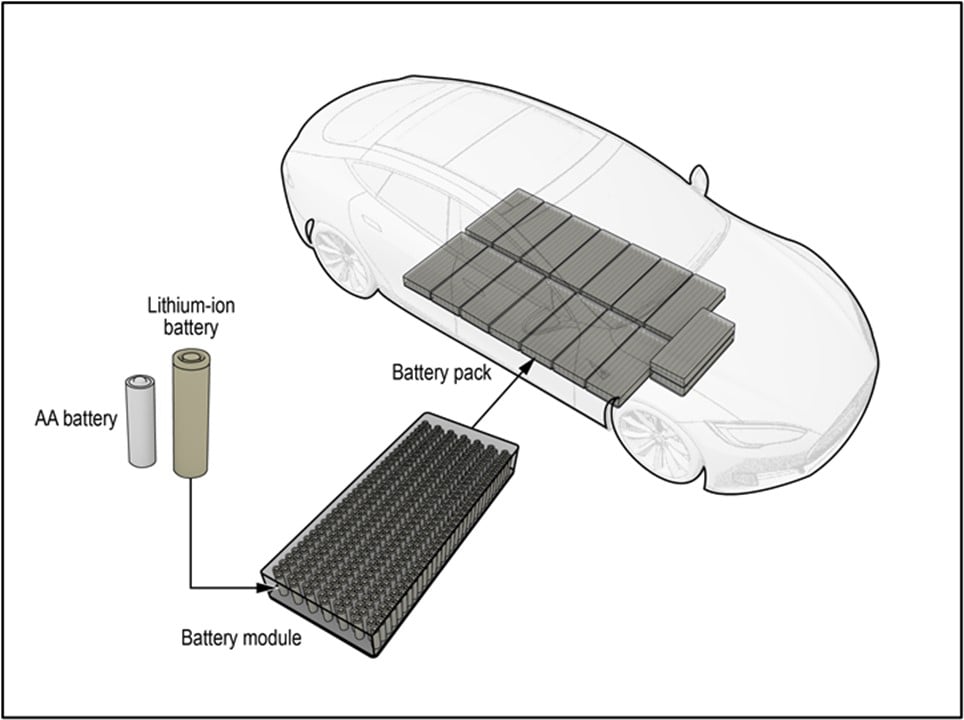 Illustration of a Li-ion battery arrangement, including a size comparison between a typical AA battery and one of the Li-ion batteries in the module. Image used courtesy of Christy Spangler/NTSB

The NTSB cites another example of the burning persistence of Li-ion batteries. In 2017,  after an EV crashed into a house, firefighters were forced to waste thousands of gallons of water to subdue the blaze. Aiming the water flow at the top of the vehicle proved futile since it really should have been directed underneath the EV to penetrate the battery cells.

This episode lays bare the inadequacy of training and resources that firefighters and emergency responders must grapple with when attacking EV fires. Response guidelines are far different for EVs than for ICE vehicles, and proper training programs must be in place. Firetrucks and equipment also are insufficient for the task of extinguishing EVs.

Our focus so far has been on fires caused by some type of damage to an EV battery, be it from a collision or water entry. But fires also can happen during the charging process.

Battery cells that have been found to have a manufacturing defect heighten the risk of fires and explosions, especially during charging.

Overcharging a battery is an invitation to disaster because Li-ion batteries are not designed to accommodate too much charge. Even extreme temperatures can trigger EV blazes during charging. The acceptable ambient temperature range when charging: 41 to 113 degrees F (5 to 45 degrees C). Never charge a Li-ion battery when the mercury is below freezing levels due to the reduced diffusion rates on the battery anode.

After digesting these unappealing facts, perhaps your appetite for EVs has diminished. It shouldn’t have.

Consider the safety factor, with the number of fire incidents for EVs far lower than that of their ICE or hybrid counterparts. Technology has a consistent way of adapting to adverse circumstances, so as EVs become a more prominent part of the vehicle landscape, improvements in manufacturing, emergency response, and safety standards undoubtedly will right the sometimes-listing EV vessel.