The International Trade Fair for Mobility 4.0 “eMove360° Europe 2018”, which ended on 18 October in Munich, is continuing its growth. Around 260 exhibitors

The International Trade Fair for Mobility 4.0 “eMove360° Europe 2018”, which ended on 18 October in Munich, is continuing its growth. Around 260 exhibitors from 25 countries – the international share has risen 44 percent once again to a new record level – presented their innovations and solutions for the mobility of the future during the fair, occupying more than 20 percent more space than last year.

According to MunichExpo, the three-day eMove360° Europe 2018 is the world‘s leading technology trade fair for sustainable mobility solutions, including car-sharing and intermodal mobility. With its various platforms, eMove360° sees itself as the umbrella brand for New Mobility and as an international marketplace that combines supply and demand on a global level. The thematic spectrum ranges from vehicles and drives systems through urban and mobile design, material and process solutions to automated driving and electronics as well as connectivity and infotainment.

The trade fair‘s target group includes developers, designers and IT experts from major OEM and Tier 1 suppliers as well as buyers and users, such as fleet managers, decision-makers in cities, municipalities, tourism regions, and service providers.

Trade Fair Director Robert Metzger was correspondingly satisfied: "I am very pleased that we have continued our growth and this year experienced a considerable increase in visitor numbers by 30 percent. In addition, many exhibitors expanded their stand space after booking. This shows that our exhibitors are bringing innovations to the market at a high rate that they want to show on our platform, which brings together supply and demand worldwide".

A Breakdown of the Attendees

Approximately 30 percent of international visitors and 40 percent of the around 300 exhibitors with company headquarters outside of Germany underscore eMove360°‘s leading international role in the mobility of the future. Visitor target groups of the fair are developers, designers and IT experts of the major OEM and Tier1 suppliers, as well as buyers and users, such as fleet managers, decision-makers in cities, municipalities, hotels & tourism and service providers.

Around 30 percent of the approximately 11,000 visitors came from outside Germany. In addition to the high number, the exhibitors predominantly praised the quality of the discussions: more than 90 percent of the visitors were experts who were specifically looking for products and solutions for their requirements and approached the exhibitors with concrete questions and buying interest. "The trade fair has significantly expanded its status as the world‘s leading trade fair for electromobility. I am very pleased that we are so successful with our concept of focusing on electric mobility and autonomous driving as our core topics and not as an appendage to other topics such as renewable energies,“ Metzger sums up. 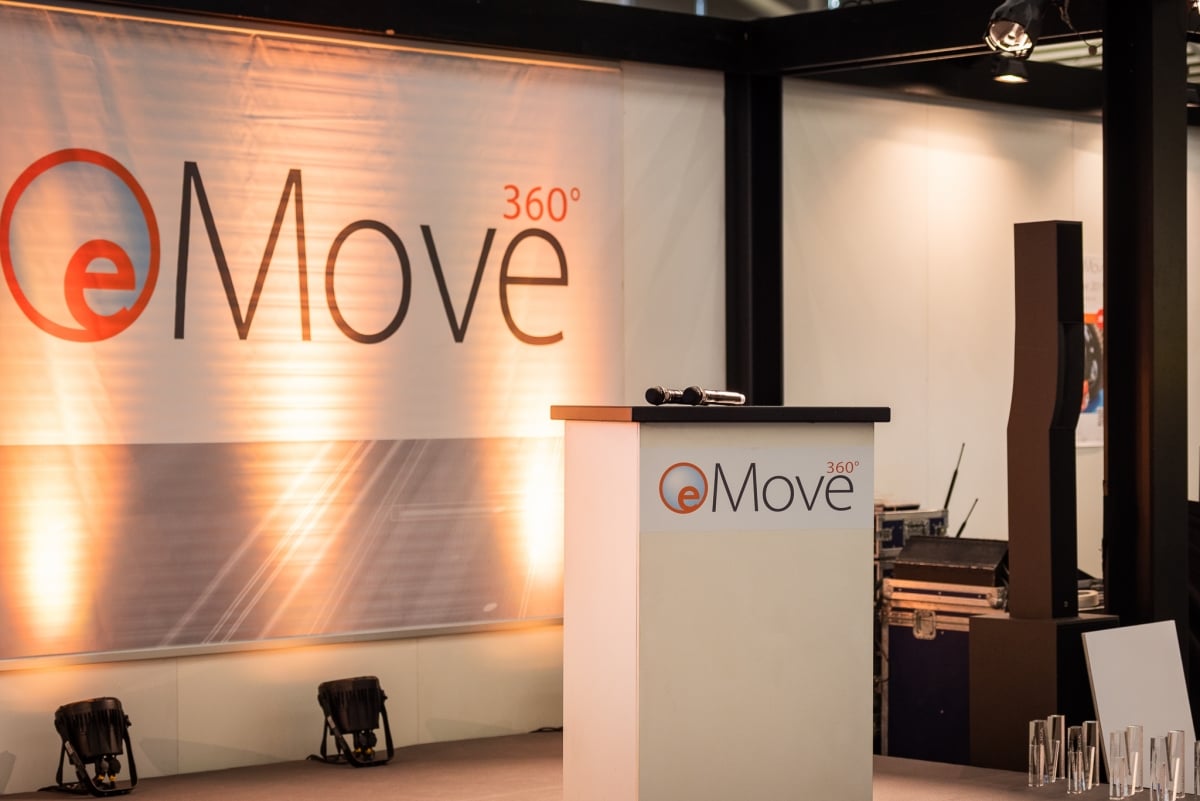 Professional Exchange on All Platforms

The trade fair forum was a real center and meeting place for this year’s event with exciting lectures and discussions as well as several press events and two lunch events with partners from the Netherlands and the government of Catalonia.

The new concept of the parallel eMove360° Conferences on four different aspects of New Mobility – Battery, Fuel Cell, Electric & Autonomous Mobility, and Charging & Energy – proved to be a complete success and, like the trade fair, attracted significantly more visitors than last year. Almost 300 international participants classified the quality of the presentations as consistently very high, the professional exchange both in the question rounds after the presentations and in the personal discussion between participants and speakers was a great enrichment of the conferences.

Renowned companies such as Daimler, Continental, Brose, Hubject, Tritium or Juice Technology applied for the eMove360° Award for Electric Mobility & Autonomous and the 16th Materialica Design + Technology Award, as did young companies.

The winners of the second edition of the eMove360 ° Award for Electromobility and Autonomous Driving were announced in the festive atmosphere of the Munich Glyptotheque. The award was presented in the categories Mobility Concepts & Software, Charging & Energy, Battery, Powertrain, Automated Driving & Electronics and Electric Vehicle.

As in the previous year, several winners were named in the category Electric Vehicle: SUNCAR received the coveted trophy for its e-excavator fleet, as well as RYTLE for its MovR, a 3-wheeler with integrated logistics solution and MW Motors for its LUKA electric retrocar. From a technical point of view, the two winners in the Battery and Powertrain categories are real highlights: The electric motor with integrated capcooltech® technology by dynamic E flow is – due to its direct cooling which is unique in the world – more efficient, lighter, more robust and cheaper than the (still) common market standard. LION Smart was awarded the prize for its LIGHT Battery concept, which focuses on a lightweight, modular design of the batteries as well as on the communication of the individual cell modules with the battery management system via infrared light.

Blickfeld has also realized an enormous leap in technology with its new LiDAR scanner for autonomous vehicles. With its system which reduces the costs by a factor of 100 compared to current systems, Blickfeld makes this technology suitable for the mass market.

Hubject, the winner of the category Mobility Concepts & Services, was awarded the prize for the first ISO15118 ecosystem, which enables communication between the charging station and the vehicle, eliminating the inconvenient identification with different charging cards or smartphone apps.

For the first time ever, wallbe’s charging station allows precise calculation of the electricity taken – an important step, especially for public charging stations, to make charging as simple and transparent as the refueling of a fossil vehicle that has been learned over decades.

More than a dozen companies and organizations, ranging from Tier 1 automotive suppliers to specialized small and medium-sized companies, in the categories Material, Surface & Technology, Product and CO2 Efficiency received the internationally recognized award. Four submissions received the “Best Of” award as winners of their category. The Student Award went to Youyang Song of the Weißensee Academy of Art Berlin for a process for the recovery of textiles from biological waste inspired by the molecular kitchen and Nadia Narges Rezaei of the University of Arts in Berlin for a sports bra, which is produced individually on the basis of a 3D body scan.

In the Materials category, Chemours has been awarded the Best Of Award for a new cable technology specifically designed for real-time data processing in autonomous vehicles or IoT applications. MDT Sonnenschutzsysteme received the award in the Product category for a textile solar carport.

Covestro won the Best Of Award in the category CO2 Efficiency for a sustainable paint curing agent, Continental in the Surface & Technology category for its Morphing Controls technology, which allows completely new design and operating concepts to be implemented in the interior of future vehicle generations.

Roland R. Ackermann is an engineering graduate and a technology journalist since 1957. Editor in chief, publication manager, publishing manager of monthly and weekly papers dedicated to electronics, engineering and manufacturing/automation. In addition, between 1970 and approximately 1985 he broadcast the weekly radio program "Der technische Report" for the 2nd channel of the Bavarian state radio station. Freelance journalist since August 1996: he published Elektronik Journal, was editor in chief of Electronik Embedded Systeme and verlagsweltMAGAZIN, and also wrote numerous articles in German and English publications and newspapers (incl. SZ) on technological trends and special topics such as electronics, IT, automotive, automation and bio-medicine technology. He was a regular column writer in "E&E Faszination Elektronik" and a correspondent for "Bodo's Power Systems". Regular translation work from English to German with the focus on electronics. Holds talks at international venues, moderator of panel discussions, event organizer.