Advances in component technology, together with the emergence of novel new architectures, hold the key to taking wireless charging beyond phone chargers and into applications such as appliances and electric vehicles.

From Tesla to Smartphones and Standards

The concept of transferring electricity without cables is not new. It was first demonstrated in the nineteenth century, most famously by Nikola Tesla with his experiments in pulsed wireless energy. More recently, wireless power transfer has been successfully applied to the charging of mobile phones and other small, portable devices.

Now, analysts agree that the wireless charging market has the potential for significant growth, driven both by increased deployment in consumer applications and demand from new, higher power applications. According to a report from industry analysts Research and Markets, the global wireless charging market will increase annually approximately 22% between 2020 and 2027. An increasing contribution to this growth is expected to come from higher power applications including kitchen appliances and electric vehicles (EVs).

In line with the adoption of wireless charging, standards have emerged to ensure interoperability between charging sources and devices. Today the most prominent wireless standard is Qi (pronounced ‘chi’), developed by the Wireless Power Consortium (WPC)2, an open, collaborative standards development group with more than 400 members. Qi currently defines power delivery of up to 15 W and supports charging distances of up to 40 mm. 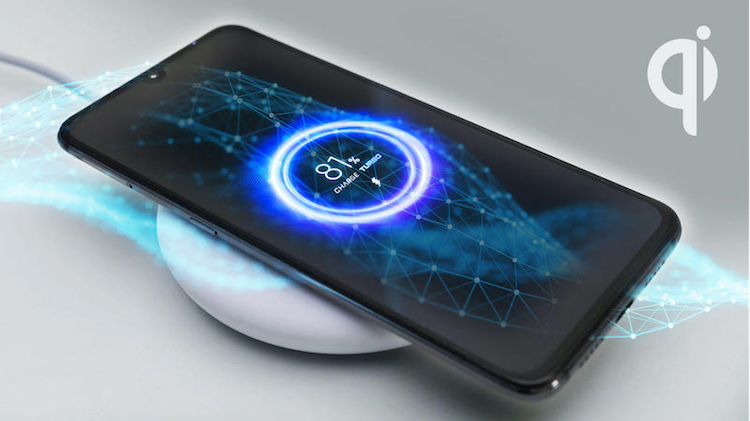 A future extension to 60 W will expand wireless charging to larger devices such as laptops and the WPC is already working on new wireless power transfer standards including:

To address the market potential and meet the requirements of emerging standards, it is vital that existing limitations to operational efficiency are overcome.

Power Delivery Techniques and the Drive for Efficiency

There are a number of techniques for delivering wireless power transfer (WPT), which is also known as wireless energy transmission (WET). WPT covers both far-field and near-field applications. Far-field designs use a radiative approach in which the power is transmitted by radio frequency (microwave) or light (lasers) using a technique known as power beaming.

New and emerging applications for wirelessly charging appliances, industrial equipment, and electric vehicles are most likely to be based on near-field designs.

The vast majority of today’s near-field WPT techniques feature inductive coupling in which power is transferred between coils of a transformer using a magnetic field. In most cases, resonant inductive coupling is used, in which a resonant circuit in the transmitter and a resonant circuit in the receiver are tuned to resonate with the same frequency. Resonant inductive circuits deliver higher efficiencies over wider distances than non-resonant designs.

An alternative to inductive coupling is capacitive coupling. In this case, a capacitance between two electrodes provides the mechanism for power transfer. An AC voltage on the transmitter induces an alternating potential at the receiver, allowing delivery of AC current to the load.

Irrespective of the route chosen, efficiency - and, in particular, matching or exceeding the efficiencies of wired alternatives - is one of the biggest challenges facing designers of wireless power systems. With high-quality wired adapters, for example, users can reasonably expect efficiency levels between a wall outlet and the device being charged in excess of 85% or even above 90%. Historically, however, wireless charging solutions have failed to reach these levels. If this is to change, designers will need to re-think their approach.

There are a number of factors that influence the overall efficiency of a wireless charger. These include the topology, the implementation of the coil and other magnetics, and the number of stages in series between the wall outlet and the device being charged.

The topology represents the core of any power converter—including wireless power transmitters—since it determines the mode of operation, performance, and ability to meet product design specifications. For optimum efficiency, the topology should be able to operate with zero voltage switching (ZVS) when turning power MOSFETs on and off.

ZVS refers to the point at which the voltage between the drain and source of the power transistor reaches zero prior to a switching event. In an ideal world, all switching would happen at zero volts, but in reality, this is not the case. When the voltage between the drain and the source is not zero, as illustrated in Figure 1, a current is generated, and that current causes a power loss that reduces system efficiency.

Many of today’s topologies are unable to achieve ZVS, and even those that do only manage it under medium- to full-load conditions. Indeed, until recently, no conventional or textbook topology had ever been able to deliver ZVS at very light-load conditions, meaning that the light-load efficiency of converters is severely compromised. As many applications spend a lot of time operating under light loads, the impact of this efficiency reduction in real-life operation can be significant.

What’s more, ZVS does not just impact efficiency. The further a topology operates away from perfect ZVS characteristics, the worse a converter’s EMI performance will be. This, in turn, has an impact on the number and the cost of additional components required for filtering. Furthermore, because losses manifest themselves as heat, there is an additional implication in terms of additional components (and cost) for effective thermal management and overall converter reliability.

As a result, developing topologies capable of ZVS operation across the widest possible range of load conditions has become a priority for power supply designers.

Alongside the power MOSFET, magnetic components including inductors and transformers are fundamental elements of power conversion designs. A conventional wireless charging design contains magnetics in the:

The magnetics implementation presents a complex, multi-variable design challenge with plenty of opportunities to increase system losses. This includes the correct sizing and selection of the magnetic components for correct functioning of the circuit.

Number of Stages in Series

In general, the more stages that a design has, then the less efficient it is likely to be.

Today’s existing Qi-based chargers, for example, generally have three key functional blocks made up of five distinct stages as shown in Figure 2.

Comprising a mains rectifier and a voltage regulator, the first functional block converts the AC input voltage from the mains supply to the appropriate DC voltage used within the charger. The second block is the transmitter coil driver stage. The third block is the wireless receiver that incorporates the receiver coil rectifier stage and circuitry to regulate the output voltage.

Losses from these functional blocks and the connections between them all contribute to reductions in end-to-end efficiency. In addition, this type of architecture can only deliver ZVS when operating at full load. Outside of full load conditions or when conditions are not ideal, efficiency can fall away rapidly.

New architectures are emerging that bring together the benefits of ZVS across wide load ranges, novel approaches to magnetics design, and innovative techniques for reducing the total number of stages.

An example of this type of new architecture is shown in the two-stage ZVS wireless power supply of Figure 3.

In this design, known as E2WATT, the total number of functional blocks required to implement a complete, end-to-end charger system is only two – a transmitter and a receiver. The transmitter is supplied directly from the AC mains, removing the need for an external AC/DC adapter. The receiver stage acts both as a rectifier and a non-dissipative output regulator.

The circuit operates by charging and discharging the transmitting coil self-inductance with a half-bridge while transferring energy to the secondary coil via magnetic coupling. Thus, it takes advantage of the typical low coupling of wireless applications (i.e. much lower than an AC/DC wired flyback converter) in order to exploit the leakage inductance to achieve a ZVS condition.

When the low-side MOSFET is turned off, the energy stored in the leakage inductance of the transmitting coil flows through the high-side FET body diode and charges an auxiliary primary side capacitor, up to the primary output voltage. Then, the high-side FET is turned on with zero drain-source voltage and is kept on after the current in the primary coil is zero, allowing a reverse small current to flow from the auxiliary capacitor to the coil. This is used after the turn-off of the high-side FET to discharge the parasitic capacitance of every FET allowing for ZVS operations, increasing overall efficiency in every load condition. 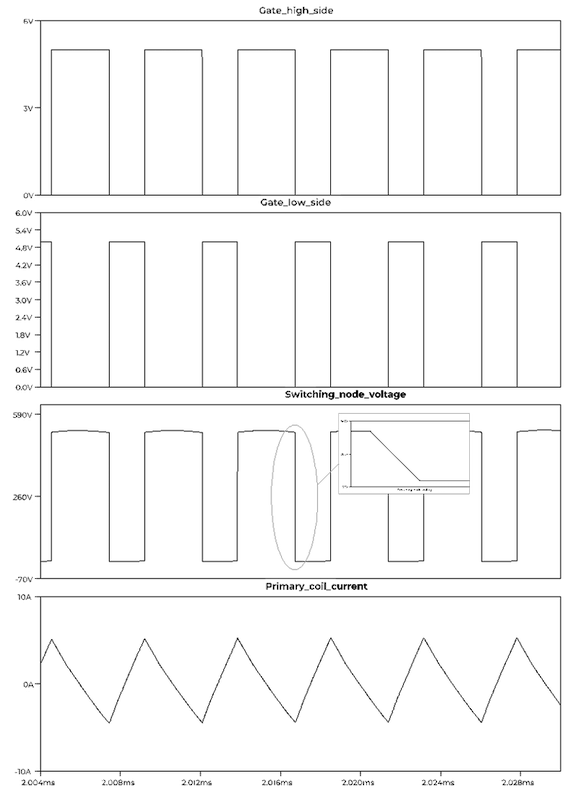 By reducing the number of stages from five to two and, thus, minimizing the number of components and interconnects, the end-to-end losses of the new design are much lower than those of more conventional architectures. At the same time, the non-resonant transmitter features ZVS operation. The single-stage receiver commutes always in ZVS conditions to virtually eliminate switching losses from light loads to full load. In tests, this architecture has demonstrated peak efficiencies between 95.2% and 96.2% at output powers ranging from 85W to 300W.

Despite a history that dates back to the early days of the electrical revolution with pioneers such as Nicola Tesla, and even though we have become used to cable-free charging of smaller devices, wireless power is really still in its infancy. Advances in component technology and the emergence of novel new architectures hold the key to opening up the potential of taking wireless charging beyond phone chargers and into applications such as appliances and electric vehicles. These solutions not only address the critical requirement to increase efficiency but provide the ability to scale to significantly higher powers, extend charging distances from a few centimeters to tens of centimeters, support the simultaneous charging of multiple devices and address the challenge of positional freedom so as to eliminate the need to place an appliance (or park a vehicle) in a certain way. Many will also address OEM demands for solutions that give much greater design freedom in the choice of materials and aesthetics – all without impacting charging performance.