There are test instruments that can sense voltages and currents without having to make electrical contact with the circuit under test. Several versions are on the market.

A commercially made unit that senses voltage and does not rely on lamps or vibrating solenoids is a device sensitive to the electric fields produced by the circuit. It is the basis of the finder used to locate live conductors buried in walls up to a depth of 2.5 cm. Most units give both audible and visual signals.

Current testers are marketed under various names, most of which are trade-related. They are called tong testers, clamp meters, clip-on testers, link test meters, and so on.

Clamp meters are generally used to measure currents without having to interrupt the circuit being tested. Most meters have accuracies within 1 percent of full-scale deflection and on frequencies ranging from direct current (f = 0) to about 1kHz.

Originally there were only two types. One worked on the repulsion principle of the moving-iron meter, while the other used a transformer combined with a switch to select the desired current ranges. These can still be obtained, but many other versions are now available.

The operating principle was that of the moving-iron meter. A variety of current ranges was catered for with plug-in modules. On being placed around the conductor to be measured, the magnetic field created by the current set up repulsion between the meter elements and caused the moving section with a pointer attached to rotate. They were capable of use on both AC and DC

Different current ranges were catered for by using a transformer with tappings connected to a range switch. The transformer prevented it from being used on DC. The basic principle is shown in Figure 1.

The indicating meter could be a DC-operated meter by connecting a rectifying unit between the transformer output and the meter movement. With a DC meter, the scale then becomes linear. With a moving-iron meter, the scale was non-linear.

In use, the jaws of the instrument were opened with a lever and then placed around the chosen conductor. The jaws were then allowed to close. The magnetic field around the conductor entered the low permeability path of the iron, and the meter movement responded according to the strength of that magnetic field.

Current models can be switched to indicate peak, RMS, and average values for many different waveforms, as well as indicating DC values. Some models will also indicate circuit voltage by measuring the strength of the electric field around the conductor.

The number of available functions on anyone meter has a considerable bearing on the price of the instrument. The range of options is impressive. The trend is for instruments to have digital readouts and auto-ranging facilities.

Two testers are illustrated in Figure 2. The finger-operated trigger can be seen in both. In Figure 2(a), a digital readout model is illustrated. This model is auto-ranging and will read currents in the range 2 A to 2000 A AC. It can also be used to measure voltages, both AC and DC, and resistance values of 40 kΩ with a pair of plug-in test leads. 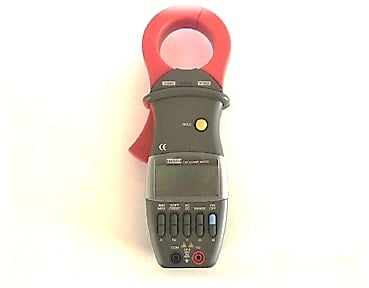 The unit in Figure 2(b) has an analog readout and a pointer which has to be read against a scale. Varying ranges are provided by a series of scales, which are rolled around in a window. It is an AC-only instrument and reads up to a maximum of 500 A. To read voltages or resistance values, test leads are plugged into the base of the unit. A replaceable battery is enclosed, and the meter is protected by a fast-acting fuse. 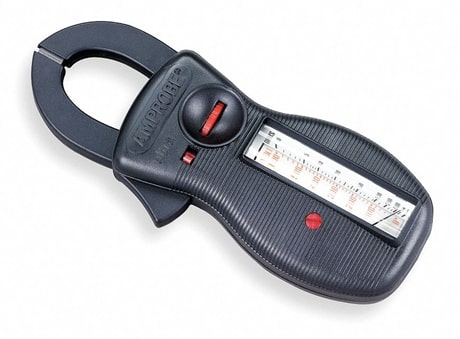 Other clamp-on meters use a Hall-effect device to detect the presence and quantity of current flowing. The phenomenon was first recorded in 1879, but its use has only become practical with the development of integrated-circuit modules.

When a current is passed through the opposite edges of a thin piece of foil, a magnetic field applied at right angles to the current will produce a voltage across the remaining two edges. This voltage is proportional to the current flow through the piece of foil. By maintaining a constant current flow, the voltage produced is directly proportional to the strength of the magnetic field.

When the magnetic field is the result of current flowing through a conductor, the device becomes, in effect, an ammeter. Electronic circuitry has to be employed to maintain a constant current flow and to measure and amplify the voltage produced. A separate power supply (usually batteries) also has to be used.

The method is an excellent and accurate one, but the additional components tend to make a meter of this type expensive. Available models can be obtained in current ranges from milliamps to 2000 A. Their sensitivity to low values of current and their accuracy make them ideal for measuring leakage currents.