This article discusses the thermal performance of the chipscale package and compare with the state-of-the-art power MOSFET packaging available today.

Semiconductor packaging has been saddled with four key complaints since the advent of the solid-state transistor; (1) packages have too much resistance, (2) they have too much inductance, (3) they take up too much space, and (4) they have poor thermal properties that limit heat extraction.

In 2010 enhancement-mode gallium nitride power transistors were introduced without a surrounding plastic package. The unique characteristics of the lateral GaN-on-silicon transistors enable the active devices to be protected from the normal environmental abuses without a cumbersome molded plastic package. These chipscale packages, with a Land Grid Array (LGA) format, eliminate the parasitic inductance and resistance of the semiconductor package as well as the space occupied a conventional package. In this paper, we explore the fourth key complaint, thermal performance of the chipscale package, and we compare this performance with the state-of-the-art power MOSFET packaging available today.

To set the stage for the thermal analysis, let us first look at the physical construction of the chipscale package. In figure 1 is the EPC2021 eGaN FET [1]. The solder bars make connection between the PCB and the gate, source and drain of the transistor. The top row of bars is separated from the bottom row in order to make ample room for vias on the PCB that can pull heat from the center of the transistor to the back of the PCB.

Figure 1: Enhancement mode gallium nitride power transistor (EPC2021 [1]) in a chipscale package. Shown are the solder bars that are mounted facedown on a PCB.

The solder bars mate with traces on a printed circuit board, and the final assembly might look like the buck converter in figure 2.

In figure 3 is shown a cross-sectional diagram of a device mounted on the PCB. The arrows show the various paths for heat to be removed from the active junction of the transistor and can be defined as follows: 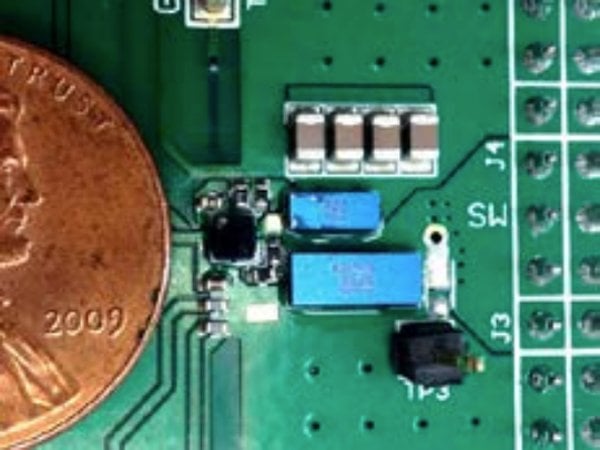 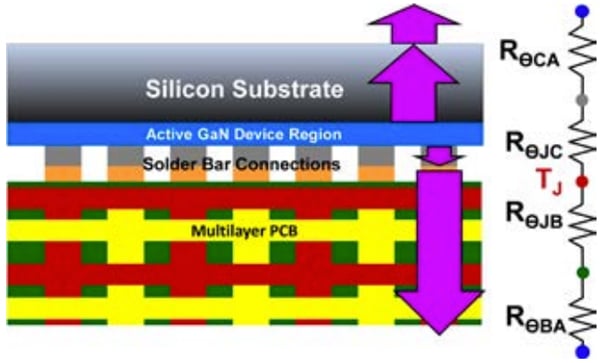 Figure 3: Components of thermal resistance for the device in figure 1.

The thermal efficiency of a package can be determined by comparing the two parameters that are uniquely determined by the package, RƟJC and RƟJB, normalized to the package area. In table 1 is a compilation of this data for several popular surface mount MOSFET packages as well as two popular eGaN FETs.

In figure 4 is a plot of the junction-to-PCB resistance for each of these packages. Red dots represent the MOSFET packages, and blue dots represent the eGaN FETs. All of the packages sampled fall on a single trend line indicating that performance for this element of thermal resistance is determined primarily by package size, and not technology. In contrast, in figure 5 is plotted the thermal resistance from junction to case (RƟJC). The CanPAK and double-sided cooling SO8 packages are far less efficient at getting the heat out of the top of the package than either the Blade package or the eGaN FETs. The eGaN FETs, however, are over 30% lower than the even the Blade when normalized to the same area. 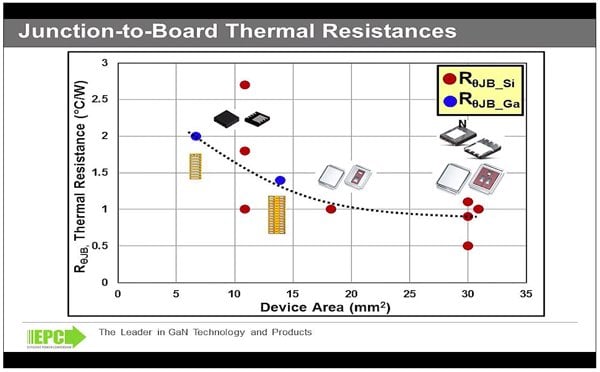 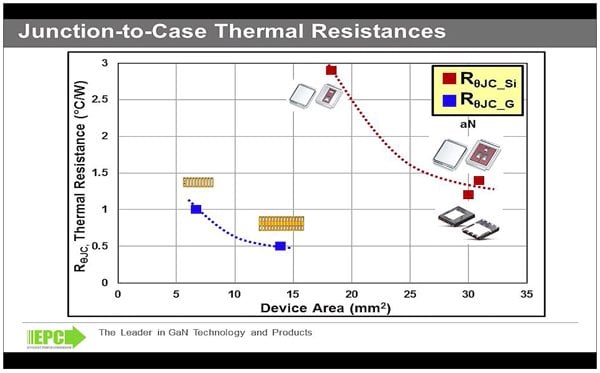 The conclusion that can be drawn is eGaN FETs in chipscale packaging can achieve higher power density than any power MOSFET in a commercially available package today.

It has been previously demonstrated that the chipscale packaging of eGaN FETs have extraordinarily small parasitic inductance and virtually zero parasitic resistance [11]. Add to this the almost ten times faster-switching speed and the superior thermal efficiency, and large improvements can be realized in power density.

To illustrate this performance gap two buck converters were constructed with virtually identical layout as shown in figure 6. The board on the left has eGaN FETs, and the board on the right has MOSFETs in 3mm x 3mm S3O8s with similar voltage and on-resistance ratings. Because GaN transistors require a smaller die size to achieve the same on-resistance as that of a silicon power MOSFET, and because they require no additional packaging, the resulting transistor footprint on the PCB is 38% smaller in the eGaN FET-based buck converter. 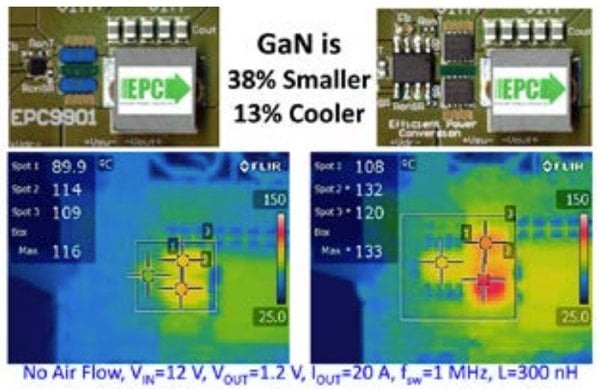 With both converters powered up at 1 MHz with 12 VIN and 1.2 VOUT, the performance difference can be measured both thermally and electrically. In figure 6 the thermal image shows that the peak temperature of the eGaN FET-based buck converter is 17oC (13%) lower than the MOSFET-based converter. This temperature discrepancy is plotted in figure 7 against output current with both zero airflow and 200 LFM airflow directed across the circuit. The corresponding conversion efficiency for both converters, operating with zero airflow, is plotted in figure 8. There is an improvement of over 3 percentage points in peak efficiency (25% reduction in losses) with eGaN FETs in the circuit. 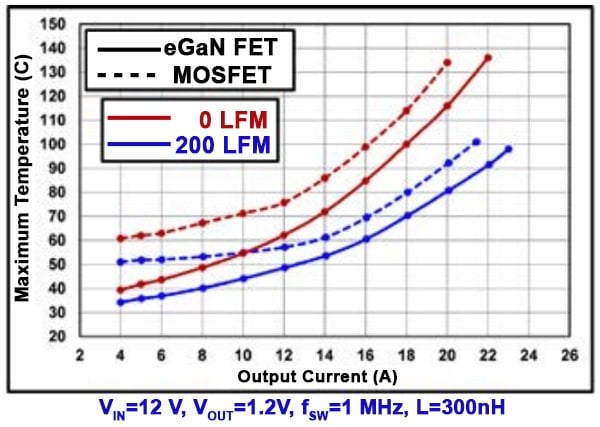 Figure 7: Maximum transistor temperature in still air (0 LFM) and with 200 LFM air flow for the buck converters in figure 6. 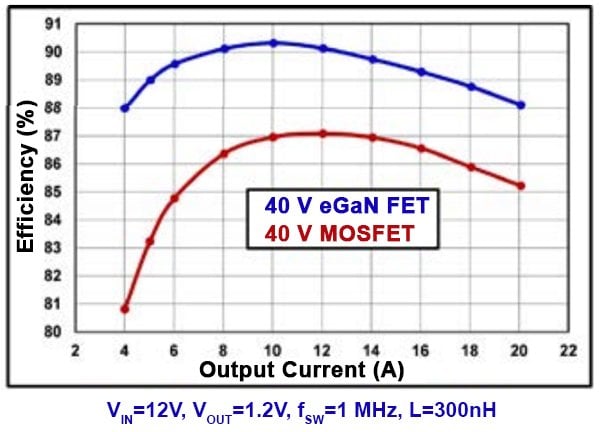 Figure 8: Efficiency comparison between the MOSFET and eGaN FET-based buck converters in figure 6 with no airflow.

Chipscale packaging is more efficient than conventional power transistor packaging. In addition to having lower parasitic resistance and inductance, it has a smaller footprint and improved thermal efficiency. Add to these attributes the superior electrical performance of GaN-on-silicon power transistors and it is clear that the aging power MOSFET is falling further and further behind.

Dr. Reusch has been with the company since 2012 and is located in Blacksburg, Virginia. He received his B.S, M.S. and Ph.D. degrees in electrical engineering from Virginia Tech. While pursuing his Ph.D. degree at the Center for Power Electronics Systems (CPES) he was the recipient of the Bradley Graduate Fellowship. He has authored over 35 peer-reviewed technical publications and given numerous invited presentations related to high frequency, high-density power conversion.

Johan Strydom holds a Bachelor's Degree in Electrical Engineering earned at the University of Johannesburg and a PhD in Power Electronics earned at Virginia Tech. Johan worked at Efficient Power Conversion as the Vice President for Applications Engineering where he is responsible for all reference designs (e.g. EPC9102, EPC9004), applications publications (technical and trade) and for new product evaluation.