This article discusses the changes in the power supply industry in terms of the regional market and emerging applications such as LED lighting.

The power supply industry is in the middle of a period of change. New opportunities are growing quickly whilst established markets falter. Because of this, the global market for AC-DC and DC-DC power supplies is set for healthy expansion from this year until at least 2017; revenue during these three years is projected to grow by $2.9 billion. This is a substantial difference from the previous three years when the overall market grew by just $1.0 billion. After 2017, the market is still projected to grow, but overall unit shipments will begin to decline as certain markets begin to contract.

Asia, as would be expected, is by far the largest regional market for AC-DC and DC-DC merchant power supplies. IHS calculates it will account for about 62% of the global market revenues in 2014. The Americas is forecast to account for over 23% of the market and the EMEA region (Europe, the Middle East and Africa), around 15%. 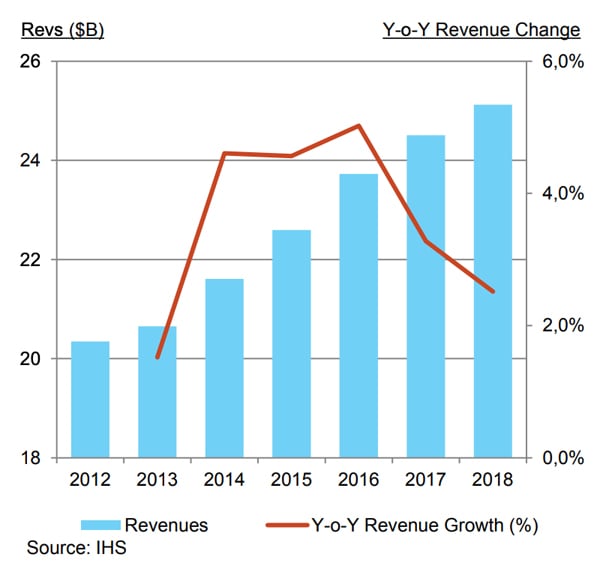 IHS predicts a slight shift back towards the Americas and EMEA in the coming years but Asia will still account for more than 60% of the market revenues in 2018. The BRIC countries of Brazil, Russia, India and China are often mentioned as key driving forces for growth, and this is generally true in the power supply industry, especially in the short-term.

Brazil is one country that is offering huge potential to power supply vendors right now. There are considerable barriers to entry for the market, including a requirement for a certain amount of the manufacturing process to take place within Brazil. However, once these are overcome, suppliers can access a relatively untapped market with very little competition, leading to higher average selling prices and so higher margins.

China has already grown to be one of the largest power supply markets in the world. IHS calculates China will account for around half of all of the power supply revenues for Asia in 2014. Growth in China, whilst showing some signs of slowing, is still higher than many countries and regions and this will help drive the market. IHS forecasts the Chinese power supply market will overtake the North-American market (the United States and Canada) by 2016, to become the largest in the world. However, from 2016, growth is predicted to slow at a faster rate as demand for low-cost power adapters (which are mostly manufactured in China, especially for cell phones) falls as discussed later in the article.

India, the third BRIC country is also increasing demand for AC-DC and DC-DC power supplies across many applications as the country continues to invest in new projects. Further demand is driven from an expanding middle class who are purchasing more electrical consumer devices than ever before. The Indian market for AC-DC and DC-DC power supplies is forecast to grow by more than $200 million from 2013 to 2018 as a result of this. 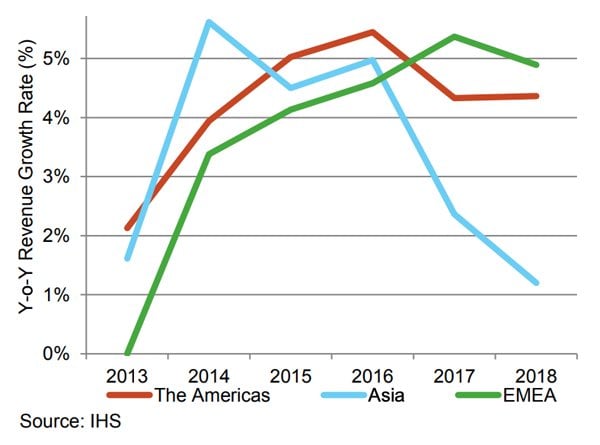 Russia is proving to be the exception in the group of BRIC countries. The market opportunity remains relatively small and is not projected to grow considerably in the next five years. There is still a tendency for the customer to build the power supplies themselves. The market in neighbouring Eastern Europe has much more happening as Western-European firms continue to relocate manufacturing and other business activities to the region.

AC-DC power supplies are still the major power supply product type in the market, accounting for more than 85% of the market revenues in 2014 with DC-DC converters accounting for the rest. AC-DC market revenues are split almost equally between the commodity and non-commodity markets. The AC-DC commodity market includes low-power adapters and chargers for cell phones, notebooks and media tablets. The AC-DC non-commodity market covers applications with lower unit shipments including telecom, datacomm and industrial, often with greater power requirements. The majority of DC-DC converters are also shipped into these markets.

Other power supply markets, including telecommunications, datacommunications and industrial, are projected to provide growth opportunities for power supply vendors in the coming years. Many projects that were cancelled or postponed are being restarted along with new projects and technology rollouts, further driving growth. The continued growth of datacentres to cope with the rise of cloud computing and the Internet of Things has also fuelled considerable growth in demand for power supplies. Revenues for power supplies to the server, storage and networking markets are projected to grow by 24% from 2014 to 2018 thanks to these factors.

Growth is also strong in the markets for cell phone power supplies; revenues are forecast to rise by more than 8% in 2014. However, growth in this market is projected to slow after 2014 as more phones begin to ship without a bundled charger. The traditional computing markets of desktop PCs and notebooks are also projected to decline as consumers continue to favour more mobile solutions, for example, media tablets and even cell phones. The market for power supplies for desktop PCs and notebooks is predicted to decline by around 2% a year from 2014 to 2018. 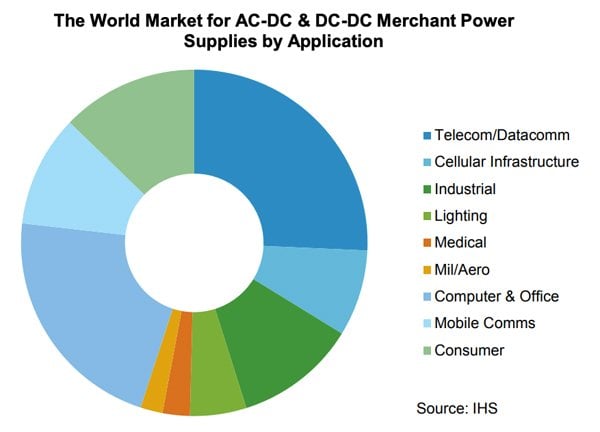 The top ten suppliers of AC-DC and DC-DC merchant power supplies were reported to account for 53% of the total market revenues in 2013. The top four suppliers, Delta Electronics, Emerson (now Artesyn), Lite-On and Acbel Polytech, remained unchanged from 2012, although as a group the companies accounted for 1.4% less of the total market in 2013.

The remaining six suppliers in the top ten were reported to be, in order, Salcomp, Mean Well, Eltek, Murata, TDK Lambda and GE Energy. All six changed rankings from 2012 to 2013. Within the top ten, the two suppliers that grew the most were Salcomp and Mean Well. Combined, these two vendors increased market share by 1.3 percentage points. Both Salcomp and Mean Well are heavily entrenched in some of the key growth markets for the power supply industry, including smartphones, media tablets and LED lighting.

Suppliers to the more traditional power supply markets, for example, telecoms and industrial have experienced weaker demand for products as end-equipment demand fell away. In 2013, a rapid decline in demand in previously strong growth markets including notebooks led to a drop in revenue for some of the largest power supply manufacturers in the market. Therefore, it is important that manufacturers continue to diversify their portfolios in order to remain competitive within this changing marketplace. 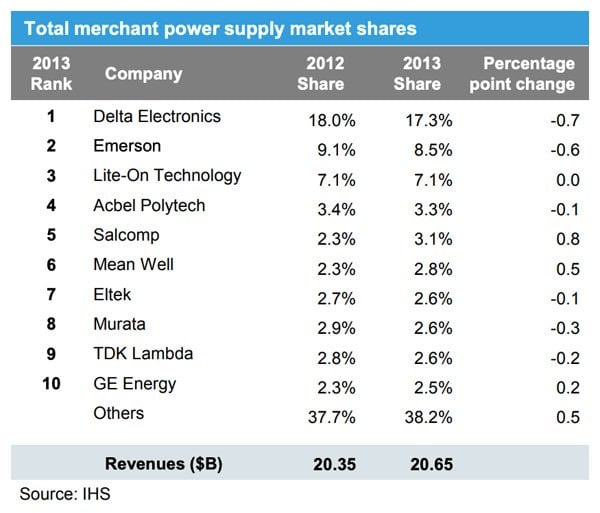 About the Industry Data

These findings can be found in the report, The World Market for AC-DC & DC-DC Merchant Power Supplies from the Power & Energy service of IHS. The full report from IHS includes analysis of the opportunities for commodity AC-DC, non-commodity AC-DC and DC-DC power supplies across 22 applications with forecasts through 2018. It also presents market-share estimates with 13 separate splits.

Jonathon Eykyn is the lead analyst for power supply research at IHS. He has been responsible for several reports in this area as well as research into the power semiconductor, LED lighting and digital power markets. Jonathon also works as part of the Secretariat team for the EPSMA (European Power Supply Manufacturers Association).