The worldwide supply of multilayer ceramic capacitors (MLCCs) is not keeping up with demand. This is due in no small part to the increased electronic complexity of cell phones, increased sales of electric cars, and a worldwide expansion of electronic content across industries.

Some smartphones have doubled MLCC usage over a few years; an electric vehicle can quadruple usage over a typical modern internal combustion engine (Figure 1). The supply shortage of MLCCs, appearing near the end of 2016, has made it especially difficult to obtain large-capacity products (several tens of µF or more) necessary for the operation of prolific power supplies used in the latest electronics. Manufacturers looking to reduce their MLCC requirements inevitably look to the capacitor requirements of power supplies—in particular, switching regulators. This places power supply designers on the front lines of mitigating the cap shortage. 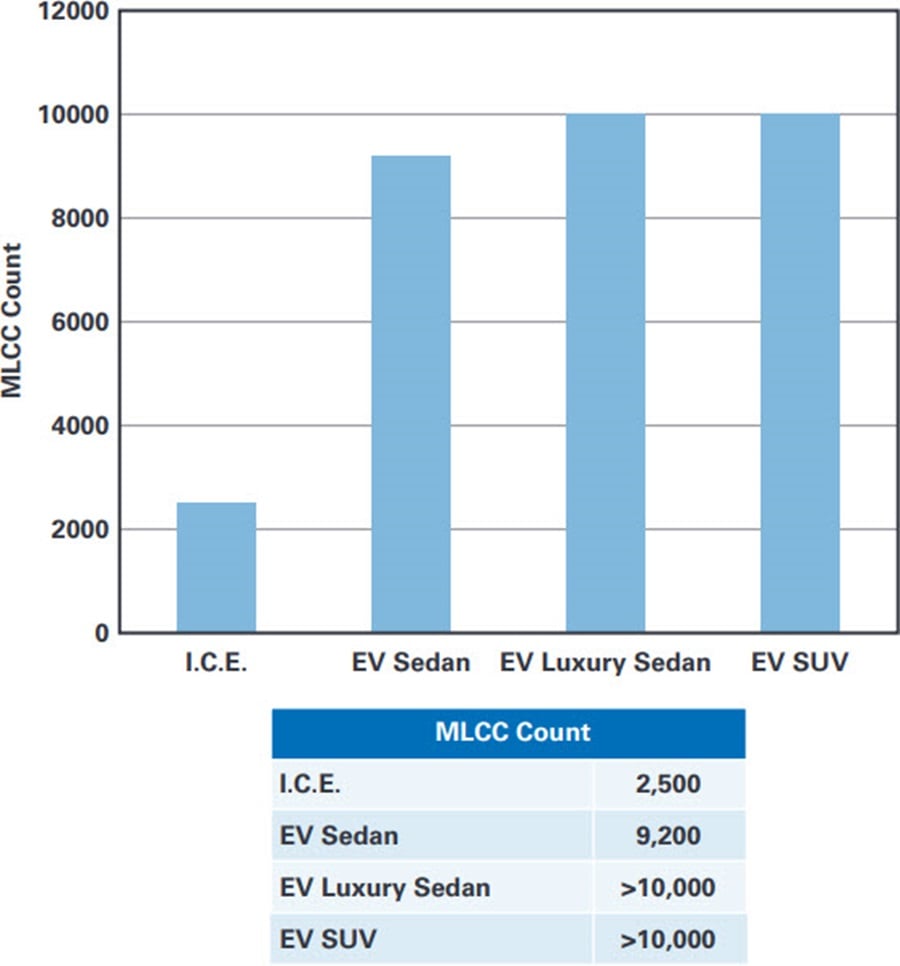 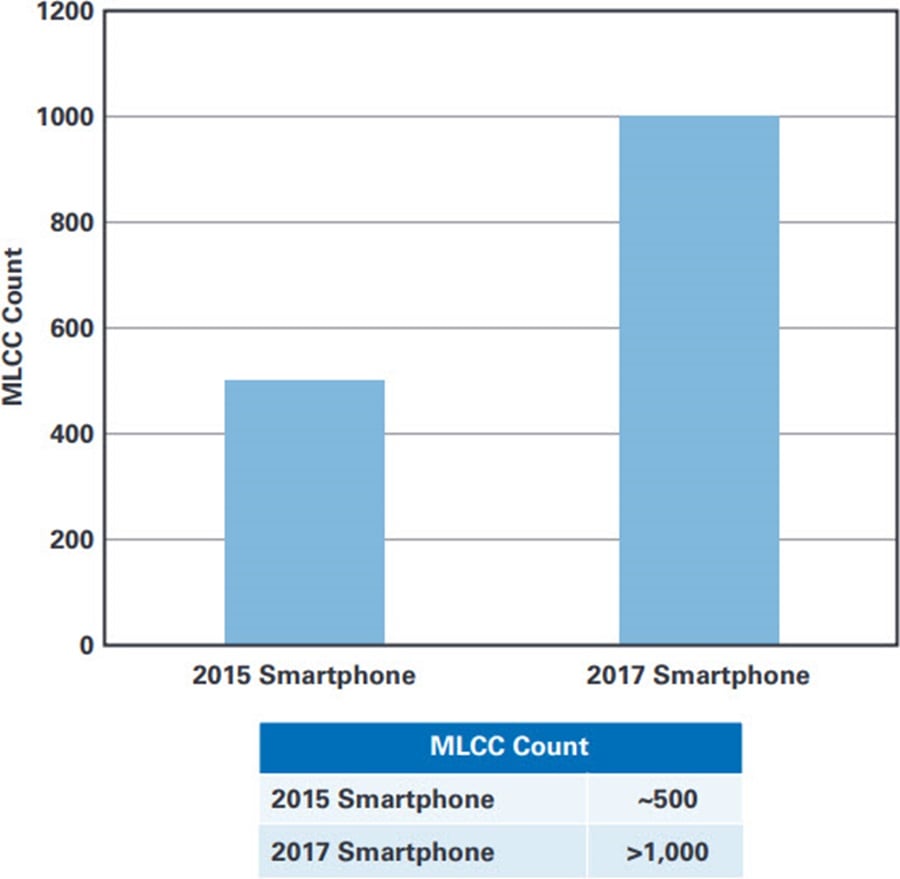 Figure 1. Increases in worldwide MLCC use in electric automobiles (a) and cell phones (b), without commensurate increases in production, have led to shortages.1

Power Circuits Use Capacitors, a Lot of Capacitors 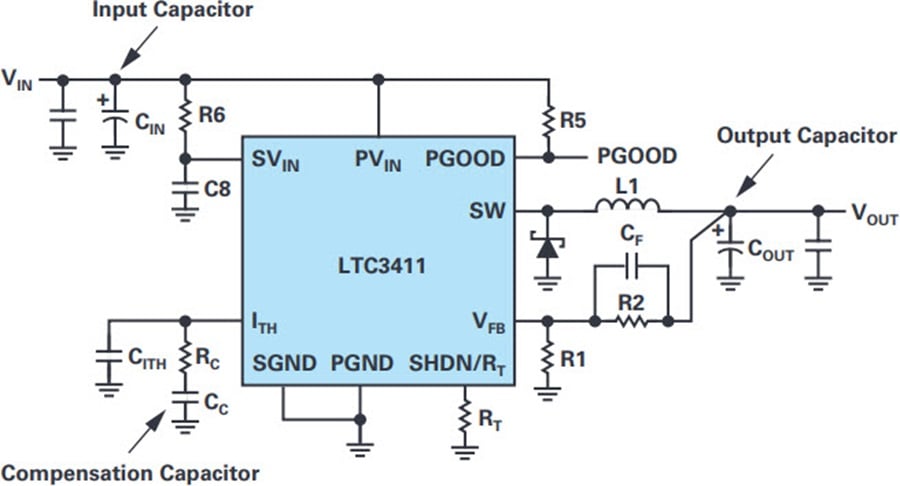 Figure 3a shows a typical current-mode buck converter block diagram, with the shaded area denoting the feedback loop and the compensation circuit. 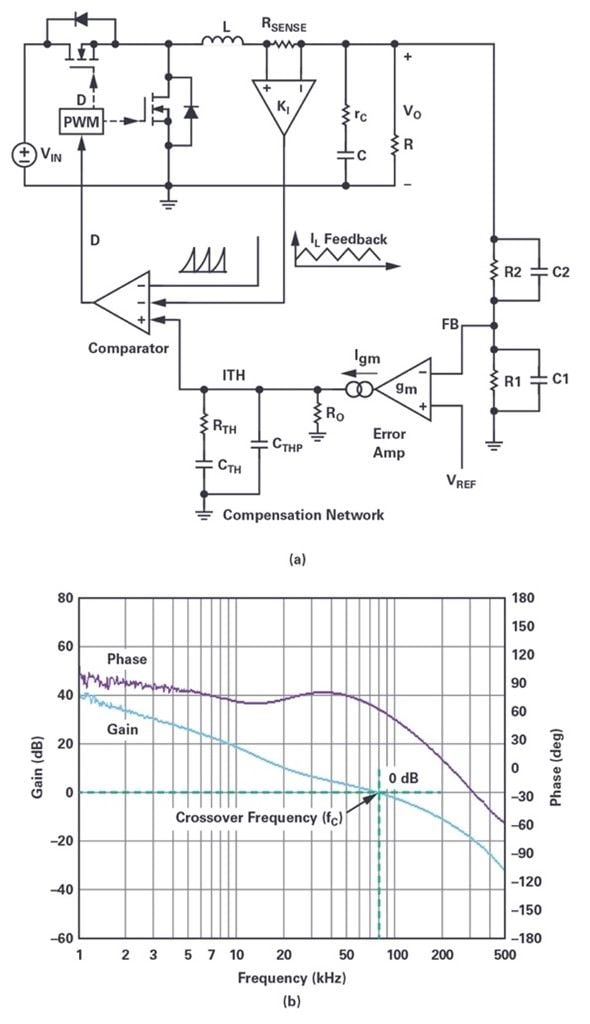 Figure 3. Block diagram of a typical buck regulator (a) and typical feedback characteristic (b). 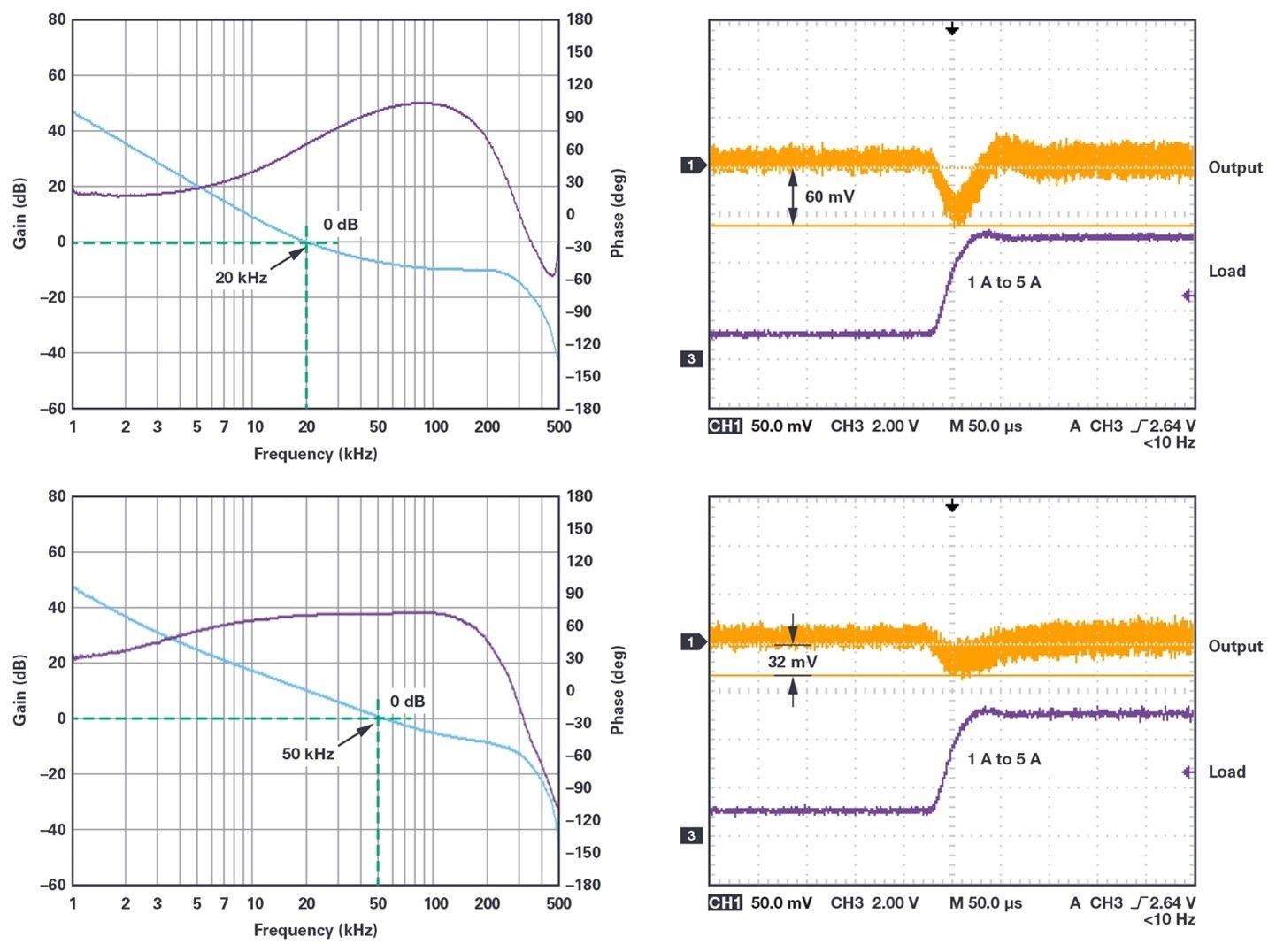 The other issue is the relationship between switching frequency (fSW) and fc. If they are similar in magnitude, negative feedback can respond to the output voltage ripple, threatening stable operation. As a guideline, set the crossover frequency to one-fifth (or less) of the switching frequency, as shown in Figure 5. 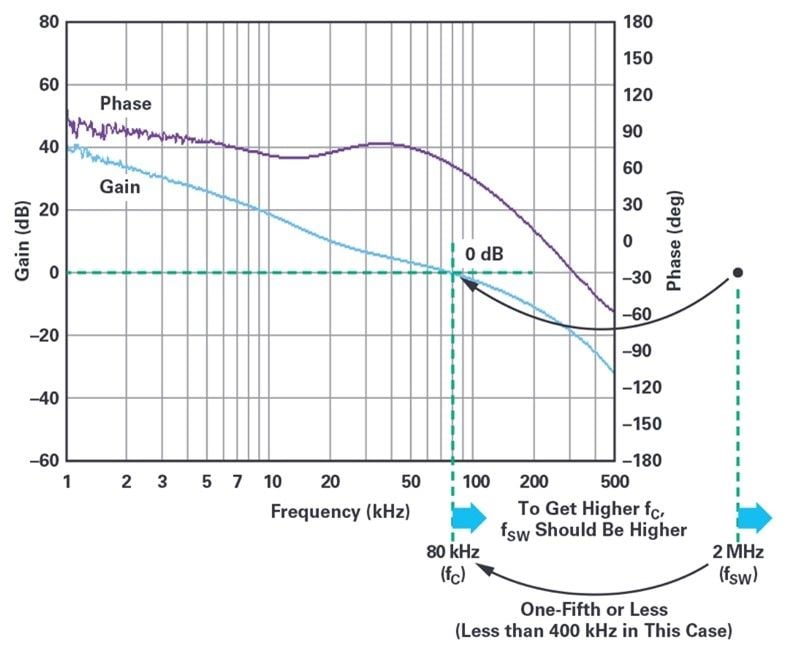 To increase the crossover frequency, you must also raise the switching frequency, which in turn results in higher switching losses via the top and bottom FETs, reducing conversion efficiency and generating additional heat. Any savings in capacitance is offset by the complexity of additional heat mitigation components: fins, fans, or additional board space.

Is it possible to maintain high efficiency at high frequency operation? The answer is yes. A number of Power by Linear™ regulator ICs from Analog Devices do just that by incorporating a unique FET control that keeps efficiency high even at higher switching frequencies (Figure 6). 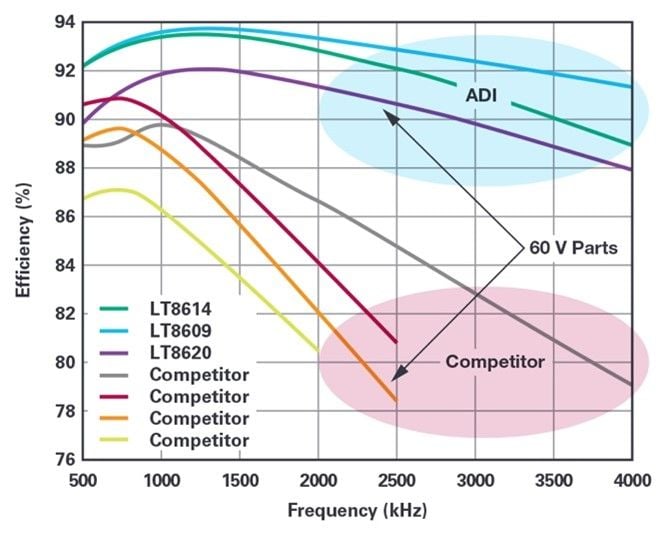 This regulator also lowers the capacitance requirements by reducing inductor current ripple (ΔIL), which in turn reduces the output ripple voltage (ΔVOUT) as shown in Figure 7. Likewise, a much smaller inductor can be used.

With a higher switching frequency, the crossover frequency can be increased, improving load step response and load regulation, as shown in Figure 8.

How about reducing bypass capacitance? The main role of the bypass capacitor is to absorb the noise generated by switching operation itself. If switching noise is reduced in other ways, the number of bypass capacitors can be reduced. A particularly easy way to achieve this is through the use of a Silent Switcher® regulator.

How does a Silent Switcher regulator reduce switching noise? A switching regulator has two current loops: when the top FET is on and the bottom FET is off (red loop) and when the top FET is off and the bottom FET is on (blue loop) as shown in Figure 9. The hot loop carries a fully switched ac current—that is, switched from zero to IPEAK and back to zero. It has the highest ac and EMI energy, as it produces the strongest changing magnetic field.

Figure 9. The hot loop in a switching regulator produces the bulk of the radiated noise because of the alternating magnetic field it generates.

Slew-rate control can be used to suppress switching noise by slowing the rate of change of the gate signals (lowering di/dt). While effective in suppressing the noise, this increases switching losses, producing additional heat, especially at high switching frequencies as previously described. Slew-rate control is effective under certain conditions and Analog Devices also offers solutions with this feature.

Silent Switcher regulators suppress electromagnetic noise generated from the hot loop without slew-rate control. Rather it splits the VIN pin in two, allowing the hot loop to be split into two symmetrical hot loops. The resulting magnetic field is confined to the area near the IC, and significantly reduced elsewhere, thus minimizing radiated switching noise (Figure 10). 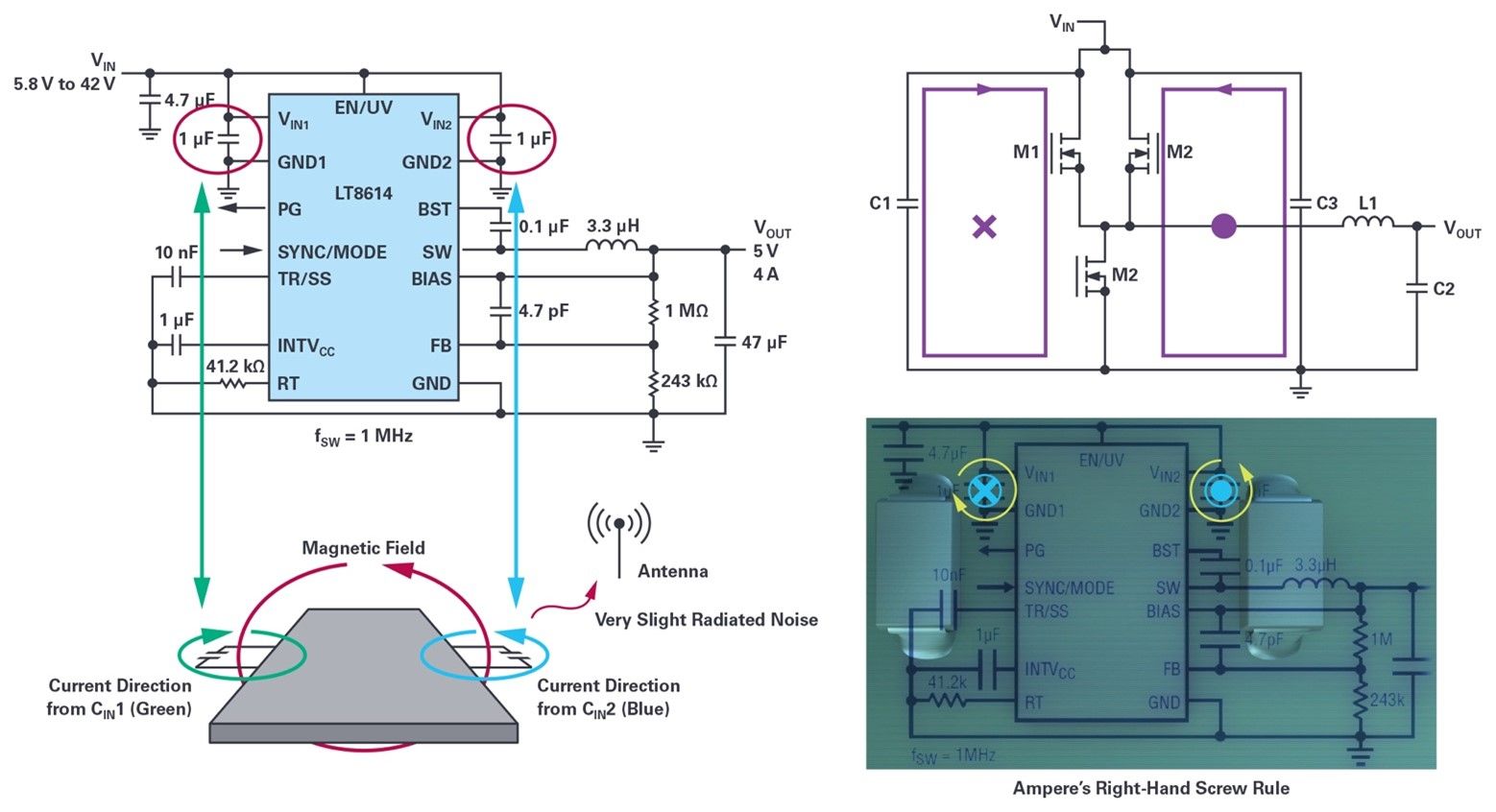 The LT8640S, the second generation of this technology—Silent Switcher 2 (Figure 11)—incorporates the input capacitors in the IC. This ensures maximum noise suppression, eliminating the need to carefully position the input caps in the layout. This feature, of course, also reduces the MLCC requirements. Another feature, spread spectrum frequency modulation, lowers noise peaks by dynamically changing the switching frequency. The combination of these features enables the LT8640S to clear CISPR 25 Class 5 EMC standards for automobiles with ease (Figure 12). 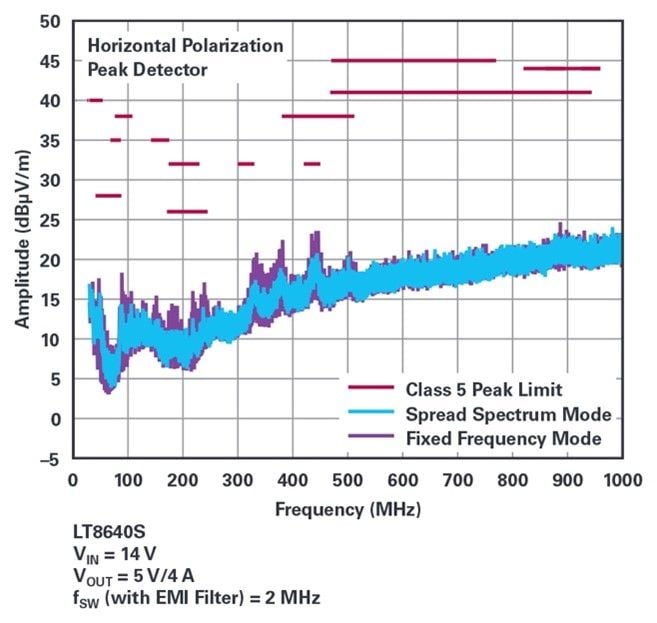 Figure 12. The combination of noise suppression features in a Silent Switcher 2 device, such as the LT8640S, enables easy clearance of CISPR 25 Class 5 peak limits even while reducing input and bypass capacitance.