SCR Based Pulse Generator for Power Choke Measurements up to 10kA

SCR Based Pulse Generator for Power Choke Measurements up to 10kA

An SCR-based pulse generator has been developed and tested on various inductive power components by Bs&T Frankfurt am Main GmbH. The pulse generator has some unique properties which benefits from the high pulsed current handling capabilities of SCR’s and offers some major advantages compared to IGBT-based systems.

In order to avoid heavy equipment for testing and large power loads, one of the solutions to this problem is to apply high power pulses to a test specimen for a short duration of time i.e. several ms to 100ms. The resulting current and voltage waveform can be used to determine the relevant properties of the DUT (Device Under Test). For this high-power SCR’s can be used in order to drive very high pulsed currents through inductors and create desaturation-saturation-transitions, enabling high load measurements and worst-case scenario documentation of the test specimens. Due to the higher pulsed current handling capabilities, SCRs are generally more suitable for this purpose than IGBTs. Bs&T has developed several pulse generators based on this technology for various applications. 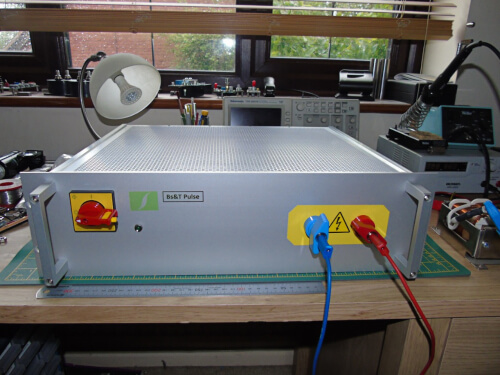 For measuring power chokes or any other kind of inductor the basic principle of operation is to apply a certain amount of energy for a short period of time to the DUT in order to drive it through a double saturation-desaturation-process and extract the relevant electrical properties out of this transition. This is achieved by charging a capacitor bank up to a certain voltage/energy level. Via an SCR switch, this voltage pulse is applied to the DUT and creates in union with an internal inductor a resonance circuit. Dependent on the DUT characteristics this voltage pulse will lead to a rising current, from which the current dependent inductance L(I) and the power dissipation losses Pdiss can be extracted via current measurements using a pearson type contactless current probe. Due to the superior pulsed current handling capabilities of SCRs the test specimen can be driven with several kA or even >10kA if required. A Diode anti-parallel to the SCR guarantees a double saturation-desaturation-transition of the test specimen. This is a unique property of the Bs&T pulse generators which can’t be met by any other choke testing equipment. 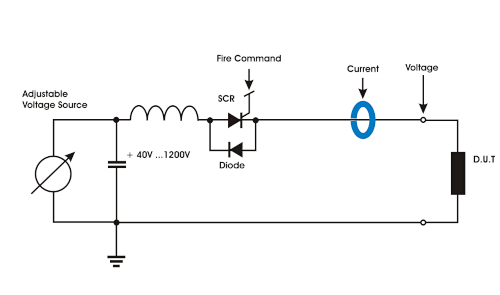 Currently, there are several Bs&T pulse generators available that cover a wide range of pulse energies and charging voltages. Pulsed currents can go up to 10 kA and beyond. All pulse generators are short circuit safe which means that if the output for any reason is shorted out the capacitor bank will safely discharge without any damage to the internal components.

Table 1. Performance data of the current versions of Bs&T Pulse.

*For an SCR pulse generator the pulse length is defined as the length of measurement data recording per pulse.

Difference to Other Measuring Methods

Recently there have been some publications that elaborated on the difference between the IGBT pulse generators and SCR-based systems, claiming that the turn-off capability makes IGBT-based systems far superior. Regarding the fundamental physics of the pulse generation and the saturation of the DUT, there is actually little difference. To see that just replace the SCR-Diode combination in figure 2 with an IGBT, they are basically the same. Both systems store electrical energy in a capacitor bank and connect the DUT to the electrical energy storage system via some kind of switch (IGBT or SCR). Hence, in both systems, a temporary resonant circuit with a nonlinear inductor is created. However, the IGBT-based systems or failure conditions. Further, the losses of the DUT can be determined by the damping curve, which is something no other pulsed system can achieve. As a consequence of this one single measurement with the SCR-based system achieves much more information than with an IGBT-based pulse generator. The following table 2 shows a comparison.

In general, the problem of the IGBT-based systems simply boils down to the low surge current capability of IGBTs, which necessitates the definition of a pulse width at the beginning of a measurement. With the SCR-based system, this is not necessary. One simply defines the discharge voltage/energy. The transition period from desaturation to saturation can be seen in the measured waveform (see figure 3). Hence, there is no need to define a pulse width when the maximum pulse width, which can be applied to a test specimen before it saturates, can actually be measured under worst-case conditions.

Regarding the measurements of inductive component properties with the Bs&T SCR based pulse generator the advantages can be summarized as follows:

Dr. Christian Teske is the founder of Consolidated Electrodynamics Limited. He holds a PhD in applied physics from the Goethe University in Frankfurt am Main and has written several publications on pulsed power applications. Dr. Teske designed the main components of the Bs&T pulse generator and also holds several patents.