This article discusses PCB design considerations required to achieve the best thermal performance in a motor drive using CIPOS Nano half-bridge Intelligent Power Modules (IPM). We present an approach that uses thermal simulations with ANSYS Icepak software to create an optimized thermal layout. We show that the simulations are validated by experimental motor test results through temperature capture via a thermal camera. This paper targets intelligent power module application design engineers and PCB layout engineers who would like to obtain better system thermal designs in their final product.

In a three-phase motor drive system, three half-bridge IPMs are needed. The placement of the three half-bridge modules on a PCB for optimal thermal performance is of interest to circuit designers. Four different placement configurations are explored. First, we did a thermal simulation on each of these configurations. Figure 1 shows the four configurations. In the simulation, we use the same copper area for each power pad, which is 1oz copper, 120mm2. To simplify the simulation and exclude other thermal impacts, we ignore peripheral components. 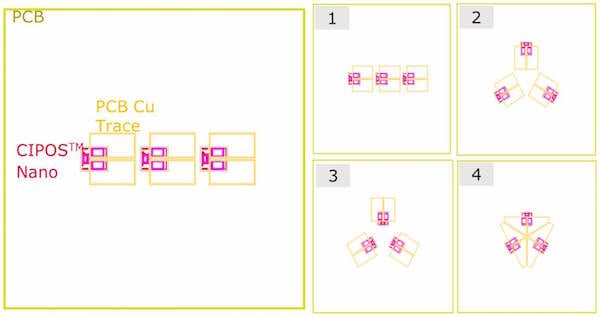 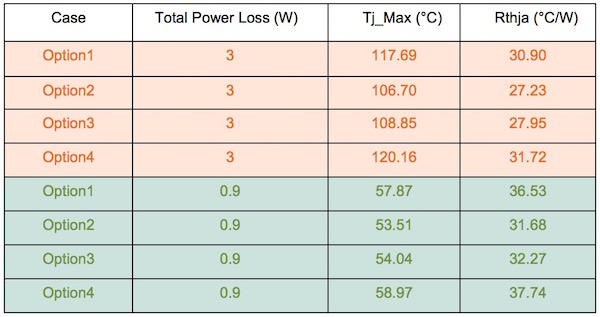 The thermal simulation shows that PCB layout of three half-bridge CIPOS Nano IPMs affects thermal performance. We would like to confirm this finding to provide customers guidelines to optimize their PCB design. We made two different PCB layouts, which are Option 1 and Option 2, and tested them out under the same operating conditions. The results did confirm the findings of the simulations. Figure 3 shows the PCB layout of regular Option 1 and the optimal layout in Option 2. 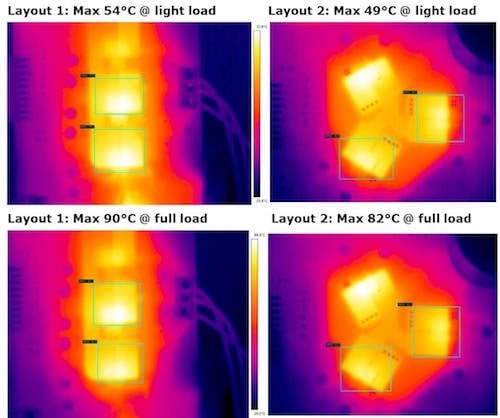 In this article, several layouts have been proposed to see which one offers the best thermal performance when three half-bridge CIPOS Nano IPMs are used. Through both simulation and experiments, Option 2 is proved to be the best option with the lowest junction temperature when the same copper area and the same power are applied to each option. On the other hand, Option 2 can sustain higher losses or use smaller PCB area if the same junction temperature is required among different designs. In addition, Option 2 provides a circular layout which fits very well in applications where the motor drive board is required to be in that shape in order to be better embedded in the motor casing.