This article discusses how good thermal management in electric machines can minimize losses and have better performance, reliability, and efficiency.

Motor designers have battled heat in motor designs for years. Thermal losses in electric machines rob motion systems of power and degrade efficiency. Excess heat can reduce the reliability of motors and shorten their lifetimes. Meanwhile, electrification in all transportation sectors is driving requirements for motors with ever-higher power densities.

LORD Thermoset SC-320 Thermally Conductive Potting Material, a relatively soft, high thermal conductivity material (3.2 W/m∙K) with sufficiently low viscosity to be used in vacuum potting, was evaluated in Nategh’s research. The electrically-insulating silicone encapsulant, designed for electrical/electronic applications, offers excellent thermal conductivity properties while retaining the desirable properties associated with silicones. Thermoset SC-320 is a two-component system that exhibits low shrinkage and stress on components as it cures, and maintains a low viscosity for ease of component encapsulation. Environmentally resistant and UL-rated to UL94V0 and 180C RTI, Thermoset SC-320 is composed of an addition-curing polydimethyl siloxane polymer that will not depolymerize when heated in confined spaces.

In the first part of Nategh’s thesis, new thermal models of liquid-cooled (water and oil) electric machines (i.e., motors) were proposed based on a combination of lumped parameter (LP) and numerical methods. A permanent-magnet assisted synchronous reluctance machine (PMaSRM) equipped with a housing water jacket, as well as an oil-cooled induction motor where the oil was in direct contact with the stator laminations, were evaluated. In the second part of the thesis, the thermal impact of using different winding impregnation and steel lamination materials was evaluated.

Conventional varnish and epoxy, as well as a silicone-based thermally conductive impregnation material (LORD SC-320), were investigated and the resulting temperature distributions in three small permanent magnet motors were compared. The thermal impact of using different steel lamination materials was reviewed by simulations using the developed thermal model of the water-cooled PMaSRM. The differences in alloy contents and steel lamination thickness were studied and a comparison between the produced iron losses and the resulting hot-spot temperatures was outlined. 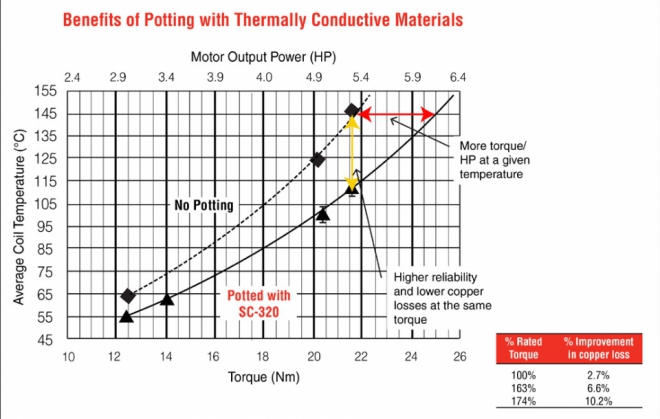 No difficulties in vacuum filling were noted with LORD SC-320 despite its viscosity being somewhat higher than those of the epoxy and varnish. In addition, the potting compound was effective at decreasing the hot spot temperatures even when the potting was not 100-percent dense. For example, the hot-spot temperature of motors potted with LORD SC-320 increased by only 3-degrees-C as the potting density was decreased from 80-percent to 50-percent, whereas the hot spot temperatures of epoxy- and varnish-potted motors increased by 19-degrees-C and 25-degrees-C, respectively, as their potting densities were lowered from 80- percent to 50-percent.

Nategh’s research showed that hot spot temperatures can be reduced by 35-percent to 50- percent using LORD SC-320 material as compared to an un-potted motor, compared to improvements of only 20-percent to 30-percent using typical epoxy potting materials. The potting compound may provide significant improvements in power density of electric motors.

Additional analysis of the data found in Nategh’s dissertation was performed at LORD Corporation. Hot-spot temperatures from the dissertation were tabulated based on the potting materials thermal conductivity (varnish only, 0.25 W/m·K; Epoxylite, 0.9 W/m·K; and LORD SC-320, 3.2 W/m·K), coolant flow rate, and applied current. Data were analyzed as a three-variable general factorial experimental design using common statistical analysis software. The results showed that end winding temperatures depended strongly on the current and thermal conductivity of the impregnation material, but there was no statistically significant dependence on coolant flow rate. 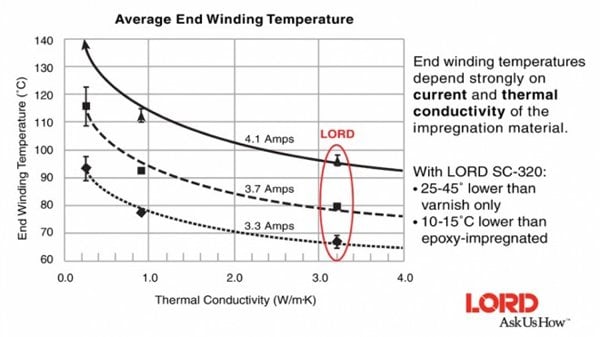 Statistical analysis further showed that with the LORD SC-320 potting compound, the average end-winding temperature was 25-degrees-C to 45-degress-C lower than the varnish-only motor; and 10-degrees-C to 15-degrees-C lower than the epoxy-impregnated motor. Compared to varnish alone, the estimated achievable current required to reach the maximum temperature of 150-degrees-C is 14-percent higher with Epoxylite and 26-percent higher with LORD SC-320.

Since the current is directly related to the torque, improved thermal performance of the potted motors offers several benefits: 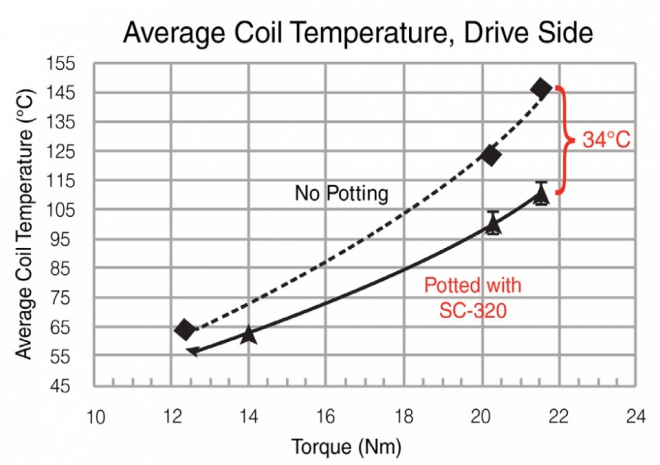 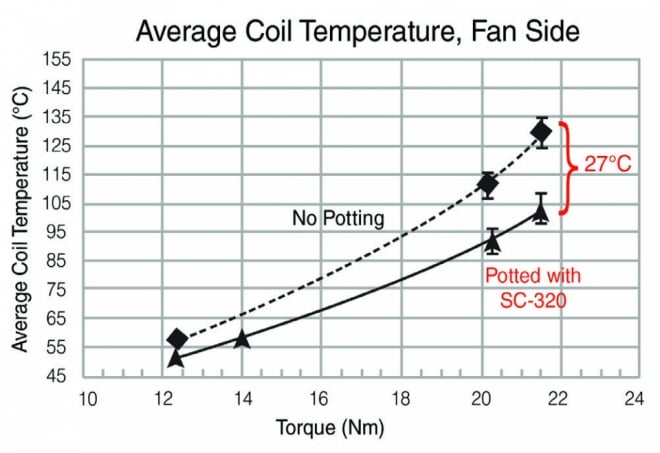 Advanced MotorTech tested the potting compound on a different type of motor from the ones used in the LORD Corporation research. They purchased Class F, 3 hp, 182T frame, totally enclosed, fan-cooled (TEFC) motors with a rated rpm of 1760; voltage: 208-230/460, three-phase, 60 Hz; full-load current: 8.4-7.8/3.0. For the test procedures, they knew that using a resin in a standard motor could improve a motor’s performance by making the motor run cooler or making it run harder without exceeding its temperature rating. Advance MotorTech went into the testing with no preconceived notions of the outcome.

For testing purposes, the motors were coupled to a DC generator. A dynamometer accurately controlled the power output of the generator, and a digital meter provided readout of the torque transducer. The testing was done in a before-and-after manner; thermocouples were added to the motor before the epoxy was added to ensure that the testing was done on an equal-match basis.

Six thermocouples were installed on each motor end (drive-end and fan-end), two per winding base, for a total of 12 thermocouples measuring winding temperature. Thermocouples were also added to the motor skin to monitor the outside temperature. Four “as-received” motors were tested using a “quick, full-load test.” From that testing, two motors with similar current, power and temperature rise were selected for subsequent tests.

A controlled test for equal comparison was done on the unpotted motors. To determine an accurate comparison between the motors, the testing was accomplished in the same room, with the same load, generator and meters; and the same ambient temperature (24.8-degrees-C). During the testing, the motors were run until they were thermally stable. Temperatures rose in the motors over time. The fan-end ran cooler and the shaft-end ran warmer, and both motors performed according to the manufacturer’s instructions.

Of the two motors chosen for the testing, one was left unpotted and one was encapsulated with LORD SC-320 silicone. For the potted motor testing, Thermoset SC-320 resin was mixed with Thermoset SC-320 hardener. The silicone can be applied with handheld cartridges or automatic meter/mix/dispense equipment. A vacuum was used to minimize air bubbles. The encapsulant was allowed to cure for 24-hours at room temperature. It can also be cured faster at 125-degrees-C for 60-minutes. After curing, the insert was removed and the air gap cleaned. During the encapsulation process, workers at Advanced MotorTech found that Thermoset SC-320 exhibited none of the “strong” odor or “eye-irritating” fumes commonly noticed in other epoxy compounds.

Thus, there was a more even distribution of skin temperature in the potted motor. This can be attributed to the air-gap-filling properties of the silicone resin. Thermoset SC-320 evenly and smoothly fills in all air gaps around the end windings. This results in even differential temperatures around the motor’s frame, and helps to mitigate any stress and performance issues that might be created as the motor operates.

The results of testing both at LORD Corporation and at KTH clearly show the benefits of potting with thermally conductive materials. Motors potted with Thermoset SC-320 offer more torque and horsepower at a given temperature and should provide higher reliability and lower copper losses at the same torque. The tests demonstrated a 30-degrees-C difference at the highest applied torque and load, and an improvement in copper losses of about 10-percent. Alternatively, at the same highest temperature, there was a 16-percent improvement in torque with the potted motor.

Developed to provide exceptional thermal conductivity for electrical/electronic encapsulating, Thermoset SC-320 also retains the desirable properties associated with silicones. The low-viscosity encapsulant provides better flow-ability while reducing the risk of air entrapment. It is designed with lower durometer to reduce mechanical stress on electronic components and lower the probability of failure. Its low coefficient of thermal expansion results in lower stresses due to temperature change.

Possible applications for SC-320 include those in which higher power at lighter weight is needed, such as motors for electric vehicles; aerospace actuators and motors; and portable power generation equipment. Better thermal management in electric motors can reduce the current, and therefore, the energy required to provide the necessary power; and can also extend a motor’s lifetime. Cost savings may also be possible due to the reduced amount of copper wire required for the motor windings. Thus, savings in weight, energy, and/or cost may all be possible depending on the application.

Anita LaFond works as the Senior Editorial Manager at Constructive Communication, Inc. where she writes articles and press releases for construction and manufacturing industry clients. She is an experienced writer and editor in industrial manufacturing market, building and construction industry. She holds a Diploma in Bachelor of Arts in Journalism.