An In-depth Comparison of HVDC and HVAC

An In-depth Comparison of HVDC and HVAC

HVDC and HVAC are two different technologies with the same purpose, but each is used in different situations. HVDC and HVAC complete each other to create ultimate solutions for power transmission.

The Economics of AC vs. DC

Economics consists of two things, system component costs and cost of losses. The two cables used in DC lines can have the same power rating as three transmission lines used in three-phase AC transmission. For the same reason, in the case of overhead transmission, transmission towers are simpler in design in HVDC.

Furthermore, the corona effect is relatively negligible in DC lines compared to AC lines. Therefore, the size of conductors for a DC line will be smaller than the size of a conductor of an AC line at the same current carrying capacity. AC systems also need power compensation and a lot of terminal equipment.

On the other hand, reaching high voltage levels in AC is much cheaper than in DC. The costs in DC systems are in the converter stations. The components used in conversion and filtration are costly.

DC cables are less affected by skin effects than AC and have negligible dielectric losses. Therefore, power losses in DC transmission lines are much less than in AC. Considering both sets, a cost-per-distance curve will have a break-even distance at the intersection point between AC and DC transmission costs.

The cost factors should also include an economic study of the present worth and annual interest over an estimated lifetime of the project. 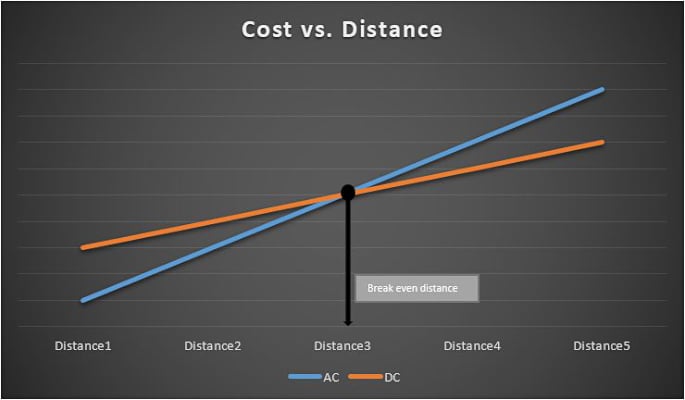 A chart comparing the initial investment of HVAC with HVDC systems and the cost change of both systems over distances. The break-even distance is the point of intersection between the AC curve and the DC curve. Image used courtesy of Ahmad Ezzeddine

The technical performance of HVDC transmission has many advantages over HVAC. Since HVDC is a converter-based technology, the transmitted power is fully controlled. HVDC links can also help control transients and stability in HVAC networks.

In three-phase HVAC networks, the power transfer depends on an angle difference between each phase. The angle increases at high distances, which creates instability in the system. HVDC transmissions have positive polarity and negative polarity lines, therefore, no phasor angles, which means no stability constraints.

HVDC lines do not need reactive power, therefore, the DC system would not need capacitor banks or SIL. This creates a solution for underwater cable transmission.

Another major advantage of HVDC transmission is the ability to use the ground conductor as a return conductor only in a few cases. Its benefits rely on squishing transmission losses and lowering the initial installation cost. In some cases, it could be used as a substitute return line during faults. Earth lines are unused in transmission in the AC system due to high inductive effects. 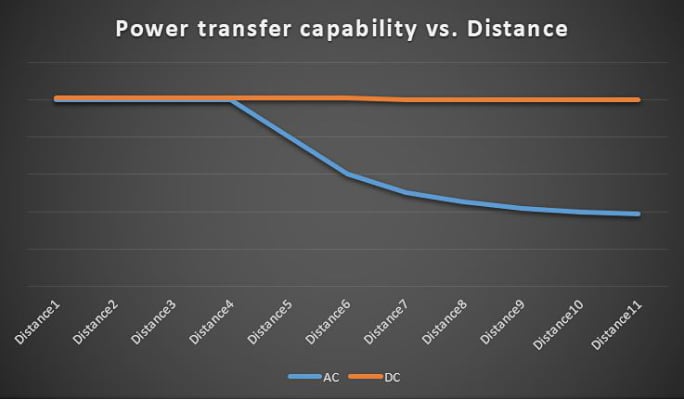 Energy availability is a percentage of outage time per total time operated by the system.

Transient reliability is a factor that specifies the performance of a DC system during a fault in an associated AC system.

To check the reliability of HVDC systems, the mean time to failure (MTTF) and mean time to repair (MTTR) are two important factors determined by statistics from previous outages in HVDC systems.

MTTF is the time a system holds between two separate outages. MTTR is the time used to repair the outage. In HVDC systems, especially after advancements in the last two decades, MTTF is high in most cases for most components of an HVDC system, and the MTTR is low for most failures. 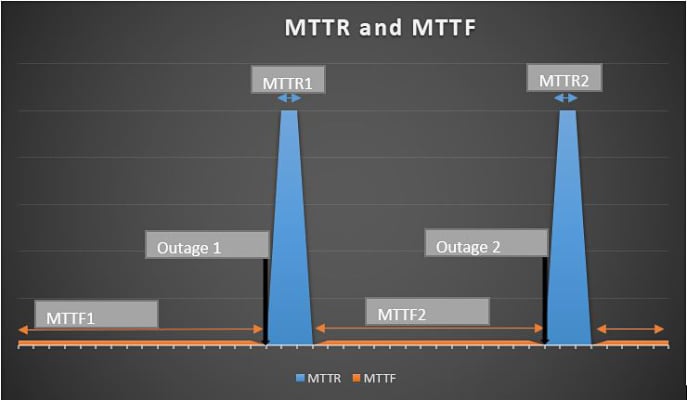 With all the statistics, HVDC links are more reliable than HVAC transmission systems.

In recent years, the environmental effects of transmission lines have come to light. Radio and television signal interference, audible noise, visual impact, and electric fields became the responsibility of grid operators and researchers to find solutions to these problems.

Two major sources of an electric field are the conductor corona effect that causes space charge clouds and the potential difference between the conductor and earth. Weather and humidity also strengthen electric fields. When a high electric field is anticipated, the area surrounding it should be fenced and marked as hazardous to prevent shock currents on terrestrials.

DC systems have no displacement currents at steady state operation; therefore, the electric field in HVDC systems is less severe than in HVAC systems.

HVDC systems cause disturbances in high-frequency waves from the kilohertz region up to the megahertz region. The reason is the operation of the converter transformers and the high-frequency switching. Electromagnetic shielding is used to control this problem, and reinforced concrete covered with wire meshes is built around the converter station. 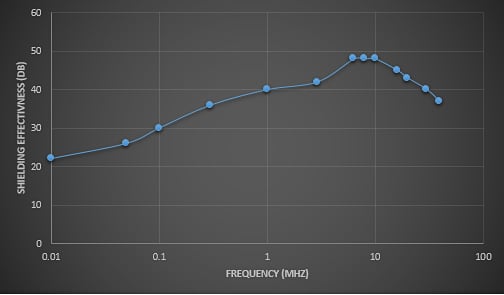 The sound generated from converting stations, power plants, and substations is called noise. The noise permitted for a plant is dependent on local standards. Examples of these standards are BS 4142:2014 and IEC TS 61973:2012/AMD1:2019.

Reactors radiate noise as a function of AC harmonics, and capacitors generate noise due to multiple individual point sources.

There are several ways to reduce noise from their sources. The reason for noise reduction is to apply to the standards set by the local authorities.

1. Purchase quiet equipment. While this solution is the best, it may not be the most feasible or cost-effective.

2. Enclose equipment for noise attenuation, such as building walls and noise dampers around equipment. This is a good solution for long-distance noise reduction but very expensive for short distances.

3. Separate noisy equipment. The alternative to this is shielding other equipment in a reflected noise path.

Transmission companies are converting from HVAC to HVDC. Of course, it depends on all the above factors after planning and calculating all requirements. The factors should all be considered, whether the economics, performance, reliability, or environmental impact.