This article discusses the history of HVDC and its progress being stronger, smarter, and greener grid and boosting the transition towards renewables.

Demand for reliable power continues to rise and so does the quest to integrate clean renewable energies. These trends are encouraging countries to install cross-border power links to improve power security and balance demand and supply. By enabling grid interconnections and facilitating the transmission of electricity beyond borders, with minimal environmental impact, HVDC is shaping a stronger, smarter and greener grid and boosting the transition towards renewables.

At the end of last year plans were announced for the world’s largest offshore wind farm to be connected to the UK grid. Once completed, the wind farms in the Dogger Bank region of the North Sea will power 4.5 million homes on the UK grid, contributing to the UK Government’s goal of cutting greenhouse gas emissions to almost zero by 2050. The project will increase current wind offshore capacity by 3.6 GW, equivalent to 5% of the UK’s total estimated electricity generation.

The announcement was timely, coinciding with news that in the third quarter of 2019, for the first time ever, renewable energy sources provided more electricity to homes and businesses in the UK than fossil fuels. Dogger Bank will be a landmark project on many fronts. Along with the impressive, headline-grabbing projections for the initiative, it’s also breaking new technological ground. The project marks the first time that HVDC has been used to connect an offshore wind park to the UK mainland.

Pioneered 65 years ago by ABB Power Grids, and still the market leader today, HVDC technology is a highly efficient alternative to alternating current (AC) for transmitting large amounts of electricity with greater stability and lower electrical losses. It enables secure and stable interconnection of power networks that operate on different voltages and frequencies (asynchronous) or are otherwise incompatible. It also provides instant and precise control of the power flow and can increase the AC grid capacity with its stabilizing features.

HVDC comes into its own on projects requiring long-distance bulk power transmission as it has been designed to minimize transmission losses. It also allows to use cables, both underground and underwater, over longer distances than with AC. This made it ideal for use in the Dogger Bank project along with applications in providing underground power links and providing shore power supplies to islands and offshore oil and gas platforms.

A History of Innovation

HVDC’s commercial history begins in 1954 when ABB Power Grids pioneered its use to bring energy from mainland Sweden to the island of Gotland in the Baltic Sea. This was the world’s first-ever commercial HVDC link and an early indicator of how the technology could be employed to meet societal power needs and improve the lives of citizens. 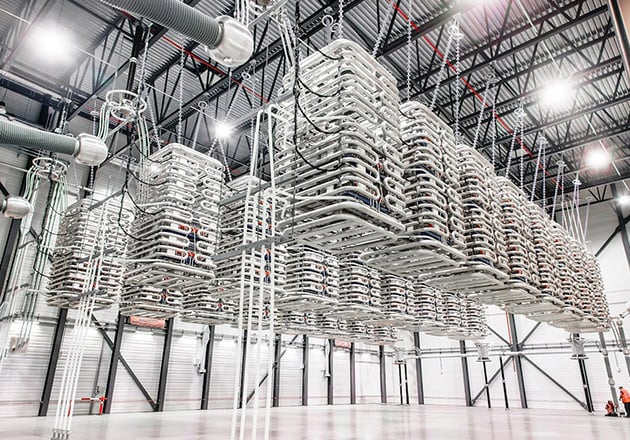 Since then, generations of engineers have pushed the boundaries of HVDC technology, resulting in more powerful links at greater distances. Today, as much as 12,000 MW and 1,100kV can be transmitted. The last 65 years have seen an impressive timeline of innovations and firsts.

ABB Power Grids has also supplied breakthrough technologies for the world’s first 1,100 kilovolts (kV) ultra-high-voltage direct current (UHVDC) transmission link. The Changji-Guquan UHVDC (ultra high voltage direct current) link transmits power from the Xinjiang region in the Northwest, to Anhui province in eastern China and sets a new world record in terms of voltage level, transmission capacity and distance. The link is capable of transmitting 12,000 megawatts of electricity - the equivalent of 12 large power plants, a 50 percent increase in transmission capacity, compared with the 800 kV UHVDC links in operation. This also helps extend the transmission distance from around 2,000 km to over 3,000 km and plays a key role in integrating remote renewables on a large scale, transmitting power over greater distances, and facilitating a more interconnected grid.

Points of Difference – AC versus DC

In the early days of electricity supply, AC (alternating current) was adopted for power transmission because it could be stepped up or down as needed by transformers, and because it could be interrupted more easily than DC. High-voltage AC grids evolved as an efficient way to connect existing islands of distribution grids and large generation units with industrial and residential loads.

AC has been the preferred global platform for electrical transmission to homes and businesses for the past 100 years. Yet high-voltage AC transmission has some limitations, such as transmission capacity and distance constraints, and the impossibility of directly connecting two AC power networks of different frequencies. HVDC can help overcome these challenges.

Over the years, ABB Power Grids has helped transform HVDC from being a relatively specialized application to a key technology enabling low-loss, high-power connections between power markets and remote renewable generation. With approximately 140 HVDC projects, ABB Power Grids accounts for around half the global installed base, representing an installed capacity of more than 200 (GW). The key advantages of HVDC are that it is a highly efficient alternative to alternating current (AC) for transmitting large amounts of electricity with higher efficiency and lower electrical losses, enabling more power to reach the consumer. Energy losses during transmission can be reduced from typical losses of between 5-10% of the energy transmitted to a loss of around 2-3% with HVDC for the same application. HVDC contributes to the secure and stable transmission of power across networks that operate on different voltages and frequencies. This makes the technology suitable for many key power applications, enabling the integration of renewable energy from offshore wind farms and interconnections with AC networks.

Energy Transition and the Environment

As HVDC technology continues to develop, its adoption will extend and increase as it meets power demands in new ways. HVDC has already become a common tool in the design of future global transmission grids. With its inherent technical properties and superior controllability, it will play an important part in the transition to renewable energy sources.

HVDC can already point to a discernible heritage in renewables which, typically, entail the transmission of power over greater distances. The early uses of HVDC saw the connection of hydro-power from remote areas to the cities. This was extended to enable the connection between factories and regions, allowing use of reserve power between grids. Most recently, as with the Dogger Bank project, we have seen HVDC employed in the integration of offshore wind which would have been extremely difficult to achieve without HVDC due to the distances involved. HVDC is a technologically and economically more efficient method for integrating renewable energy sources into the grid but it also offers the advantage of stabilizing the AC grid with its high controllability. As renewable sources become increasingly integrated into the grid, a consequence of this is that their volatility can place greater stress on the grid. To make grids more stable they need to be enlarged, which is achieved by connecting them with neighboring grids. The larger they get the more stable they become for the same level of disturbance. HVDC supports this as it allows the interconnection of asynchronous grids.

Many HVDC transmissions have been built to interconnect different power systems. The links help existing generating plants that are tied into a power system to operate more effectively. Greater efficiency of this nature means that the building of new power stations can in some cases be deferred, which makes good economic as well as environmental sense.

The Evolution of HVDC

Deployment of HVDC has led to an increasing number of point-to-point connections in different parts of the world. Now that the 100-year puzzle of creating a hybrid HVDC circuit breaker has been solved, the logical next step in the evolution of HVDC grids is to connect the lines and optimize the network.

ABB Power Grids is driving this evolution and is currently supporting China in building the world’s first HVDC grid installation in the Beijing-Tianjin-Hebei area of the country. This will help to meet higher demand during the Beijing 2022 Winter Olympics with a supply of clean and green energy. This project is breaking new ground and it’s easy to imagine that adoption of HVDC grids in Europe and the US will follow suit. For example, if we consider the concentration of sources of renewable energy in the North Sea, we can envisage a time when it will be necessary to operate a grid of point-to-point connections between them. At a geopolitical level we can also see how the capacity that HVDC offers for interconnection across national boundaries could in time help support a European single energy market.