Read on to learn how a triac along with phase-control circuitry can be used to control the current that flows through an AC load.

The average load power is controlled by varying the RMS value of the load voltage. This may be achieved by using inverse parallel-connected SCRs, or by using a single triac.

Alternating current load control using triacs is the most common thyristor control method for low to moderately high power AC loads. The load power is controlled by controlling the RMS value of the load voltage, which in turn is controlled by the trigger angle of the triac. This, in turn, controls the conduction time of the triac. 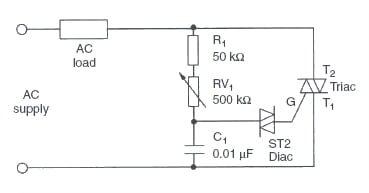 The trigger angle is controlled by varying the setting on the potentiometer RV1. As this value is increased, the time taken for the capacitor to charge up to the break-over voltage of the diac will increase. This will delay the trigger angle and therefore reduce the conduction time. This, in turn, causes the load voltage to be reduced.

With the circuit arrangement above, the load may be controlled from full conduction through to almost zero. However, when the load voltage is increased again, a ‘snap-on’ effect is noticed. This is caused by a residual charge on the capacitor. The snap-on is evident because the current will suddenly increase from zero to some intermediate value.

The snap-on effect may be reduced by one of two methods:

·         introducing a second time delay in the trigger circuit, as shown in Figure 2.

In both circuits (Figures 1 and 2), the trigger circuits are not suited to extra-low voltage supplies. This is due to the relatively high break-over voltage of the diac, which is normally in the range of 28 to 36 V.

For example, if a diac has a break-over voltage of 30 V and is operating in a circuit connected to a 32 V supply, it will not be possible to trigger the diac until 41° into the cycle. The range of control is therefore very restricted. By contrast, if the supply is 240 V, the minimum trigger angle is 5°.

This problem may be overcome by using either a UJT or a PUT trigger circuit. With both circuits, the trigger angle may be controlled from almost 0° to 180°. A representative UJT circuit is shown in Figure 3. 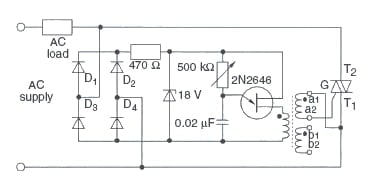 Important points that should be noted for the UJT trigger circuit are:

·         The trigger circuit is connected in such a way that it will be turned off when the triac is triggered. There will therefore be only one trigger pulse in each half-cycle.

·         Trigger pulses of one polarity only are available.

·         The pulse transformer is connected in such a way that the triac will be triggered in modes 2 and 3, maximizing triggering sensitivity. 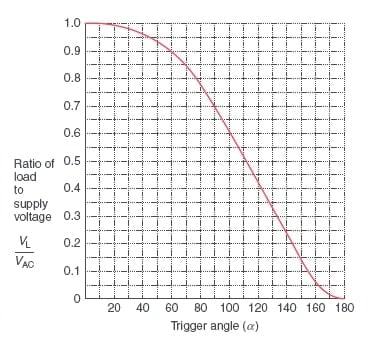 From the circuit characteristic, the ratio VL/VAC is equal to:

The waveforms produced by a triac controlling a resistive AC load for a trigger angle of 45° with diac triggering, and 90° with UJT triggering, are shown in Figures 5 and 6, respectively. 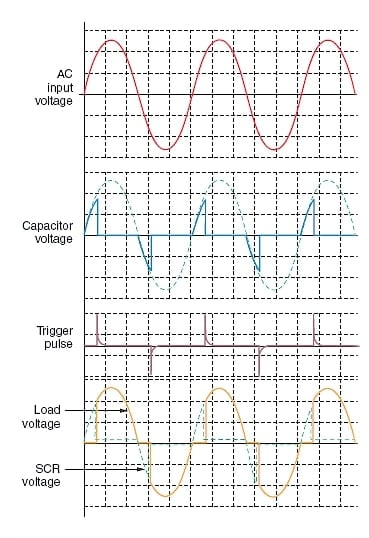 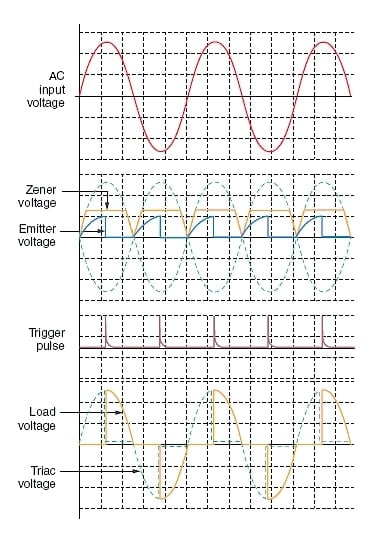 The triac controller is used to control low to moderately high power loads. Some examples are:

For higher current requirements, available triacs may not be capable of carrying the required load current. In such cases, two SCRs connected in an inverse parallel configuration are used.