This article discusses the IMS and the need for standard then offers the IPC/CPCA-4105A, a joint standard covering IMS for product designers.

A new industry standard is about to emerge, which for the first time will enable product designers to make accurate and confident comparisons between insulated metal substrates for design projects where superior thermal performance is an imperative.

Thermally enhanced printed wiring board, or Insulated Metal Substrate (IMS), has become popular in industry sectors such as advanced lighting and high-power motor control. In applications such as these the form factors of electronic controllers are often restricted, for example by standard sizes for replacement bulbs or layout constraints in industrial machinery or vehicles such as forklifts.

Compared to ordinary laminate, the high thermal performance of IMS allows engineers to size heatsinks appropriately while designing for a low die temperature to ensure satisfactory reliability. In some applications, the heatsink and its associated fittings can be designed out entirely, allowing greater miniaturization and simplified assembly.

In the past, IMS has arguably been a niche technology, chosen by engineers facing extreme design pressures. The current dramatic growth of markets for LED lighting and the increasing numbers of hybrid/electric vehicle models on sale are two important trends now bringing those pressures into the mainstream.

Demand for IMS is expected to increase, and this will inevitably bring greater cost pressure into new design projects. This will have a number of effects. Firstly, vendors are likely to diversify their IMS product ranges to help customers achieve a favorable cost/performance balance when targeting a variety of markets and applications. In addition, new IMS brands will enter the market at attractively low prices but of uncertain quality and performance.

A Technology in Need of a Standard

Engineers designing with IMS need to be able to rely on the quality and performance of their chosen IMS. In particular, aspects such as the thickness and electrical strength of the dielectric have safety implications for appliances that are operated at high voltages. In an LED-lighting application with a large number of emitters in series, the potential applied across the string can be several hundred volts. At these operating voltages, a surge can cause permanent breakdown of a weak dielectric, bringing increased risk of circuit failure or exposing the user to the risk of electric shock. In addition the dielectric characteristics, as well as other factors such as the thickness of the metal base, dictate thermal performance and hence the overall reliability of the circuit.

Historically, there have been no standardized tests for IMS products that enable engineers to compare products from different manufacturers and be sure their chosen IMS will perform as expected. During 2013, a team from Bergquist approached industry association IPC to suggest that such a framework was needed urgently. IPC readily agreed, and gave the go-ahead to set up a committee to develop standardized specifications and tests for IMS.

The forthcoming document (proposed as a joint standard, IPC/CPCA4105A), Specification for Metal Base / Copper Clad Laminates for Rigid Printed Boards is nearing completion, having initially begun in China by the China Printed Circuitry Association but now, as a joint industry standard, subject to global industry consensus review. The standard will for the first time provide an independent framework for comparing thermally-enhanced substrates from different vendors from around the world. This move will help designers select materials that will best meet the needs of their applications, and allow an assurance of quality.

IMS is available from a number of known and trusted suppliers. Generically, the IMS stack-up comprises a metal base layer, a dielectric layer or high thermal conductivity, and a top copper layer that is etched to create the circuit. The metal base is typically aluminum or copper. Figure 1 illustrates these aspects of the structure. 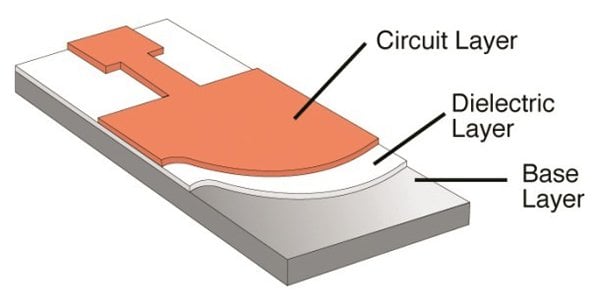 The dielectric layer is responsible for electrically isolating the circuit layer from the metal base. It must also have high thermal conductivity, to ensure efficient heat transfer from the surface-mount power components soldered to the copper pads of the circuit layer. Hence the dielectric material characteristics, nominal thickness, and uniformity of thickness, are critical factors that determine the performance of the IMS, and in particular its ability to withstand hazards such as highvoltage transients. As described earlier, breakdown of the dielectric can compromise the safety and reliability of the circuit.

On the other hand, the material properties of the metal base layer, and its thickness, govern the thermal capacity of the assembly, and hence have a critical role in determining the steady-state junction temperature of attached power components.

IPC/CPCA-4105A is now progressing through consensus review and is expected to be finalized before the end of 2015. The specification encompasses classification, qualification and quality conformance requirements. It is the first to address, explicitly, thermally conductive metal base dielectric materials, including metal base laminate and prepreg. Note that the existing IPC-4101 specification, which refers to Base Materials for Rigid and Multilayer Printed Boards, does not address boards with a metal base layer.

The IPC/CPCA-4105A classification system, developed by IPC for its portion of the joint standard includes specific designations that can be used by PCB fabricators when ordering materials from suppliers. In addition, non-specific designations are defined, which are suitable for use by board designers. These non-specific designators are designed to be easy to use without requiring fabricator-level knowledge, and can be augmented with cross-sectional views or notes on the master drawing.

The classification system standardizes a means of describing all aspects of the board, including the type of metal base and its nominal thickness, as well as laminate and metal cladding. To classify the metal base, four characters are used to define the material, and there are also designators to define thickness and tolerance, as shown in tables 1 and 2. 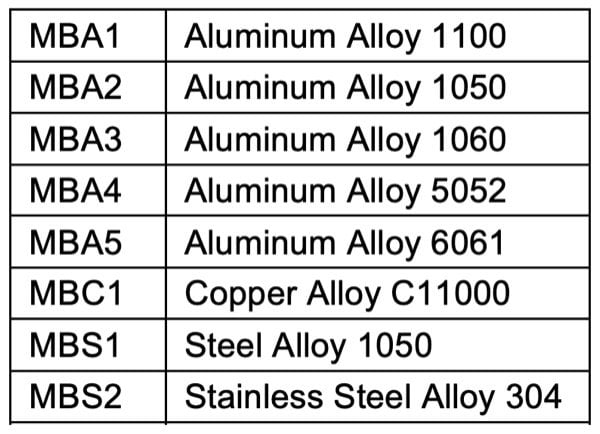 Table 1: Designators for metal base types

Acceptable methods for measuring the thickness of applicable classes of dielectric materials are also specified. These include measurement by microsection for class D materials, or using a micrometer for other material classes, as illustrated in figure 2. The new standard also covers metal cladding type as well as nominal weight and thickness, metal cladding grade, and nominal weight and thickness of metal foil, in a similar way to IPC-4101. 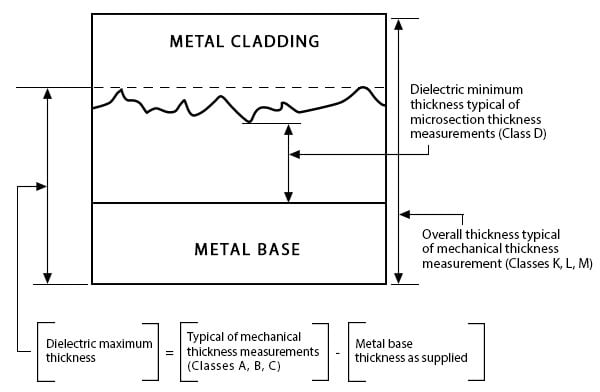 A new method to measure thermal performance is in "Round-Robin" test prior to an IPC-TM-650 test method submission. It will allow the measure on an IMS substrate coupon rather than the dielectric only measurements that are being performed currently, where method and values are varied.

Test Method for Dielectric Strength In addition to the specification documents, the test method “Electrical Strength of Metal Base Printing Wiring Material” standardizes a technique for evaluating the ability of an insulating metal base material, including conductor copper to resist electrical breakdown perpendicular to the plane of the material when subjected to short term, high voltages at standard AC power frequencies of 50-60 Hz and DC power.

The method for testing electrical strength is based on the internationally recognized standard ASTM D149. In fact, IPC/CPCA-4105A as a whole, has been developed with reference to established applicable standards by a wide variety of world-class bodies. These include IPC base material performance standards, IPC-TM-650 Test Methods, JEDEC solderability standards and EU RoHS, as well as ANSI and ISO standards for measurement and test equipment.

As development of the standard has progressed, experts from a number of industry bodies and commercial organizations have engaged with the project. The working group within the IPC is representative of a broad cross section of the industry, encompassing material supply, IMS fabrication, and circuit-board and system design. The standard, when approved, is expected to gain universal acceptance among the industry’s leading suppliers and users of IMS.

The new IPC/CPCA-4105A joint standard covering IMS will serve product designers seeking reliable solutions to their thermal management challenges, by empowering them to identify products that will meet their requirements, and make accurate comparisons in order to ensure the most satisfactory and cost-effective solution.

Dave Sommervold works as the Senior Principal Engineer at Henkel since August 2016. He is highly skilled in the field of product development, manufacturing and electronics. He earned his Bachelor's Degree in Electrical Engineering major in Digital Design at the University of Houston.