A new device being developed by Washington State University physicist Yi Gu could one day turn the heat generated by a wide array of electronics into a usable fuel source.

The device is a multicomponent, multilayered composite material called a van der Waals Schottky diode. It converts heat into electricity up to three times more efficiently than silicon — a semiconductor material widely used in the electronics industry.

While still in an early stage of development, the new diode could eventually provide an extra source of power for everything from smartphones to automobiles.

“The ability of our diode to convert heat into electricity is very large compared to other bulk materials currently used in electronics,” said Gu, an associate professor in WSU’s Department of Physics and Astronomy.

“In the future, one layer could be attached to something hot like a car exhaust or a computer motor and another to a surface at room temperature. The diode would then use the heat differential between the two surfaces to create an electric current that could be stored in a battery and used when needed,” Gu continued.

“In our research, we demonstrate a van der Waals Schottky junction defined by crystalline phases of multilayer In2Se3. Besides ideal diode behaviors and the gate-tunable current rectification, the thermoelectric power is significantly enhanced in these junctions by more than three orders of magnitude compared with single-phase multilayer In2Se3, with the thermoelectric figure-of-merit approaching ∼1 at room temperature,” stated Gu. 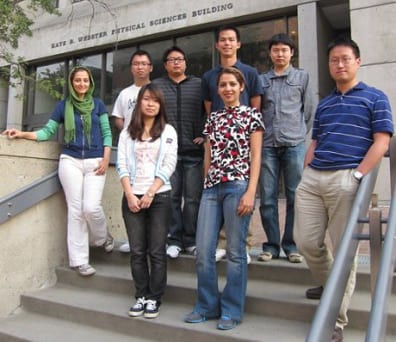 Gu Research Group in WSU’s Department of Physics and Astronomy

“Our results suggest that these significantly improved thermoelectric properties are not due to the 2D quantum confinement effects but instead are a consequence of the Schottky barrier at the junction interface, which leads to hot carrier transport and shifts the balance between thermally and field-driven currents.

Gu recently published a paper on the Schottky diode in The Journal of Physical Chemistry Letters.

In the world of electronics, Schottky diodes are used to guide electricity in a specific direction, similar to how a valve in a water main directs the flow of liquid going through it. They are made by attaching a conductor metal like aluminum to a semiconductor material like silicon.

Instead of combining a common metal like aluminum or copper with a conventional semiconductor material like silicon, Gu’s diode is made from a multilayer of microscopic, crystalline Indium Selenide. He and a team of graduate students used a simple heating process to modify one layer of the Indium Selenide to act as a metal and another layer to act as a semiconductor.

The researchers then used a new kind of confocal microscope developed by Klar Scientific, a start-up company founded in part by WSU physicist Matthew McCluskey, to study their materials’ electronic properties.

“When you attach a metal to a semiconductor material like silicon to form a Schottky diode, there are always some defects that form at the interface,” said McCluskey, a co-author of the study. “These imperfections trap electrons, impeding the flow of electricity. Gu’s diode is unique in that its surface does not appear to have any of these defects. This lowers resistance to the flow of electricity, making the device much more energy efficient.”

Gu and his collaborators are currently investigating new methods to increase the efficiency of their Indium Selenide crystals. They are also exploring ways to synthesize larger quantities of the material so that it can be developed into useful devices.

“While still in the preliminary stages, our work represents a big leap forward in the field of thermoelectrics,” Gu said. “It could play an important role in realizing a more energy-efficient society in the future.”