Toyobo Co., Ltd. and the French government research institute CEA have succeeded in making trial organic photovoltaics (OPV) small cells on a glass substrate with the world’s top-level conversion efficiency in a dim room, and trial OPV modules on a lightweight and thin PET (polyethylene terephthalate) film substrate during their joint research project. The trial products use a power-generating material for OPV that Toyobo has been developing.

In a verification experiment under neon lighting with 220 lux, equivalent to the brightness of a dark room, the trial product was confirmed to have attained a conversion efficiency of about 25 percent, or 60 percent higher than that of amorphous silicon solar cells commonly used for desktop calculators. They also completed prototype OPV modules on a PET film substrate with an effective area of 18 square centimeters although coating a power-generating material on a PET film, which was more difficult than on a glass substrate. The module was able to output about 130 microwatts under the same illumination.

OPV has attracted wide attention as a next-generation solar cell. Toyobo aims to put the material into early practical use, mainly as a wireless power source in such devices as temperature-humidity and motion sensors.

OPV cell is a solar cell which can be created by coating organic power-generating materials including carbon and sulfur atoms on a glass or plastic substrate with electrodes. As it can be shaped into flexible and thin forms, it affixes easily to walls or cloth surfaces where prevalent inorganic solar cells are unsuitable for installing. There are thus high expectations for OPV as a wireless power source for sensors and wearable devices, which are indispensable for the Internet of Things (IoT.) 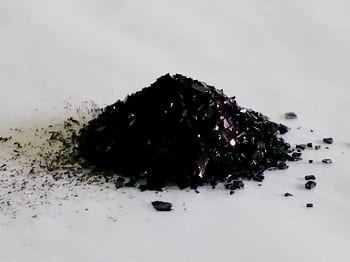 Toyobo has been developing a power-generating material for OPV to yield high power outputs from low-illumination room light sources by utilizing organic synthesis technologies the company has cultivated in its years of research on fine chemicals. The material can dissolve easily even in halogen-free solvents, allowing it to be coated evenly on a substrate, thus it can generate power stably with little individual difference.

Toyobo plans to propose the use of this material mainly to solar cell makers, based on the know-how acquired through the joint research. Firstly, the company aims to have the material used by March 2023 mainly as a wireless power source for temperature-humidity and motion sensors.