During its presentation at IEDM 2019, a CEA-Leti team reported that, "Thin-film batteries provide some of the highest energy densities of electrochemical energy storage devices, but the inability to increase the electrodes' thicknesses and control the geometry on the micrometer scale has thus far hindered their effective areal energy density and integration in miniaturized devices."

"We demonstrate an areal energy density of 890 μAh.cm-2, the highest reported so far for such devices," the paper says. "Furthermore, we show that the new TFB architecture exhibits high power density, reaching capacity as high as 450 μAh.cm-2 under 3mA.cm-2 current density." 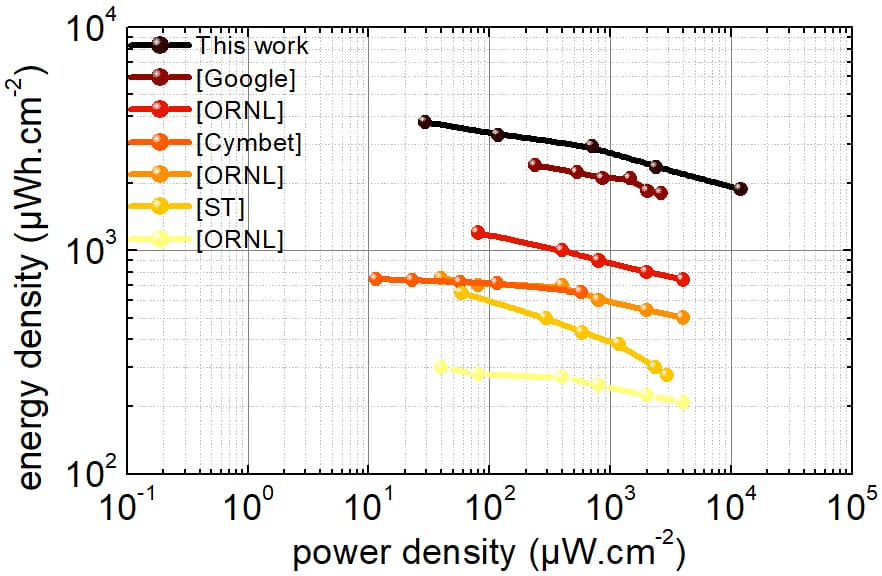 The continued miniaturization of electronics has highlighted the need for highly integrated electrochemical energy storage, while storage at the point of load reduces dissipation from power loss and I/O switching noise that limits the effectiveness of sensitive devices in unique form factors. Recent progress in the microfabrication of integrated electrochemical capacitors offers high-power density and high-frequency response, but the low energy densities of these devices can inhibit the use of microelectromechanical systems (MEMS) and autonomous device applications that require long periods between charging.

The team's solution to these challenges is a high-energy-density, millimeter-scale, thin-film battery integrating 20μm-thick LiCoO2 cathode in a Li-free anode configuration.

"Implantable sensors or biological-function monitoring systems such as intraocular pressure sensors and blood-glucose measurement would be particularly suited for our TFBs," said Sami Oukassi, lead author of the paper, "Millimeter Scale Thin-Film Batteries for Integrated High-Energy-Density Storage". "External systems, i.e. cochlear implants and smart contact lenses would also benefit from the advantages of this breakthrough."

Additional highlights of the study include:

"Battery manufacturers have been struggling to produce a power source that not only functions at the micro-scale but has high power density and energy," Oukassi said. "CEA-Leti TFBs offer this opportunity with the highest performance reported so far, compared with current TFBs and micro-supercapacitor solutions."