Picture a teeter-totter gently rocking back and forth, one side going up while the other goes down. When electricity travels long distances, it starts to behave in a similar fashion: the standard frequency of 60 cycles per second increases on the utility side of the transmission line while the frequency on the customer side decreases, switching back and forth every second or two.

This phenomenon —  called inter-area oscillations — can be a problem on hot summer days when the demand for power is high. As more power is transmitted, the amplitudes of the oscillations build and can become disruptive to the point of causing power outages.

Until now, the only safe and effective way to prevent disruptive oscillations has been to reduce the amount of power sent through a transmission line.

Sandia National Laboratories and Montana Tech University have demonstrated an R&D 100 award-winning control system that smooths out these oscillations using new smart grid technology in the western power grid. The new system allows utilities to push more electricity through transmission lines, leading to lower costs for utilities and consumers and greater stability for the grid.

“Most of the time these oscillations are well-behaved and not a problem — they are always there,” Sandia engineer David Schoenwald said. “But at a moment when you are trying to push a large amount of power, like on a very hot day in the summer, these oscillations start to become less well behaved and can start to swing wildly.”

In August 1996, such oscillations became so strong they effectively split apart the entire western electric power grid, isolating the Southwest from the Northwest.

“The economic costs and the new policies and standards that were instituted because of this catastrophe cost the utility companies several billion dollars,” Schoenwald said. “For the last 21 years, utilities have handled these oscillations by not pushing as much power through that corridor as they did before.

“Basically, they leave a lot of potential revenue on the table, which is not ideal for anyone because customers have needed to find additional power from other sources at a higher price,” Schoenwald commented.

Scientists and utility companies have known about inter-area oscillations for more than 40 years, but developing a safe and effective way of damping, or controlling, the oscillations has been elusive because of the lack of real-time measurement data from throughout the grid.

Developing a way to the control the oscillations is especially enticing because the alternative solution for sending more power is to build additional transmission lines, which cost about $10 million per mile and take more than 10 years to build and deploy.

During the last four years, the Department of Energy’s Office of Electricity Delivery & Energy Reliability and the Bonneville Power Administration have funded a research team at Sandia National Laboratories and Montana Tech University to build, test and demonstrate a control system that can smooth out inter-area oscillations in the western power grid by using new smart grid technology.

“At the moment the oscillations start to grow, our system counters them, actively,” Schoenwald said. “It’s essentially like if the teeter-totter is going too far one way, you push it back down and alternate it to be in opposition to the oscillation.”

Sandia’s new control system smooths the inter-area oscillations on the ac corridor by modulating power flow on the Pacific DC Intertie — an 850-mile high voltage dc transmission line that runs from northern Oregon to Los Angeles and can carry 3,220MW of power, which is enough to run the entire city of Los Angeles during peak demand.

“We developed a control system that adds a modulation signal on top of the scheduled power transfer on the PDCI, which simply means that we can add or subtract up to 125MW from the scheduled power flow through that line to counter oscillations as needed,” Schoenwald said.

The control system determines the amount of power to add or subtract to the power flow based on real-time measurements from special sensors placed throughout the western power grid that determine how the frequency of the electricity is behaving at their location.

“These sensors continuously tell us how high that teeter-totter is in the Northwest and how low it is in the load centers of the Southwest, and vice versa,” Schoenwald said. “These sensors are the game changer that have made this control system realizable and effective.

“The idea of modulating power flow though the Pacific DC Intertie has been around for a long time, but what made it not only ineffective but even dangerous to use was the fact that you couldn’t get a wide-area real-time picture about what was happening on the grid, so the controller would be somewhat blind to how things were changing from moment to moment,” continued Schoenwald. 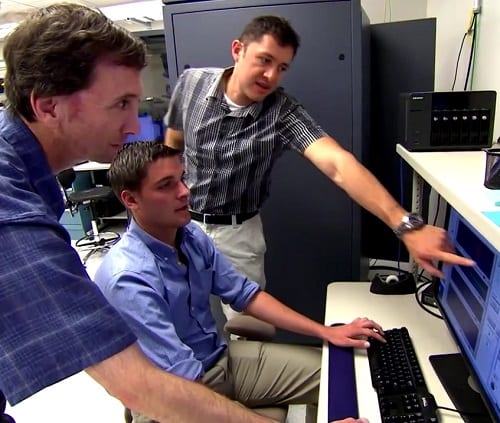 The Department of Energy has been encouraging and funding the installation and deployment of these sensors, called phasor measurement units, throughout the western grid. Schoenwald said this innovation has allowed the research team to “design, develop and demonstrate a control system that does exactly what has been dreamed about for the better part of half a century.”

“We have been able to successfully damp oscillations in real time so that the power flow through the corridor can be closer to the thermal limits of the transmission line,” Schoenwald said. “It’s economical because it saves utilities from building new transmission lines, it greatly reduces the chance of an outage and it helps the grid be more stable.”

Ensuring data integrity on the grid

Because accurate real-time data about how the grid is behaving is critical to ensuring the control system’s ability to safely counter strong oscillations, the research team has built in a supervisory system that is able to guard against data-quality concerns.

“One of the things we are very concerned about is the integrity of the measurements we are receiving from these sensors,” Schoenwald said.

Sandia’s control system and the sensors throughout the grid both use GPS time stamping, so every piece of data has an age associated with it. If the time delay between when the sensor sent the data and when the control system received it is too long — in this case greater than 150 milliseconds — the controller doesn’t use that data.

“When the data is too old there’s just too much that could have happened, and it’s not a real-time measurement for us,” Schoenwald said. “To keep from disarming all the time due to minor things, we have a basket of sensors that we query every 16 milliseconds in the North and in the South that we can switch between.

“We switch from one sensor to another when delays are too long or the data was nonsensical or just didn’t match what other locations are saying is happening,” Schoenwald stated.

Sandia demonstrated the controller on the Western grid during three recent trials in September 2016, May 2017 and June 2017. During the trials the team used controlled disruptions — events that excite the inter-area oscillations — and compared grid performance with Sandia’s controller working to counter the oscillations versus no controller being used.

The demonstrations verified that the controller successfully damps oscillations and operates as designed.

“This is the first successful demonstration of wide-area damping control of a power system in the United States,” Sandia manager Ray Byrne said. “This project addresses one north-south mode in the Western North America power system. Our next step is to design control systems that can simultaneously damp multiple inter-area oscillations on various modes throughout a large power system.”

“A lot of time R&D efforts don’t make it to the prototype and actual demonstration phase, so it was exciting to achieve a successful demonstration on the grid,” Sandia engineer Brian Pierre said.

Sandia’s control system could be replicated for use on other high-voltage dc lines in the future, and components of this system, including the supervisory system, will be used for future grid applications.