By exploiting the properties of neutrons to probe electrons in a metal, a team of researchers led by the U.S. Department of Energy’s (DOE) Argonne National Laboratory has gained new insight into the behavior of correlated electron systems, which are materials that have useful properties such as magnetism or superconductivity.

The research, to be published in Science, shows how well scientists can predict the properties and functionality of materials, allowing us to explore their potential to be used in novel ways.

“Our mission from the Department of Energy is to discover and then understand novel materials that could form the basis for completely new applications,” said lead author Ray Osborn, a senior scientist in Argonne’s Neutron and X-ray Scattering Group.

Osborn and his colleagues studied a strongly correlated electron system (CePd3) using neutron scattering to overcome the limitations of other techniques and reveal how the compound’s electrical properties change at high and low temperatures. Osborn expects the results to inspire similar research. 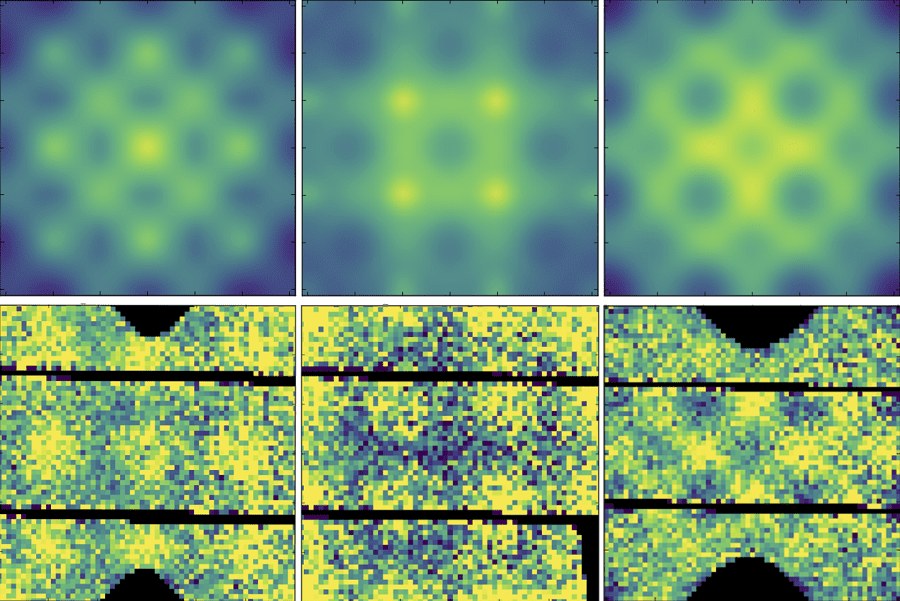 A comparison of the theoretical calculations (top row) and inelastic neutron scattering data from ARCS at the Spallation Neutron Source (bottom row) shows the excellent agreement between the two. The three figures represent different slices through the four-dimensional scattering volumes produced by the electronic excitations. (Image by Argonne National Laboratory, click on image to enlarge)

“Being able to predict with confidence the behavior of electrons as temperatures change should encourage a much more ambitious coupling of experimental results and models than has been previously attempted,” Osborn said.

“In many metals, we consider the mobile electrons responsible for electrical conduction as moving independently of each other, only weakly affected by electron-electron repulsion,” he said. “However, there is an important class of materials in which electron-electron interactions are so strong they cannot be ignored.”

Scientists have studied these strongly correlated electron systems for more than five decades, and one of the most important theoretical predictions is that at high temperatures the electron interactions cause random fluctuations that impede their mobility.

“They become ‘bad’ metals,” Osborn said. However, at low temperatures, the electronic excitations start to resemble those of normal metals, but with much-reduced electron velocities.

The existence of this crossover from incoherent random fluctuations at high temperature to coherent electronic states at low temperature had been postulated in 1985 by one of the co-authors, Jon Lawrence, a professor at the University of California, Irvine.

Although there is some evidence for it in photoemission experiments, Argonne co-author Stephan Rosenkranz noted that it is very difficult to compare these measurements with realistic theoretical calculations because there are too many uncertainties in modeling the experimental intensities.

The team, based mainly at Argonne and other DOE laboratories, showed that neutrons probe the electrons in a different way that overcomes the limitations of photoemission spectroscopy and other techniques.

Making this work possible are advances in neutron spectroscopy at DOE’s Spallation Neutron Source (SNS) at Oak Ridge National Laboratory, a DOE Office of Science User Facility, and the United Kingdom’s ISIS Pulsed Neutron Source, which allow comprehensive measurements over a wide range of energies and momentum transfers. Both played critical roles in this study.

“Neutrons are absolutely essential for this research,” Osborn said. “Neutron scattering is the only technique that is sensitive to the whole spectrum of electronic fluctuations in four dimensions of momentum and energy, and the only technique that can be reliably compared to realistic theoretical calculations on an absolute intensity scale.”

Osborn acknowledged the contributions of Eugene Goremychkin, a former Argonne scientist who led the data analysis, and Argonne theorist Hyowon Park, who performed the calculations. The agreement between theory and experiments was “truly remarkable,” Osborn said.

Looking ahead, researchers are optimistic about closing the gap between the results of condensed matter physics experiments and theoretical models.

“How do you get to a stage where the models are reliable?” Osborn said. “This paper shows that we can now theoretically model even extremely complex systems. These techniques could accelerate our discovery of new materials.”

Other Argonne authors of the paper, titled “Coherent Band Excitations in CePd3: A Comparison of Neutron Scattering and ab initio Theory,” are Park and John-Paul Castellan of the Materials Science Division. Also contributing to this work were researchers at the Joint Institute for Nuclear Research in Russia; the University of Illinois at Chicago; Karlsruhe Institute of Technology in Germany; Oak Ridge National Laboratory; Los Alamos National Laboratory and the University of California at Irvine.