After many years of technology development, and €9 million funding raised from historical and new investors, NAWA Technologies plans to begin mass producing its next-generation ultracapacitor, the Ultra Fast Carbon Battery by the end of 2019. Over the coming year, a first of its kind ultracapacitor cell production line will be installed at its Aix-en-Provence facility.

At full production, NAWA expects to achieve a capacity of over 100,000 cells per month. The company will ship cells globally for various uses in a wide range of electrical systems such as sensor-based IoT applications, power tools, and automated guided vehicles will be the first to receive the new technology.

NAWA Technologies claims that its ultracapacitor that it is marketing as its Ultra Fast Carbon Battery can offer five times more power than existing ultracapacitors and can be combined with lithium-ion batteries to provide a better balance between power and energy.

The company's development of carbon nanotube ultracapacitors is the result of 15 years of research at the CEA laboratories. A unique nanoscale structure imparts an anisotropic topology to the material.

According to the company, one-step roll-to-roll processing at atmospheric pressure enables the mass manufacturing of large areas electrodes at a lower cost than current batteries. The company has also devised a one-fits-all mass production tool for all vertically aligned carbon nanotube (VACNT) applications, embedded today in the industrialization of electrodes for battery systems. 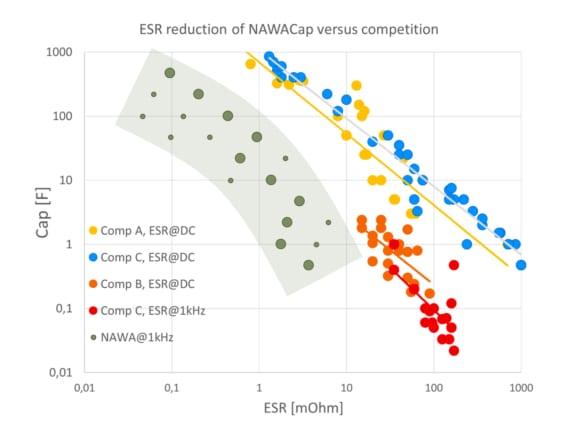 The temperature (low and high) and frequency behavior is also drastically improved, and NAWACap Power supercapacitors can thus preserve more than 5 times more energy at high or low temperature or high frequency than current products, according to the company.