Growing Identical Carbon Nanotubes Not as Simple as Hoped

Growing Identical Carbon Nanotubes Not as Simple as Hoped

Growing a batch of carbon nanotubes that are all the same may not be as simple as researchers had hoped, according to Rice University scientists.

Rice materials theorist Boris Yakobson and his team bucked a theory that when growing nanotubes in a furnace, a catalyst with a specific atomic arrangement and symmetry would reliably make carbon nanotubes of like chirality, the angle of its carbon-atom lattice.

Instead, they found the catalyst in question starts nanotubes with a variety of chiral angles but redirects almost all of them toward a fast-growing variant known as (12,6). The cause appears to be a Janus-like interface that is composed of armchair and zigzag segments – and ultimately changes how nanotubes grow.

Because chirality determines a nanotube’s electrical properties, the ability to grow chiral-specific batches is a nanotechnology holy grail. It could lead to wires that, unlike copper or aluminum, transmit energy without loss. Nanotubes generally grow in random chiralities.

The Rice theoretical study detailed in the American Chemical Society journal Nano Letters could be a step toward catalysts that produce homogenous batches of nanotubes, Yakobson said. 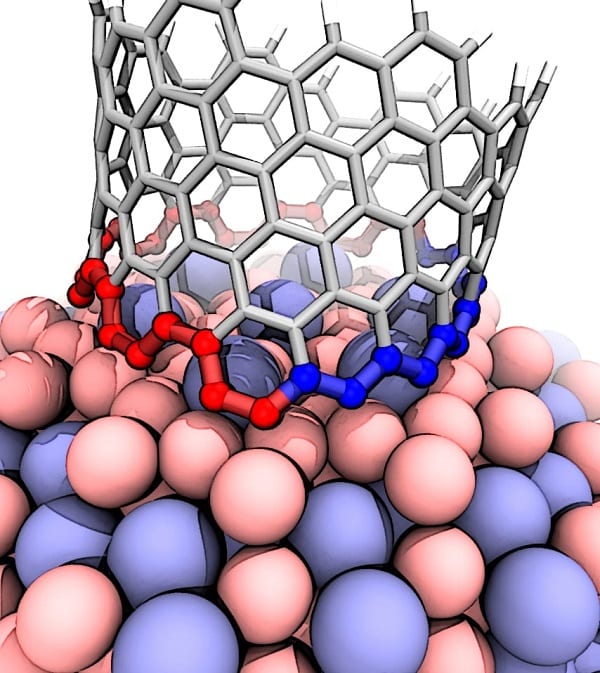 This illustration shows the interface between a growing carbon nanotube and a cobalt-tungsten catalyst. The atomic arrangement of the catalyst forces the nanotube to quickly transition from zigzag (blue) to armchair (red), which ultimately grows a nanotube that’s neither one nor the other, but nearly in the middle. The transition is a previously undiscovered characteristic of carbon nanotube growth. Illustration by Evgeni Penev

Yakobson and colleagues Evgeni Penev and Ksenia Bets and graduate student Nitant Gupta tackled a conundrum presented by other experimentalists at a 2013 workshop who used an alloy of cobalt and tungsten to catalyze single-walled nanotubes. In that lab’s batch, more than 90 percent of the nanotubes had a chirality of (12,6).

The numbers (12,6) are coordinates that refer to a nanotube’s chiral vector. Carbon nanotubes are rolled-up sheets of two-dimensional graphene. Graphene is highly conductive, but when it is rolled into a tube, its conductivity depends on the angle — or chirality — of its hexagonal lattice.

Armchair nanotubes — so called because of the armchair-like shape of their edges — have identical chiral indices, like (9,9), and are highly desired for their perfect conductivity. They are unlike zigzag nanotubes, such as (16,0), which may be semiconductors. Turning a graphene sheet a mere 30 degrees will change the nanotube it forms from armchair to zigzag or vice versa.

Penev said the experimentalists explained their work “in a way which was puzzling from the very beginning. They said this catalyst has a specific symmetry that matches the (12,6) edge, so these nanotubes preferentially nucleate and grow. This was the emergence of the so-called symmetry matching idea of carbon nanotube selective growth.

“We read and digested that, but we still couldn’t wrap our minds around it,” he said.

Shortly after the 2013 conference, the Yakobson lab published its own theory of nanotube growth, which showed that the balance between two opposing forces — the energy of the catalyst-nanotube contact and the speed at which atoms attach themselves to the growing tube at the interface — are responsible for chirality. 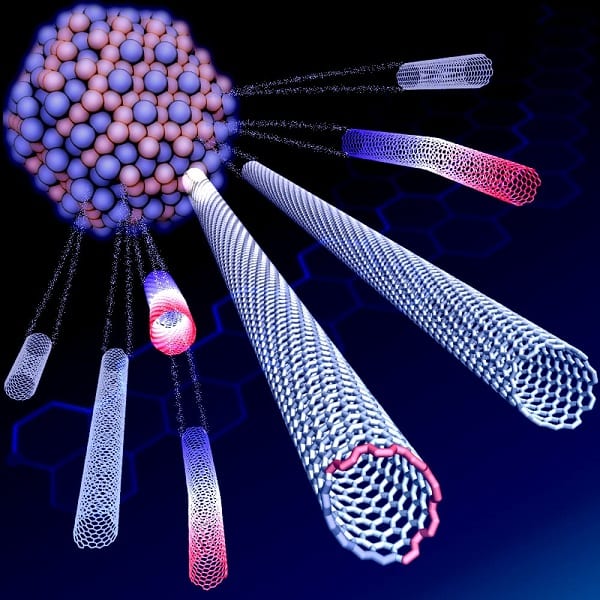 Rice University scientists have decoded the unusual growth characteristic of carbon nanotubes that start out as one chirality but switch to another, resulting in nearly homogenous batches of single-walled nanotubes. The nanotubes grow via chemical vapor deposition with a carbon-tungsten alloy catalyst. Illustration by Evgeni Penev

Five years later, that turns out to be just as true in their new paper, though with a twist. The Rice calculations show that the alloy Co7W6 promotes the formation of the Janus-like interface that ensures the necessary kink at the edge and allows carbon atoms to attach themselves to the nanotube’s foundation. But the catalyst also forces the nanotube to incorporate defects that alter its initial chirality midstream.

“We uncovered two things,” Yakobson said. “One is that the carbon atom types at the base of the nanotube separate into armchair and zigzag segments. The second is the tendency for the formation of defects that drive the chirality, or helicity, change. That makes (12,6) a sort of transient attractor, at least during short experiments. If they were able to grow forever, (12,6) nanotubes would eventually switch to armchairs.”

The unusual growth pattern might have been diagnosed much earlier if it weren’t for an age-old typo that required some dogged detective work.

“The trouble was in a standard online database that gives the crystal structure of this cobalt-tungsten alloy,” said Bets, co-lead author of the paper with Penev. “One entry was wrong. That messed up the structure so badly that we couldn’t use it in our density functional theory calculations.”

Once they found the error, Bets and co-author Gupta went back to the 1938 German paper that was first to correctly detail the structure of Co7W6. Even with that in hand, the team’s calculations used every bit of computing power they could find to simulate the energetic connections between each atom in the catalyst and carbon feedstock.

“We figured out that if we had run the calculations in series instead of in parallel, they would have taken the equivalent of at least 2,000 years of computer time,” Bets said.

“This paper is remarkable in many aspects: in the timing, the amount of detail and the surprises we found,” Penev said. “We’ve never had a project like this. We don’t yet know how this will be applicable to other materials, but we’re working on it.”

“There are four or five experimental papers, pretty recent ones, that also show a change of chirality during growth,” Bets said. “In fact, because it’s a probabilistic process, it’s essentially unavoidable. But until now it’s never been considered in the theoretical investigation of growth.”

The National Science Foundation supported the research. Computing resources were provided by the National Energy Research Scientific Computing Center, supported by the Department of Energy Office of Science; the Department of Defense Supercomputing Resource Center; the NSF-supported XSEDE supercomputer; and the NSF-supported DAVinCI cluster at Rice, administered by the Center for Research Computing and procured in partnership with Rice’s Ken Kennedy Institute for Information Technology.