Solar energy from the sun is typically captured through the use of photovoltaics. Photovoltaics is a solar energy technology that uses the unique properties of semiconductors to convert solar radiation into electricity. See Figure 1. Photovoltaics are environmentally friendly, or “green,” technology that produces energy without pollution and conserves nonrenewable energy sources. Photovoltaic (PV) systems use silicon wafers, called “cells,” that are sensitive to light and produce a small direct current when exposed to light. When PV cells are combined into large systems (arrays), they produce a significant amount of electricity. 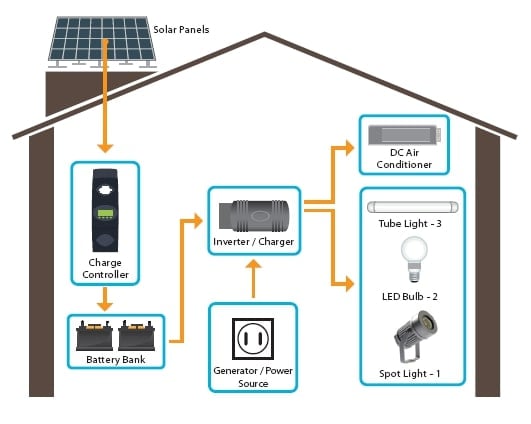 Figure 1. PV cells can be combined into arrays to produce a significant amount of power. The DC produced can be stored for use later or converted into AC in a DC/AC converter for usage. Image courtesy of Eco Friendly

PV systems are flexible and can be adapted to many different applications. The modular nature of PV system components makes them easy to expand for increased capacity. PV systems can be used in almost any application where electricity is needed, and the sun is readily available. Most PV systems also include a battery storage system.

Wind energy is harnessed by mechanically rotating wind turbines. A wind turbine is a power generation system that converts the kinetic energy of wind into mechanical energy, which is used to rotate a generator that produces electrical energy. Wind turbines can be used to produce power where no utility lines exist, or they can be connected to the electrical utility grid to supplement grid power. Wind turbine output ranges from a few kilowatts (kW) to several megawatts (MW). A commercial wind turbine primarily consists of a hub, rotor, nacelle, gearbox, generator, power converter/controller, tower, and a number of blades. See Figure 2. 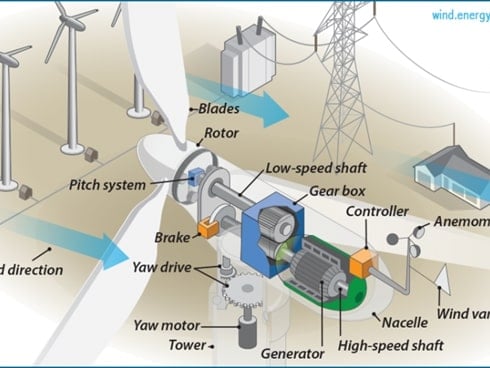 Wind turbines must be located where the sustained wind is present. Wind turbines can be grouped in parallel to construct a wind farm that produces large amounts of power. In standard generating power plants, a large percentage of the power generated is lost as line losses and heat before it reaches the consumer. Adding wind turbines to a utility system increases system efficiency locally. Since wind energy can be generated locally, long-distance distribution lines can be shortened, thus reducing transmission losses.

Wind turbines are normally used where sunlight is not in constant supply. However, the biggest problem with small residential wind turbines is efficiency. There are many conversions that take place in a typical stand-alone wind turbine. Because of these energy conversions, there is some energy loss. Energy losses include the friction in the turbine generator, heat losses, and losses due to chemical impurities in the wet cell batteries, and the AC to DC conversion, and the DC to AC conversion. The conversion losses also take place in the electronic components of the converters. 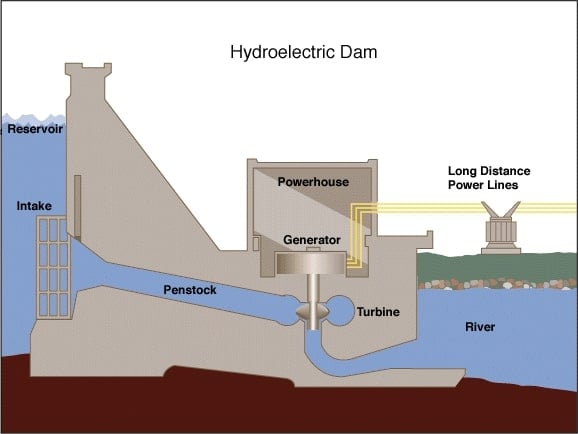 Hydroelectric power plants have four major components: a dam, a turbine, a generator, and transmission lines. The dam raises the water level of a body of water such as a river to create falling water. The force of falling water against the turbine blades is used to rotate the turbine, which converts the kinetic energy of the water into mechanical energy. The generator is connected to the turbine, which causes the generator to rotate and convert the mechanical energy from the turbine into electric energy. Transmission lines conduct electricity from the hydroelectric power plant to the electrical grid.