By 2030 the number of EV vehicles in the UK is expected to skyrocket to about 100 times its current number of about 90,000. Conventional charging of EVs gets electricity from fossil fuels. However, according to AFC Energy, its hydrogen fuel-cell technology could enable 100% clean electricity for future EV charging.

For the demo, a BMW i8 EV was the first ever car to be recharged with power generated from a hydrogen fuel cell. The demonstration took place after 10 years of the company's research and development of the company's fuel cell technology.

CH2ARGE includes AFC Energy's small-scale fuel cell connected to an inverter similar to those used by other major automotive companies at their Electric Vehicle research centers. The inverter transfers energy produced by the fuel cell to a charger. A 48V battery pack assists with peak power demands. The solution can also be tailored for both on and off-grid applications and scale up as required.

The UK government has estimated that 50% of new car sales will be EVs by 2030 which will see nine million EVs on the road up from the estimated 90,000 EVs today. By 2040, 100% of new car sales are planned to be EVs leading to the entirety of the UK's fleet of 36 million cars becoming EVs.

To recharge UK's EVs, the UK National Grid estimates predict that this will require electricity generation to be increased by 8GW. Calculations by AFC Energy show that if one in 10 of the estimated 2040 fleed of 36 million EVs is being recharged simultaneously, the UK's fleet of EVs alone would result in a peak demand surge of 25.7 GW based on an average EV battery of 57 kWh.

This maximum peak demand equates to about half of the UK's current generational requirement and is the equivalent of 7.9 new nuclear power stations or about 17,100 wind turbines.

EV Charging at Places Other than Home

AFC Energy points out that popular venues such as sports centers, stadiums and supermarkets will also have to scale up EV recharging solutions; a future scenario in which 25% of vehicles are EVs and half plug in to charge while at the venue would require 11.5MW of electricity generation.

The electric utilities would have to invest extensively in new power stations and upgrade of the distribution network unless these demands are satisfied through localized power generation. 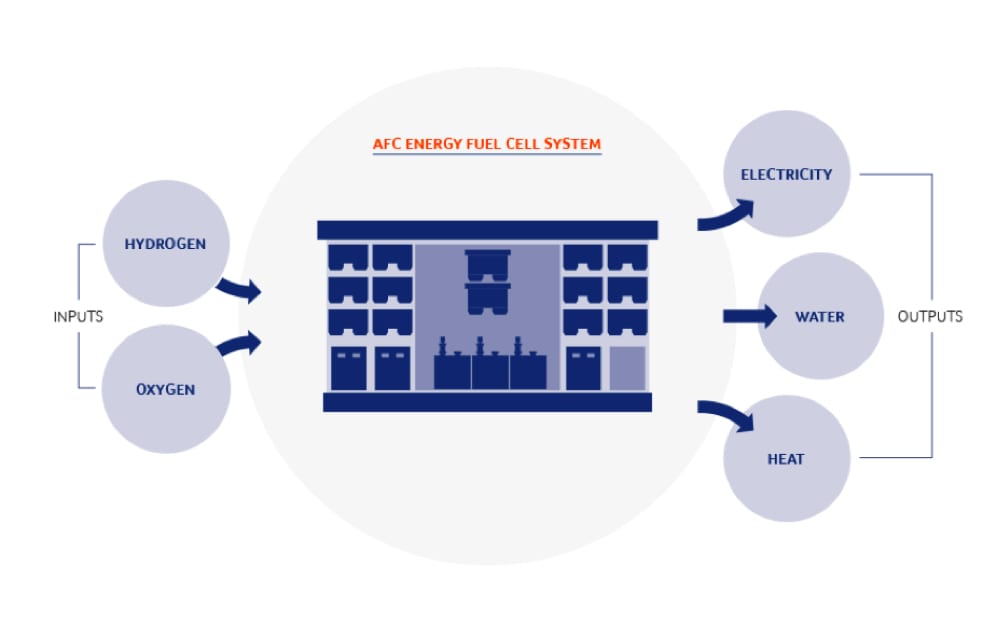 AFC Energy says its CH2ARGE system could potentially deliver locally-generated electricity through thousands of installations that generate 100% clean electricity. In contrast, the provision of power through central generation would require massive investment in new generating capacity and a re-architecting of the entire distribution network.

"By 2030, it is estimated that there could be nine million electric vehicles on the roads of Britain, up from 90,000 today," said Adam Bond, Chief Executive Officer at AFC Energy. "For this transition, we need charging stations to be embedded throughout the country, as well as seeking innovative solutions to overcome the severe limitations of centrally generated electricity. By developing and demonstrating the effectiveness of our hydrogen fuel cell in the application of EV charging, AFC Energy has shown it is ready to lead the way not only in solving the challenges of increased demand for electricity, but also doing so in a truly zero emissions approach."

AFC Energy is looking to enter into discussions with potential OEM partners and suppliers for the production of its CH2ARGE scalable EV Charge systems for commercial deployment.