Battery energy storage costs have changed rapidly over the past decade. What might this mean for future utility-scale battery deployment? New analyses at the National Renewable Energy Laboratory (NREL) suggest some possibilities: as costs are projected to fall for battery storage over the next few decades, the technology's cost competitiveness increases for a variety of applications—one being providing peaking capacity.

In their recent report Cost Projections for Utility-Scale Battery Storage, NREL's Wesley Cole and Will Frazier document cost and performance projections for utility-scale lithium-ion battery systems, with a focus on four-hour-duration batteries. The projections stem from an analysis of more than 25 publications that consider utility-scale storage costs, and they show a declining cost trajectory over time that could increase the cost competitiveness for storage in a variety of applications. 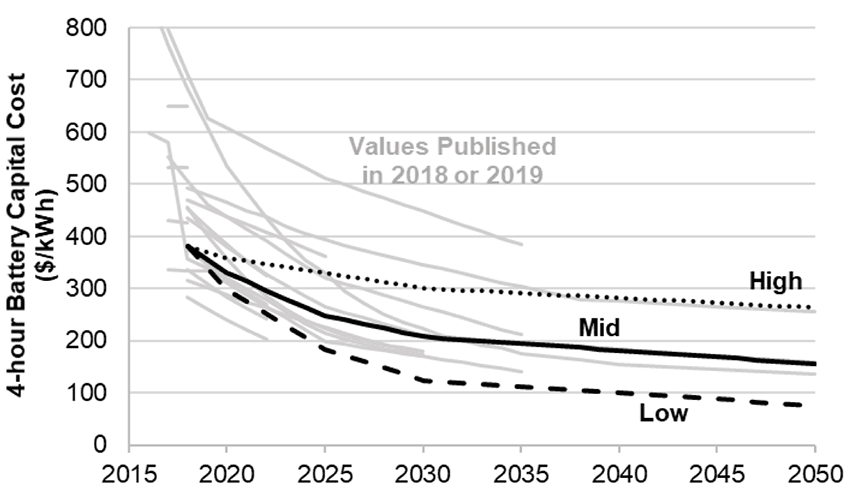 Peaking Capacity Could Be a Significant U.S. Market

One key emerging application is providing storage for peaking capacity on the grid—which is the focus of the new report The Potential for Battery Energy Storage to Provide Peaking Capacity in the United States by NREL's Paul Denholm, Jacob Nunemaker, Pieter Gagnon, and Wesley Cole.

Declining costs for battery storage have led to early deployments to serve peak energy demand, and providing peaking capacity could be a significant U.S. market for energy storage in the near future. Of particular focus are batteries with four-hour duration due to their potential to achieve life-cycle cost parity with new combustion turbines as well as rules in several regions that allow these devices to receive full resource adequacy credit.

Whether four-hour energy storage can provide peak capacity depends largely on the shape of electricity demand: as more storage is deployed, the peaking events it serves become longer—so storage must serve a wider part of the demand curve. This reduces the batteries' ability to act as a peaking resource, and therefore decreases their value. Until now, the potential for storage with this or other durations has been unclear, which has important implications for policies that support development of energy storage resources.

As their rapid cost decline has given batteries more attention in long-term planning of the power sector, the potential for batteries to serve peak demand could play a significant role in increased deployment. This deployment could then help further decrease storage costs—and storage deployed primarily to provide peaking capacity can provide additional benefits, such as a sink for low-value PV generation during non-peak periods. This in turn can enable greater PV deployment, which then would increase the potential of four-hour storage even further.