Mitsubishi Electric Corporation has developed new circuit topology and energy-efficient technologies for electric vehicle (EV) power conditioners, which will greatly facilitate the domestic use of the electricity stored in EV batteries. The use of these technologies in the creation of a prototype power conditioner allowed its size to be reduced to approximately one half that of comparable existing model while achieving approximately 30 percent less power loss.

Mitsubishi believes that their compact design will enable the conditioners to be installed in confined spaces such as domestic garages, facilitating their deployment in typical home environments. The newly developed technology facilitates the domestic consumption of surplus electricity generated by residential photovoltaic (PV) systems as well as offering homes a stable power supply in the event of a blackout.

Going forward, Mitsubishi Electric plans to mass-produce small high-efficiency power conditioners for EVs, thereby contributing to the realization of a low-carbon society through the increased use of renewable energy.

EV power conditioners consist primarily of a dc-dc converter and a dc-ac inverter to allow the charging and discharging of the EV's batteries. These converters and inverters have inductors for transmitting electricity to EVs and power lines, which account for much of the size of the power conditioners.

With this latest development, Mitsubishi Electric has created a solution capable of high-speed switching of the power semiconductor devices used in dc-dc converters, enabling operation with shorter pulse periods (Fig. 2 and 3).

In addition, suppression of the voltage fluctuations that accompany the switching of power semiconductor devices allows the use of a three-level inverter circuit in the inverter (Fig. 2). This can reduce the amplitude of the voltage below that of a conventional two-level inverter circuit, allowing a reduction of the input voltage to the inductor connected to the output side of the circuit (Fig. 4).

This allows the inductor to be miniaturized, and in conjunction with the optimized placement of components, facilitates a reduction in the size of the overall power conditioner of almost 50 percent. 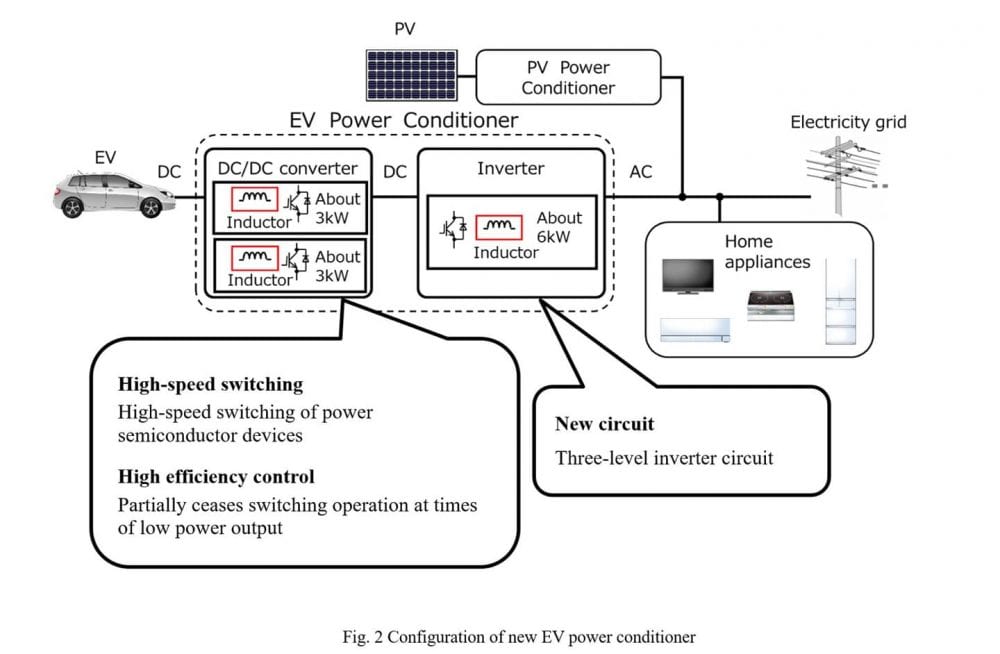 When EV storage batteries are used in standard homes, typical power consumption is less than 1kW. Reducing power loss at these levels enables the effective utilization of surplus electricity generated by the PV and stored in the EV's batteries, resulting in a reduction in the electricity needed to be purchased by the home owner.

The new technology is capable of highly efficient control of two dc-dc converters with an output of 3kW. When power output is low, the system uses only one of the converters and partially stops the switching of the active converter's power semiconductor devices. As a result, the power loss of power semiconductor devices at outputs of 1kW or less can be reduced by approximately 30 percent.