Able to hold 50% more energy than Li-Ion batteries, researchers hope a better understanding of what makes LMBs fail will make them safer and more useful in commercial applications.

Lithium-ion batteries are everywhere, and they have become a preferred choice for most energy storage solutions. But, like many other batteries, they are far from perfect; their energy density is limited, and they have issues like degradation, overheating, etc. Another battery technology may be the lithium-ion battery's immediate predecessor: the lithium metal batteries or LMBs. Lithium metal batteries are lithium batteries but with an anode made of lithium metal. The metallic lithium emits electronics and positively charged ions much easily, making it an attractive solution.

Lithium metal batteries are getting much research attention because of their ability to hold around 50% more energy than lithium-ion batteries. However, their failure rate and safety issues are relatively higher. These problems are throttling back the commercialization of these batteries.

Researchers, until now, have theoretically hypothesized why these batteries fail, but no direct evidence has been found yet supporting these theories. To confirm these theories, it is important to look inside an intact lithium metal battery after they have undergone a few hundred charge-discharge cycles. Diagnostic methods like X-rays are unsuccessful due to the outer metal shell. Moreover, ripping apart the outer part and battery layers may distort the evidence from the inside.

Researchers from the Sandia National Laboratories, in collaboration with Thermo Fisher Scientific Inc., the University of Oregon, and Lawrence Berkeley National Laboratory, have published nanoscale images inside intact lithium-metal coin batteries in ACS Energy Letters. The scientists did this with the help of lasers and cryogenics. 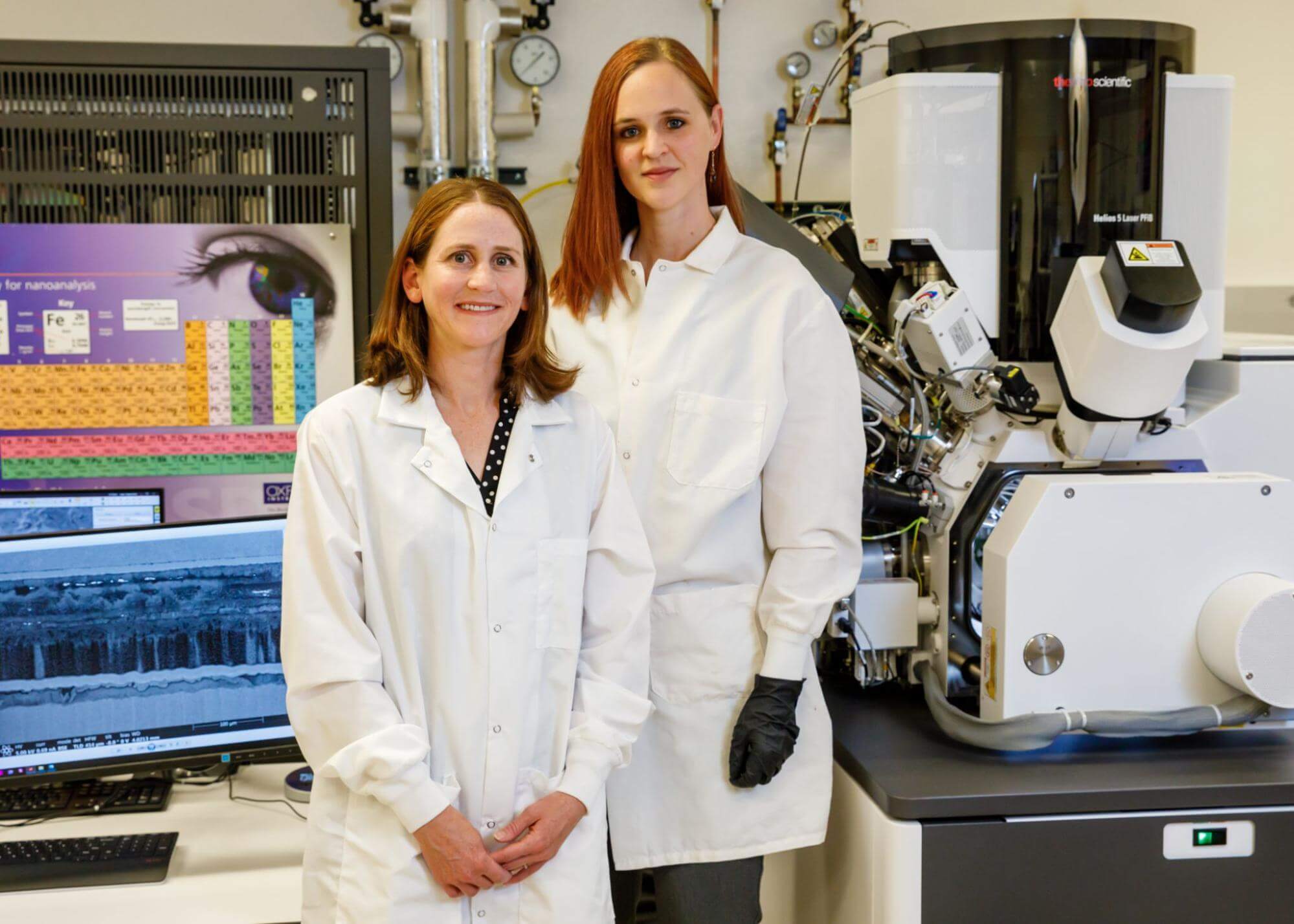 Sandia National Laboratories scientists Katie Harrison, left, and Katie Jungjohann has pioneered a new way to look inside batteries to learn how and why they fail. The image was taken by Bret Latter

Katie Jungjohann, a Sandia nanoscale imaging scientist at the Center for Integrated Nanotechnologies, and her collaborators used a microscope with a laser to mill through the batteries' outer shell. They paired it with a sample holder that holds the cell's liquid electrolyte frozen at -148 and -184 degrees Fahrenheit. The opening formed by the laser is large enough to pass a narrow electron beam and bounce back onto a detector. This approach delivered a high-resolution image of the battery's internal cross-section.

"This is what battery researchers have always wanted to see," Jungjohann said.

According to the researchers, this method will challenge prevailing theories and could help make future high-performance batteries, such as for electric vehicles, safer, more powerful, and longer-lasting.

What Makes These Kinds of Batteries Fail?

For gaining knowledge on how LMBs fail, the researchers repeatedly charged and discharged lithium coin cells with high-intensity currents that electric vehicle batteries need to handle. Some cells went through a few discharge cycles, while other cells lasted through more than a hundred cycles. The cells were then shipped to Thermo Fisher Scientific in Hillsboro, Oregon, for analysis. The team was expecting to find needle-like lithium spikes that form after repetitive cycles, punching through the plastic separator located between the anode and the cathode, forming a short. But what they were unable to understand was how this soft metal can penetrate through the separator.

Upon analysis, the researchers found out that due to the repetitive cycles, there was solid-electrolyte interphase (SEI) formed in the negative electrode. The SEI, formed on the electrode, results in the consumption of lithium ions. This formation tore holes in the separator, creating metal deposits to spread and form a short. According to the researchers, lithium deposits and their byproducts act less like a needle and more like a snowplow.

According to Katie Harrison, who leads Sandia National Laboratories' team, better separator materials should be used, tuned for lithium metal. She added that further research will be needed to reduce the formation of byproducts.