A battery membrane technology developed by researchers at the U.S. Department of Energy's Lawrence Berkeley National Laboratory (Berkeley Lab) may point to a solution for storing renewable energy. So-called flow batteries, which store electricity in tanks of liquid electrolyte - could be the answer, but so far utilities have yet to find a cost-effective battery that can reliably power thousands of homes throughout a lifecycle of 10 to 20 years.

As reported in the journal Joule, the researchers developed a versatile yet affordable battery membrane - from a class of polymers known as AquaPIMs. Pictured above is an AquaPIM sample developed by the Berkeley Lab team. (Credit: Marilyn Sargent/Berkeley Lab)

This class of polymers makes long-lasting and low-cost grid batteries possible based solely on readily available materials such as zinc, iron, and water. The team also developed a simple model showing how different battery membranes impact the lifetime of the battery, which is expected to accelerate early stage R&D for flow-battery technologies, particularly in the search for a suitable membrane for different battery chemistries.

Recommended for you: SunPower Splitting into Two Independent, Publicly-Traded Companies

"Our AquaPIM membrane technology is well-positioned to accelerate the path to market for flow batteries that use scalable, low-cost, water-based chemistries," said Brett Helms, a principal investigator in the Joint Center for Energy Storage Research (JCESR) and staff scientist at Berkeley Lab's Molecular Foundry who led the study.

"By using our technology and accompanying empirical models for battery performance and lifetime, other researchers will be able to quickly evaluate the readiness of each component that goes into the battery, from the membrane to the charge-storing materials. This should save time and resources for researchers and product developers alike," added Helms.

(Illustration, left): AquaPIM membranes are made of a special class of polymers that become ionized at high pH, yielding pores that are highly conductive and highly selective. (Right) The material can be molded into a variety of shapes, such as a freestanding membrane. (Credit: Brett Helms/Berkeley Lab)

Most grid battery chemistries have highly alkaline (or basic) electrodes - a positively charged cathode on one side, and a negatively charged anode on the other side. But current state-of-the-art membranes are designed for acidic chemistries, such as the fluorinated membranes found in fuel cells, but not for alkaline flow batteries.

Fluorinated polymer membranes are also expensive. According to Helms, they can make up 15% to 20% of the battery's cost, which can run in the range of $300/kWh.

One way to drive down the cost of flow batteries is to eliminate the fluorinated polymer membranes altogether and come up with a high-performing yet cheaper alternative such as AquaPIMs, said Miranda Baran, a graduate student researcher in Helms' research group and the study's lead author. Baran is also a Ph.D. student in the Department of Chemistry at UC Berkeley.

Getting back to basics

Helms and co-authors discovered the AquaPIM technology - which stands for "aqueous-compatible polymers of intrinsic microporosity" - while developing polymer membranes for aqueous alkaline (or basic) systems as part of a collaboration with co-author Yet-Ming Chiang, a principal investigator in JCESR and Kyocera Professor of Materials Science and Engineering at the Massachusetts Institute of Technology (MIT).

Through these early experiments, the researchers learned that membranes modified with an exotic chemical called an "amidoxime" allowed ions to quickly travel between the anode and cathode.

Later, while evaluating AquaPIM membrane performance and compatibility with different grid battery chemistries - for example, one experimental setup used zinc as the anode and an iron-based compound as the cathode - the researchers discovered that AquaPIM membranes lead to remarkably stable alkaline cells.

In addition, they found that the AquaPIM prototypes retained the integrity of the charge-storing materials in the cathode as well as in the anode. When the researchers characterized the membranes at Berkeley Lab's Advanced Light Source (ALS), the researchers found that these characteristics were universal across AquaPIM variants.

Baran and her collaborators then tested how an AquaPIM membrane would perform with an aqueous alkaline electrolyte. In this experiment, they discovered that under alkaline conditions, polymer-bound amidoximes are stable - a surprising result considering that organic materials are not typically stable at high pH.

Such stability prevented the AquaPIM membrane pores from collapsing, thus allowing them to stay conductive without any loss in performance over time, whereas the pores of a commercial fluoro-polymer membrane collapsed as expected, to the detriment of its ion transport properties, Helms explained.

This behavior was further corroborated with theoretical studies by Artem Baskin, a postdoctoral researcher working with David Prendergast, who is the acting director of Berkeley Lab's Molecular Foundry and a principal investigator in JCESR along with Chiang and Helms.

A screen test for better batteries 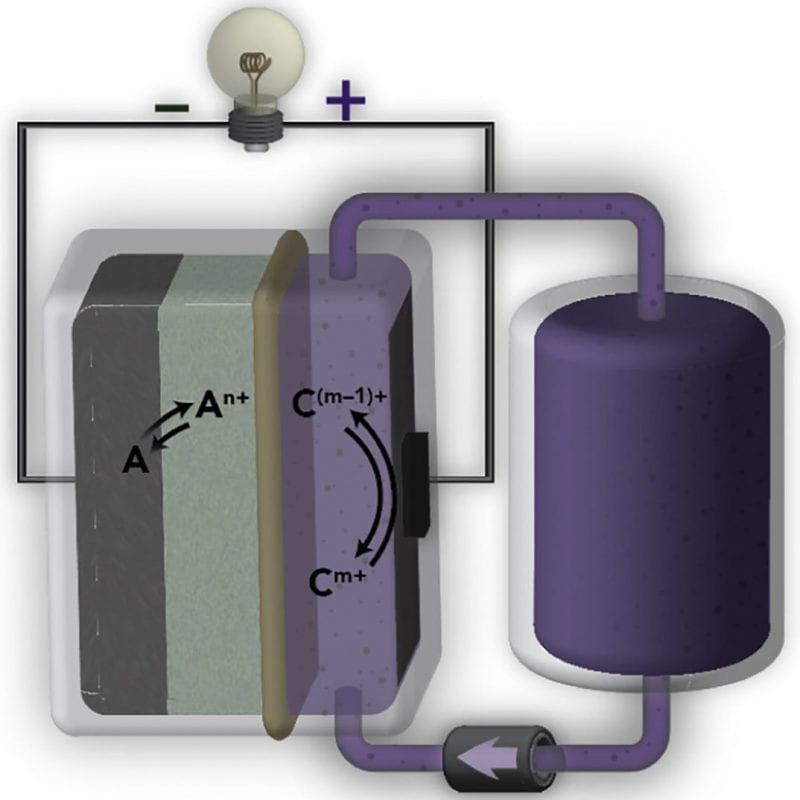 "Typically, you'd have to wait weeks if not months to figure out how long a battery will last after assembling the entire cell. By using a simple and quick membrane screen, you could cut that down to a few hours or days," Helms said.

The researchers next plan to apply AquaPIM membranes across a broader scope of aqueous flow battery chemistries, from metals and inorganics to organics and polymers. They also anticipate that these membranes are compatible with other aqueous alkaline zinc batteries, including batteries that use either oxygen, manganese oxide, or metal-organic frameworks as the cathode.

Portions of the work, including polymer synthesis and characterization, were carried out at Berkeley Lab's Molecular Foundry, a DOE Office of Science User Facility that specializes in nanoscale science.

The study also used GIWAXS (grazing-incidence wide angle X-ray scattering) instruments at the ALS to characterize the AquaPIMs, and supercomputing resources at NERSC to model the polymer. The ALS and NERSC are DOE Office of Science User Facilities.