A recent study, affiliated with Ulsan National Institute of Science and Technology (UNIST), has introduced a novel electric vehicle (EV) battery technology that is more energy-efficient than gasoline-powered engines. The new technology enables drivers to simply have their battery packs replaced instead of charging them, which ultimately troubleshoot slow charging problem with the existing EV battery technology. It also provides lightweight, high-energy density power sources with little risk of catching fire or explosion.

This breakthrough has been led by Professor Jaephil Cho and his research team in the School of Energy and Chemical Engineering at UNIST. Their findings have been published in the journal Nature Communications.

In the study, the research team has developed a new type of aluminum-air flow battery for (EVs). When compared to the existing lithium-ion batteries (LIBs), the new battery outperforms the others in terms of higher energy density, lower cost, longer cycle life, and higher safety.

Aluminum–air batteries are primary cells, which means they cannot be recharged via conventional means. When applied to EVs, it will produce electricity by simply replacing the aluminum plate and electrolyte. Considering the actual energy density of gasoline and aluminum of the same weight, aluminum is superior. 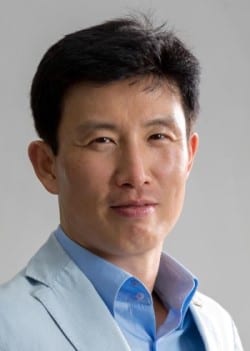 “Gasoline has an energy density of 1,700Wh/kg, while an aluminum-air flow battery exhibits a much higher energy densities of 2,500Wh/kg with its replaceable electrolyte and aluminum,” says Professor Cho. “This means, with 1kg of aluminum, we can build a battery that enables an electric car to run up to 700km.”

The new battery works much like metal-air batteries, as it produces electricity from the reaction of oxygen in the air with aluminum. Metal–air batteries, especially aluminum-air batteries, have attracted much attention as the next-generation battery due to their energy density, which is higher than that of LIBs. Indeed, batteries that use aluminum, a lightweight metal, are lighter, cheaper, and have a greater capacity than a traditional LIB.

While aluminum–air batteries are one of the highest energy densities of all batteries, they are not widely used because of problems with high anode cost and byproduct removal when using traditional electrolytes. Professor Cho has solved this issue by developing a flow-based aluminum–air battery to alleviate the side reactions in the cell, where the electrolytes can be continuously circulated.

In the study, the research team has prepared a silver nanoparticle seed-mediated silver manganate nanoplate architecture for the oxygen reduction reaction (ORR). They discovered that the silver atom can migrate into the available crystal lattice and rearrange manganese oxide structure, thus creating abundant surface dislocations.

Thanks to improved longevity and energy density, the team anticipates that their aluminum-air flow battery system could potentially help bring more EVs on the road with greater range and substantially less weight with zero risk of explosion.

“This innovative strategy prevented the precipitation of solid by-product in the cell and dissolution of a precious metal in air electrode,” says Jaechan Ryu, first author of the study. “We believe that our AAFB system has the potential for a cost-effective and safe next-generation energy conversion system.”

The discharge capacity of aluminum-air flow battery increased 17 times, as compared to the conventional aluminum air batteries. Besides, the capacity of newly developed silver-manganese oxide-based catalysts was comparable to that of the conventional platinum catalysts (Pt/C). As silver is 50 times less expensive than platinum, it is also competitive in terms of the price