Through a new joint venture operating out of Berlin, the German and French companies will co-develop hydrogen electrolyzers for industrial-scale power plants in Europe.

German energy giant Siemens Energy and French industrial gas supplier Air Liquide have formed a joint venture to produce large-scale hydrogen electrolyzers in Europe, serving the market for high-efficiency solutions to harness volatile energy from renewables. Production is set to start next year and steadily scale up to reach a capacity of 3 gigawatts (GW) by 2025.

The operation will run out of Siemens Energy’s upcoming electrolyzer factory in Berlin, set to open in 2023 with 1 GW of production. With Siemens owning a 74.9% share and Air Liquide owning 25.1%, the joint venture will see both parties committing their R&D capacities toward co-developing electrolysis modules (also called “stacks”) for their customers. 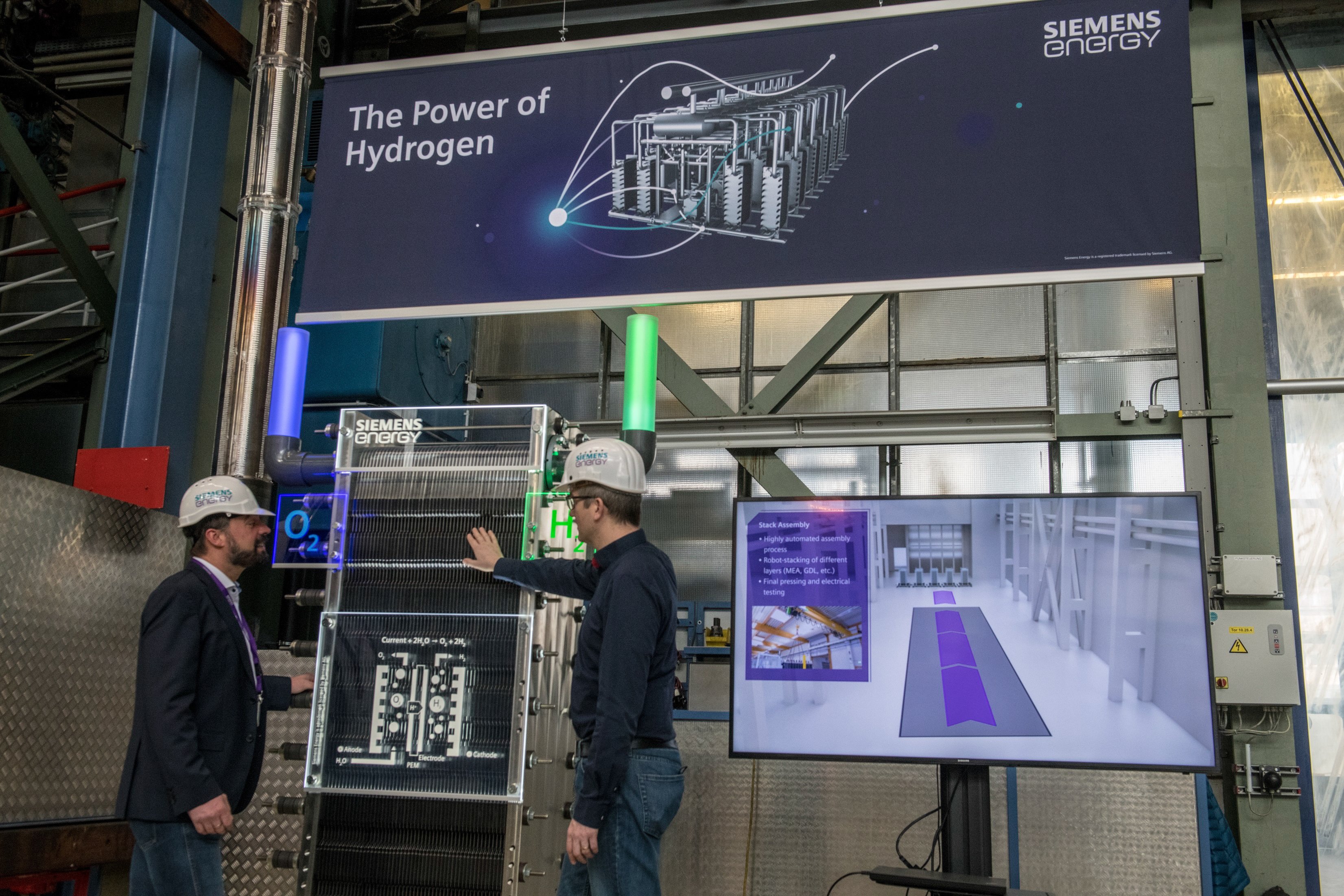 At a new facility in Berlin, Siemens plans to kick off production for industrial hydrogen electrolyzers next year. Image used courtesy of Siemens Energy

PEM electrolysis involves separating water into hydrogen and oxygen via a proton-permeable membrane and renewable-sourced electricity. Siemens says that unlike conventional alkaline electrolysis, PEM is best suited to harvest volatile energy generated from renewable energy sources, including wind and solar. 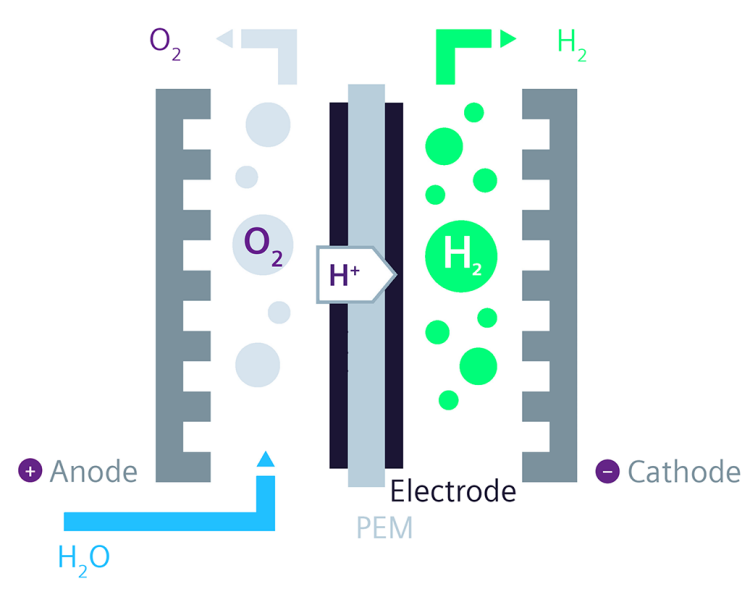 Still, most hydrogen generation is currently based on a fossil fuel-heavy process known as steam methane reforming, a chief reason the fuel’s use for renewable energy has been met by both investment and skepticism in the clean energy sector.

And while Siemens says its electrolyzers are designed to utilize volatile renewable energy, that does not necessarily guarantee that producers will do so. Electrolysis is driven by electrical energy, regardless of source, so producers could in theory burn fossil fuel to drive generation at their plants.

“In principle, it does not matter whether it is renewable electricity,” said Claudia Nehring, a spokesperson at Siemens Energy Global.“Ultimately, this is decided by the hydrogen producer who uses our electrolyzers.”

But Nehring noted that fossil-fuel powered electrolysis makes little sense economically, as simply utilizing natural gas to produce gray hydrogen via steam reformers is much cheaper. She added that the venture’s projects are explicitly powered by sustainable hydrogen, in line with its aim to establish a green hydrogen economy in Europe.

“The current projects in the joint venture's project pipeline are projects for the production of sustainable hydrogen based on renewable energy, and we intend to continue to apply for such sustainable hydrogen projects in the future,” Nehring said. “For us, hydrogen is a key element of the energy transition and for decarbonizing other sectors such as industry and mobility through sector coupling, provided it is produced with renewable energies.”

Siemens markets its Silyzer 300 lineup of PEM electrolysis systems for large-scale industrial plants. According to its technical data, the system yields 75.5% plant efficiency with 100 to 2,000 kilograms of hydrogen production per hour. 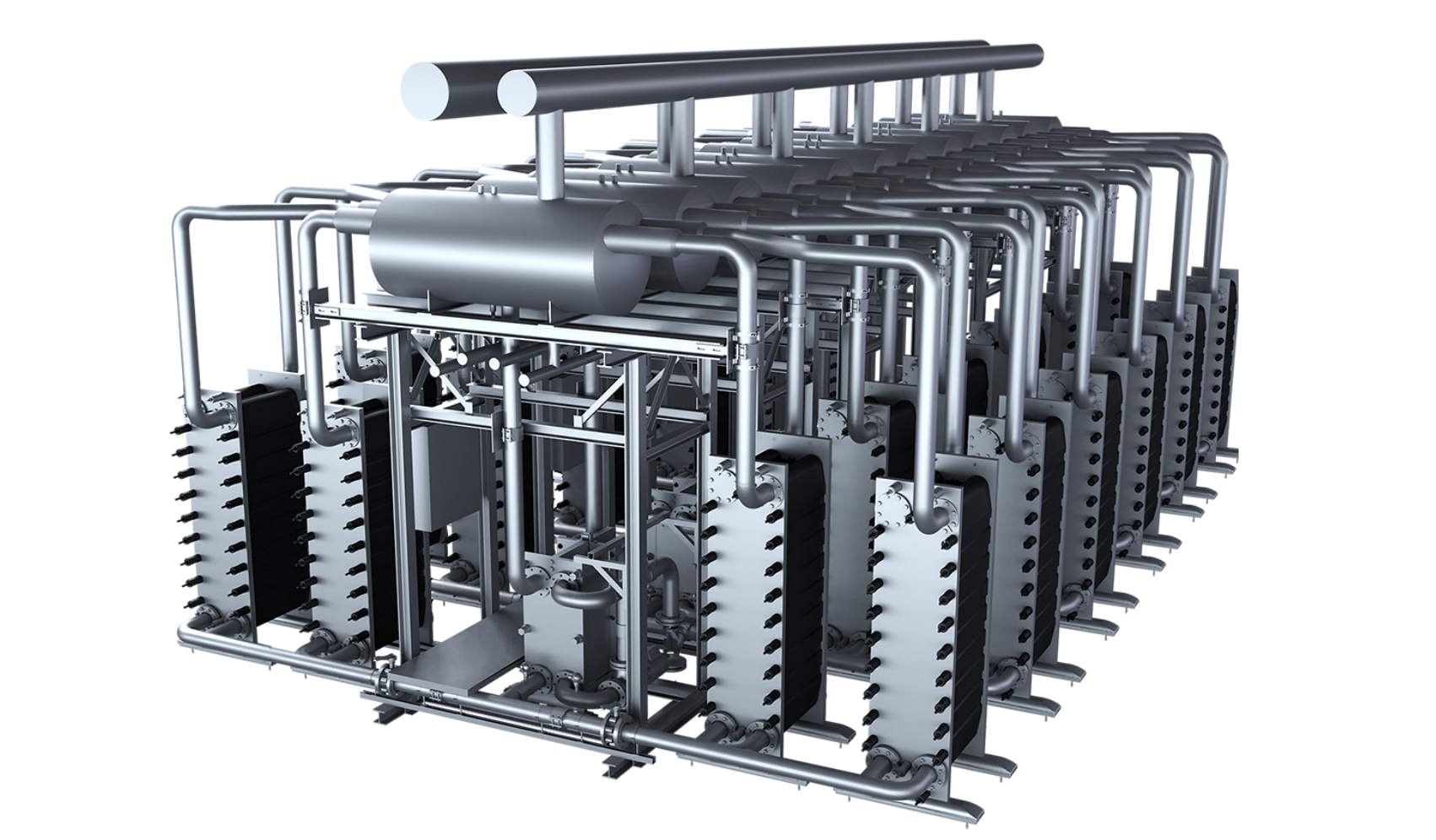 Though the joint venture formally debuted last month, Siemens Energy and Air Liquide first announced their electrolyzer partnership in February 2021, with the parties applying together for large-scale project funding under the European Union’s Innovation Fund and Important Project of Common European Interest (IPCEI) program—both huge sources of hydrogen funding under the EU’s purview. 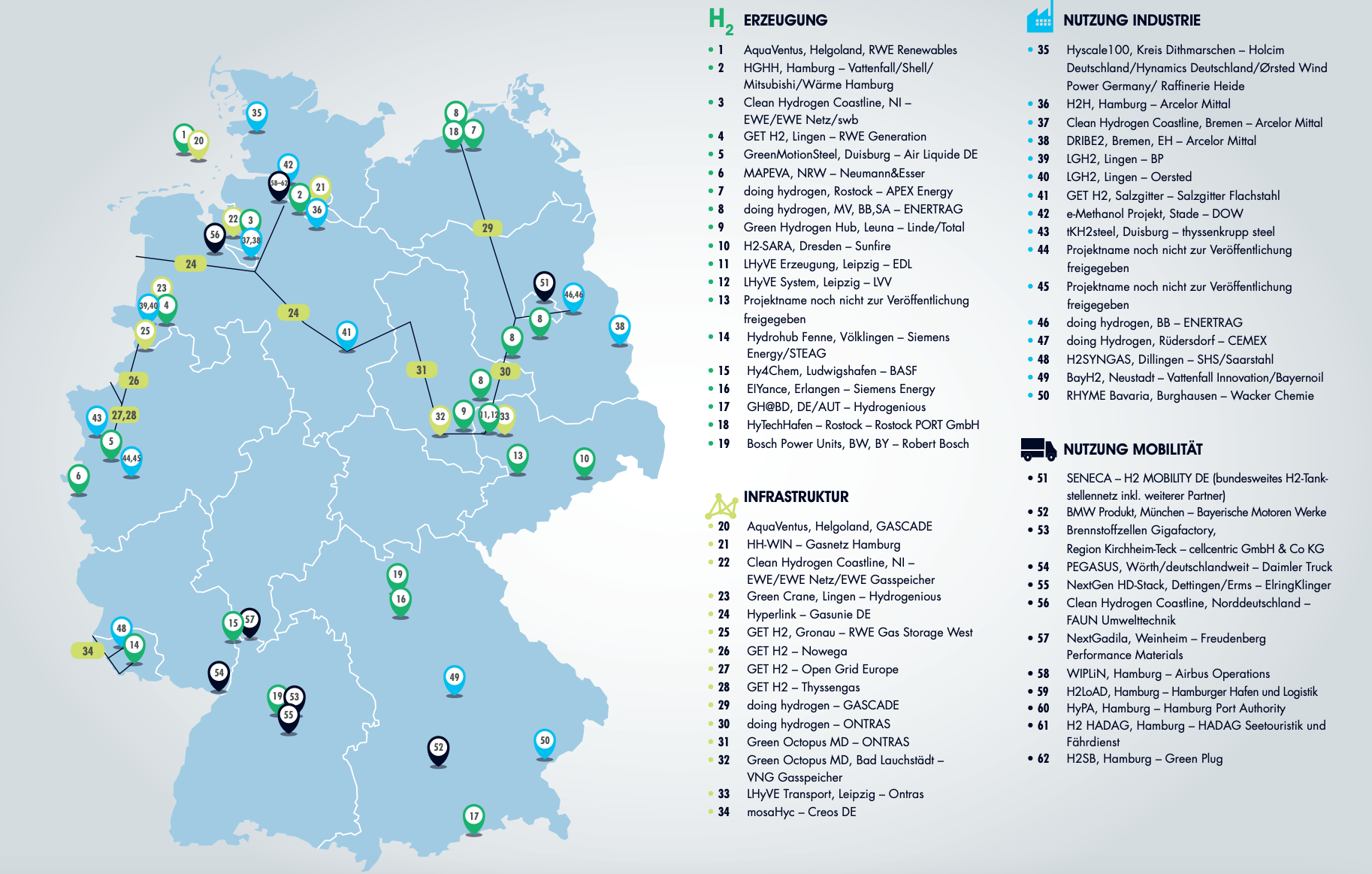 The IPCEI is exploring numerous hydrogen projects in Germany, two of which were proposed by Siemens. Image used courtesy of IPCEI

The EU’s Innovation Fund signed its latest round of grants for large-scale projects last March, only one of which focused on green hydrogen production: Finnish oil refining company Neste Oyj received 88 million euros (about $90 million USD) to launch its Sustainable Hydrogen and Recovery of Carbon project to reduce emissions at one of its refineries.

Last year, the EU set a goal to reach 40 GW of electrolyzer capacity by 2030, which would generate 10 million metric tons of renewable hydrogen annually. In the shorter term, it’s aiming for 6 GW by 2024. While global electrolyzer capacity was only 0.3 GW in 2020, Europe’s planned electrolysis capacity additions outpace that of any other region, with more than 1.3 GW under development.

Investments Seek to Drive Down Cost

About five months later, Siemens announced its hydrogen electrolyzer plant, which will open next year with new production lines spanning 2,000 square meters at an expense of about 30 million euros. 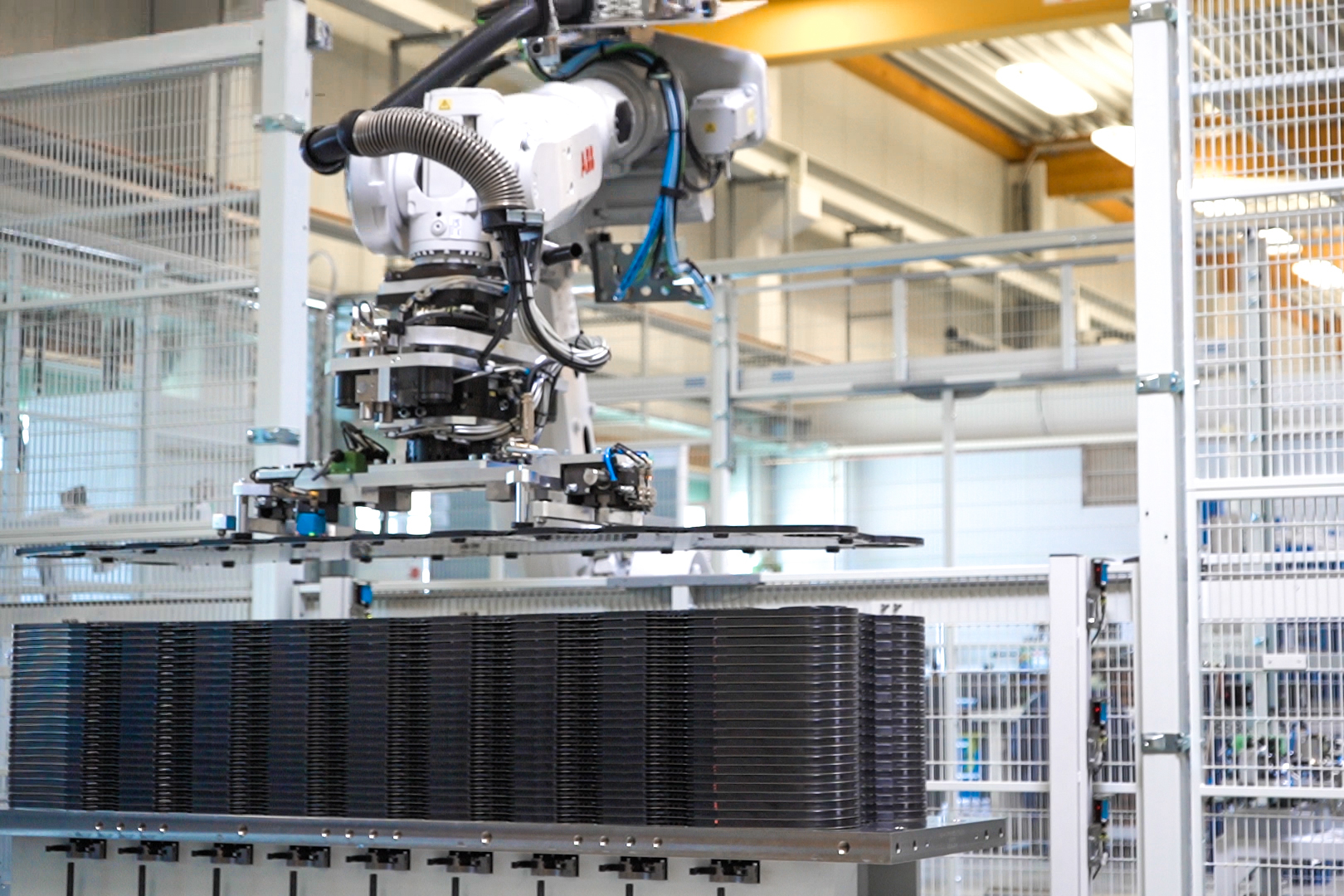 In the announcement last March, Bruch stated, “For [hydrogen] to be economically viable, the manufacturing costs for electrolyzers must be significantly reduced. With our new production facility, we are helping to make hydrogen competitive sooner.”

Still, Siemens has several other major hydrogen projects completed or in the works. In Germany, it’s currently building the largest renewable-based hydrogen generation plant, which will serve as the first commercial debut of its latest electrolysis product line. The plant will produce up to 1,350 metric tons of renewable-based hydrogen per year for both industrial and mobility applications. Siemens also established its first green hydrogen production project in China back in 2020, and earlier this year, it announced a 50 MW, carbon-neutral eMethanol electrolyzer plant in Denmark. 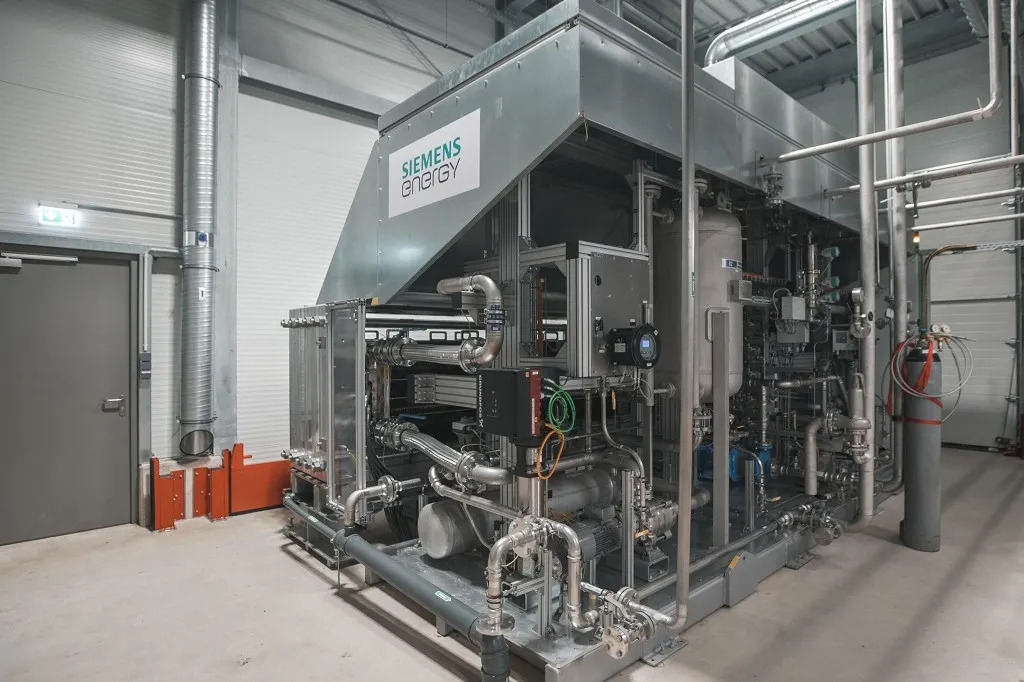 Air Liquide, meanwhile, recently inked a 50-50 joint venture with Groupe ADP to work with airports on adjusting their infrastructure in preparation for upcoming hydrogen-powered aircraft.