Also today, the DOE announced the selection of 10 projects as part of a new Advanced Research Projects Agency-Energy (ARPA-E) program, Duration Addition to electricitY Storage (DAYS). Awardees will develop energy storage systems to provide reliable, affordable power to the electric grid for up to 100 hours, enhancing grid resilience and performance.

"The Department of Energy is committed to researching innovative energy technologies and discovering opportunities to make America's energy infrastructure more competitive and more secure," said Under Secretary for Science Paul Dabbar. "The DAYS awardees will take a good look at what tomorrow's grid-scale storage could be, and work to develop the technologies that get us there."

DAYS project teams will work to combine the long-term power output of technologies like pumped storage hydroelectric (PSH) systems with the flexibility of battery systems that can be deployed in multiple environments. PSH power provides more than 95% of stationary electricity storage capacity on the U.S. grid today, but there have been few new installations due to geographical and financial challenges.

Lithium ion batteries, meanwhile, have experienced a rapid growth in deployment on the grid, but high cost limits viability in long-duration applications.

"Improvements in battery performance are paramount to the future of both transportation and the electric grid," said Under Secretary for Science Paul Dabbar, speaking today at the Innovation XLab Energy Storage Summit at SLAC National Accelerator Laboratory. "JCESR is one of our most important centers of discovery and innovation for electrical energy storage and will be critical in laying the scientific groundwork for the next generation of battery technology." 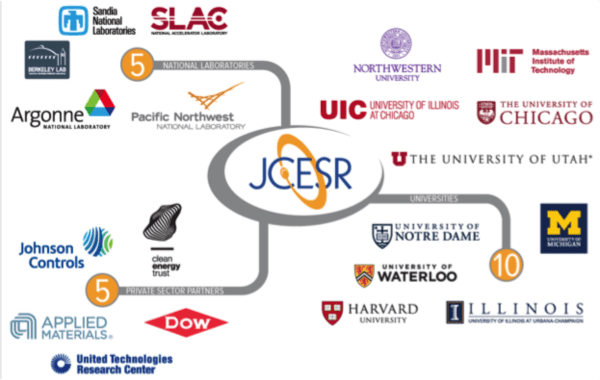 Established in December 2012 by the Department's Office of Science, JCESR assembled a team of top experts from multiple disciplines and over a dozen leading laboratories and institutions of higher learning to tackle some of the biggest scientific challenges in electrical energy storage.

During its first five years, JCESR demonstrated a new class of membranes for flow batteries; made substantial progress in establishing the scientific foundations for batteries based on doubly-charged magnesium instead of singly-charged lithium; and developed computational tools that screened over 24,000 potential electrolyte and electrode compounds for new battery concepts and chemistries.

The center also produced more than 380 peer-reviewed publications and over 100 inventions at various stages of the patent process.  Three new start-up companies were created through licensing of JCESR technology.

Future efforts at JCESR will focus on developing new battery materials "from the bottom up" using principles rooted in a detailed understanding of matter at the atomic and molecular levels.  Emphasis will be on the development of multivalent battery designs, capable of significantly higher energy capacity than today's lithium-ion batteries, as well as on new concepts for so-called flow batteries for the electric grid.

DOE's decision to renew JCESR followed a successful review of its first five years' performance by a panel of outside peer reviewers convened by DOE in July.  Funding for JCESR in Fiscal Year 2018 will total $24 million, with outyear funding contingent on congressional appropriations.